TinyMart is sharing this content, the original was posted on Lonely Planet by Tim Richards, Feb 28, 2014 • 6 min read Lonely Planet Writer So please click here to go there
.

Viva Las Vegas! When Elvis Presley sang those words 50 years ago, he captured the essence of the famous desert resort city. Vegas is always full of life, from the surging crowds along the sidewalks of The Strip to the dramas playing out around the tables in its many casinos. There comes a time, though, when the party has to stop – or at least pause. When your gambling fund is extinguished, the endless neon signage looks garish, and the theme-park facades seem tacky. Then it’s time for a traveller to do what a traveller’s gotta do – get out of town and explore Nevada.

Most visitors to Vegas don’t see much of the surrounding state, merely glimpsing it in flight. But rural Nevada is a fascinating patchwork of desert landscapes, mysterious government installations and small towns with loads of Western character.

Here’s a three-day driving itinerary, looping out of Vegas. 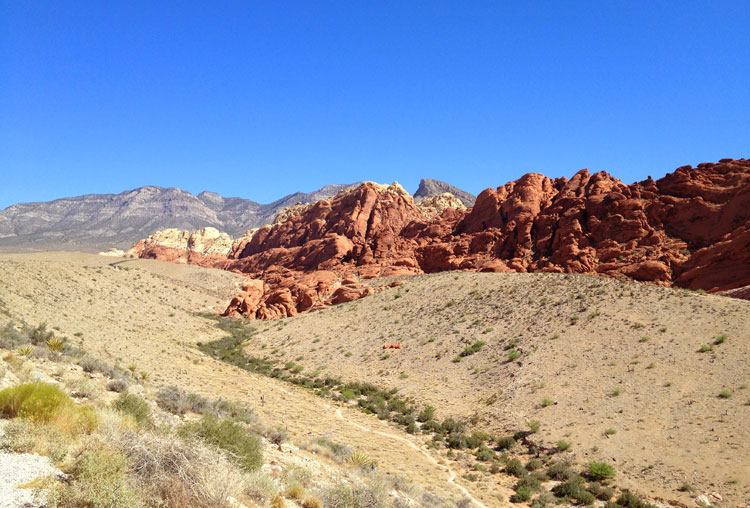 A short drive west of Las Vegas is the Red Rock Canyon National Conservation Area, a perfect place to start this urban detox trip. Part of the Mojave Desert, this dry landscape is dominated by spectacular red sandstone formations. From the visitor centre, there’s a great view of a long rusty red stretch of rock contrasting boldly with the dry landscape dotted with spiky-leaved yucca plants.

Take a stroll along the marked walking trails circling out from the visitor centre, but keep in mind local ranger Jim Cribbs’ advice about rattlesnakes: 'Give them 10 feet of distance and they’ll leave you alone. You pick up a rattlesnake by its tail, it’ll bite you. They have no sense of humour.'

Heading northwest, there’s mystery to starboard as you pass along the edge of the Nellis Air Force Range, a secretive area holding both a former nuclear weapon test site and the mysterious Area 51, linked with UFOs by excitable conspiracy theorists. 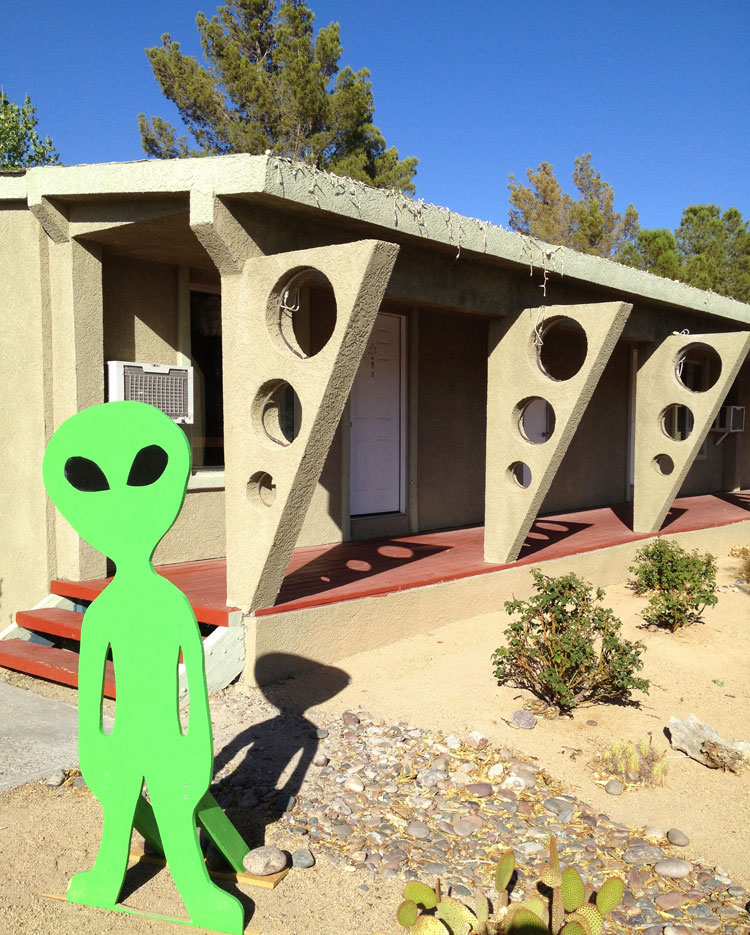 To extend the UFO theme when you arrive in the town of Beatty (www.beattynv.info), check in to the Atomic Inn (www.theatomicinn.com). Making the most of the Area 51 mythos, this retro motel decorates its grounds with models of aliens and unexploded bombs.

From Beatty, it’s a few minutes’ drive to the eerie Gold Rush ghost town of Rhyolite. Abandoned in the 1920s after the gold ran out, its streets are dotted with crumbling buildings such as the former railway station and a house made entirely of bottles. 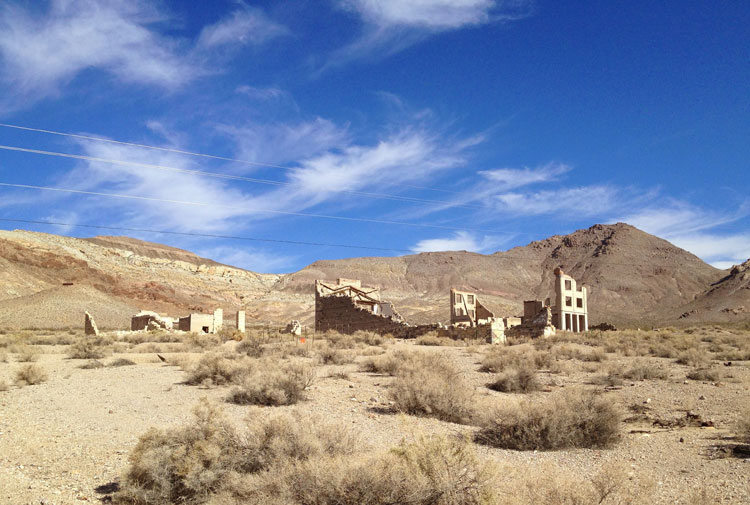 At the bottom of the township is the Goldwell Open Air Museum, its impressive artworks set against the stark landscape under a big blue sky.

To finish the day, visit one of the cowboy-themed saloons in Beatty. There’s an element of showmanship at work here – the symbol of the Happy Burro (www.facebook.com/pages/Happy-Burro-Chili-Beer) is 'Whiskey Pete', a flamboyant fellow you may actually meet at the bar. Nearby, KC’s Outpost (kcsoutpost.com) puts on an entertaining cowboy-themed barbecue and show. 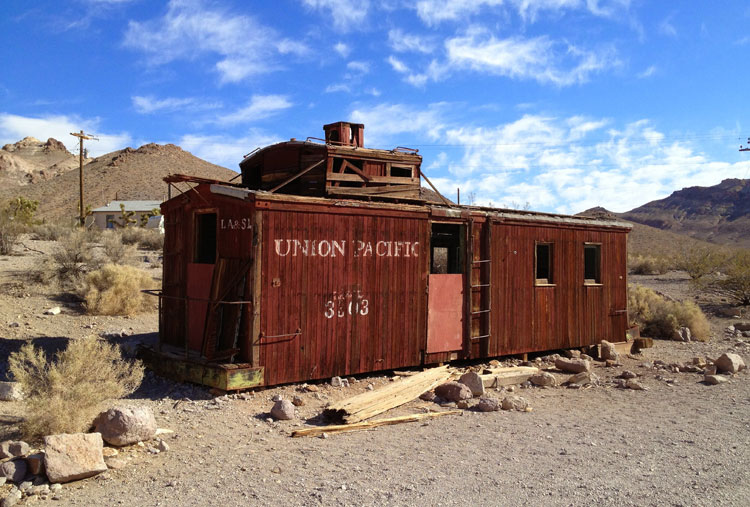 Day 2: immerse yourself in history at a mining boom town

Drive north toward Tonopah (www.tonopahnevada.com), checking out the semi-ghost town of Goldfield (www.goldfieldhistoricalsociety.com) on the way. There are still a few hundred people living here, but its streets are lined by grand buildings from when the town had a population of 20,000 a century ago; the old fire station is particularly impressive.

At Tonopah, check in to the Mizpah Hotel (www.mizpahhotel.net). This beautifully restored 1907 hotel is another remnant of the mining boom days, with a spacious saloon and a resident ghost, the so-called Lady in Red.

Tonopah’s economic ups and downs since its silver mining glory days have produced a streetscape that’s a delight for the photographer. With not a modern chain store in sight, it’s a collection of shopfronts which resemble the small-town America of the movies: including the Kozy Korner Deli, the Tonopah Liquor Co, the austere US Post Office building, and the A-Bar-L Western Store for all your cowboy clothing needs.

To understand more of the town’s history, drop into the interesting Central Nevada Museum (www.tonopahnevada.com/CentralNevadaMuseum.html), as well as the Tonopah Historic Mining Park (www.tonopahhistoricminingpark.com) in the hills above the town.

After dinner at the Mizpah, step outside and look to the skies. As the town is set high in the San Antonio Mountains with little light pollution, Tonopah is said to have the clearest night skies in the USA. Once a month, the Tonopah Astronomical Society (tas.astronomynv.org) holds a public stargazing session in the town’s Highland Park. 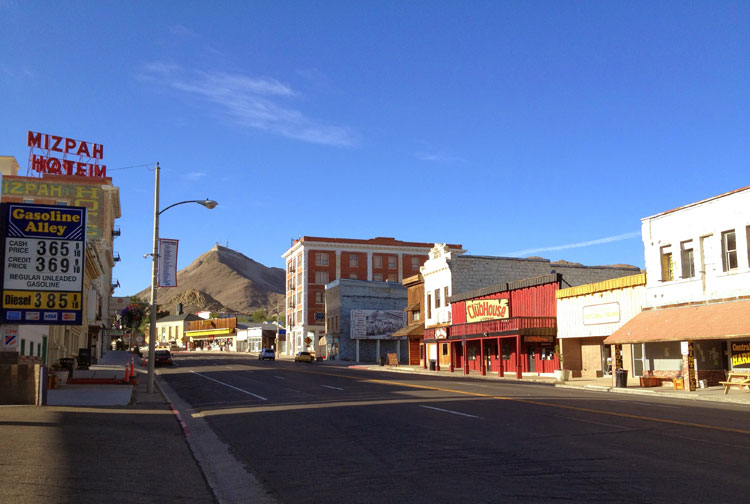 Drive south and west across the California state line into Death Valley National Park, to Scotty’s Castle. This amazing Spanish-style mansion, originally known as Death Valley Ranch, is a fascinating place to visit.

It was built by millionaire Albert Johnston in the 1920s, after his wife Bessie complained of the lack of suitable accommodation during their visits to the area. The reason Johnston came to Death Valley in the first place was a confidence trick perpetrated by Walter 'Scotty' Scott, who persuaded the rich man to invest in a fraudulent gold mine. Amused rather than annoyed, Johnston struck up a friendship with Scotty and later played along with the myth that the flamboyant conman owned the mansion (in fact, he lived in a hut some distance away). 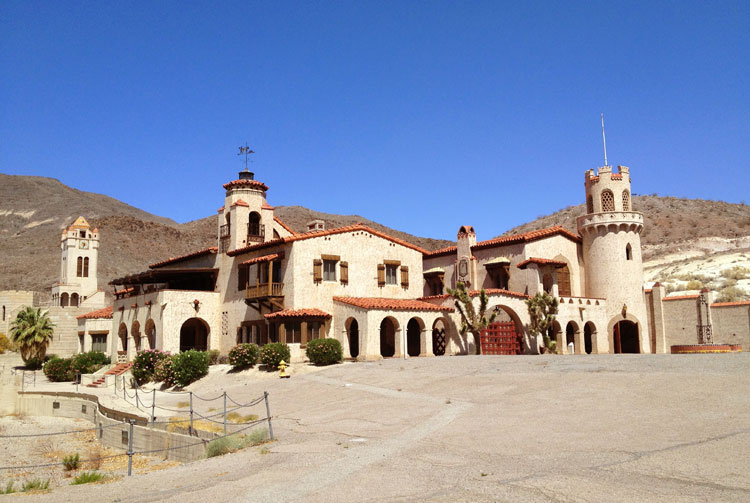 Tours of the house are conducted by National Park Service guides dressed in period costume, and are a fascinating insight into the lifestyles of the rich and eccentric back in the Roaring Twenties.

Now the wilderness awaits. Drive south through the remarkably arid Death Valley. Stop at Furnace Creek Ranch for lunch, then drive on to Zabriskie Point. This striking hump-shaped ridge can be viewed from a high observation point opposite.

Finally, drive to nearby Badwater Basin. Sitting at 86m below sea level, this aptly named salt flat is the lowest point in North America. Standing on the boardwalk within the basin on a summer’s day is like being inside a fan-heated oven. It’s a startling exposure to one of nature’s greatest extremes; the temperature in this part of Death Valley has been recorded as high as 57°C (134°F).