TinyMart is sharing this content, the original was posted on Lonely Planet by ﻿Catherine Bodry, Apr 14, 2014 • 4 min read, Lonely Planet Writer So please click here to go there
.

A road trip of Interior and Southcentral Alaska is an excellent approach for discovering the regions’ best sights: the tallest mountain in North America, the largest wild salmon in the world as well as a myriad of adventures. And almost every town from Fairbanks to Homer is home to at least one brewery offering après adventure ales.

Many beers are named after local sights; consider choosing your own adventure by letting beer be your guide.  Following is a framework for a brewery-centered road trip.

Begin north of Fairbanks in Fox at the Silver Gulch brewpub (silvergulch.com) – the northernmost brewery in the United States. Brewed with local spring water, the Silver Gulch’s beers were originally started in five-gallon batches and have now expanded to 750 gallons. Should you be brave enough to visit in winter, warm up with a 40 Below Imperial Stout, follow it with a Northern Light ale and then head outside to watch the aurora borealis dance across the cold night sky.

Drive south along the Parks Highway to Talkeetna, whose brewery celebrates the sky-filling view of Mt McKinley. The brewery’s name, Denali Brewing Company (denalibrewingcompany.com), alludes to the local name for the highest mountain in North America. Talkeetna serves as the base for mountain climbers attempting Denali but also offers packrafting and river tours of the glacier-silted Susitna.

Sample a Flag Stop 2, and then go hitch a ride on the last flag stop train in America, a two-car train that services cabins and folks heading into the backcountry to raft, hunt or fish.

Near the southern end of the Parks Highway is Wasilla, hometown of 2008 Vice Presidential candidate Sarah Palin. Here, the Last Frontier Brewing Company (lastfrontierbrew.com) has nearly a dozen ales named after gold mining obsession. Fuel your own exploration and use Wasilla as a base for discovering Hatcher Pass (named after the prospector and miner Robert Hatcher), where you’ll find the abandoned but preserved Independence Mine set into the mountains.

Once you’re in the state’s largest city, Anchorage, you have more than a half a dozen options for breweries. Don’t miss the Midnight Sun Brewing Company (midnightsunbrewing.com), named after everyone’s favorite summer feature: endless daylight. This brewery offers the widest variety of specialty beers, but the Midnight Sun Kolsch and Sockeye Red IPA are perfect for relaxing in evening sunlight after a day of urban salmon fishing.

Don’t miss a post-hike pizza at the Moose’s Tooth (moosestooth.net), the pub and pizzeria for the Broken Tooth Brewing Company. Started by a couple of skiers and climbers in 1996, the brewery and restaurant are named after peaks in the Alaska Range. Grab a six-pack of Chugach Session, a light beer that will refresh you after your own session in the Chugach Mountains behind Anchorage. 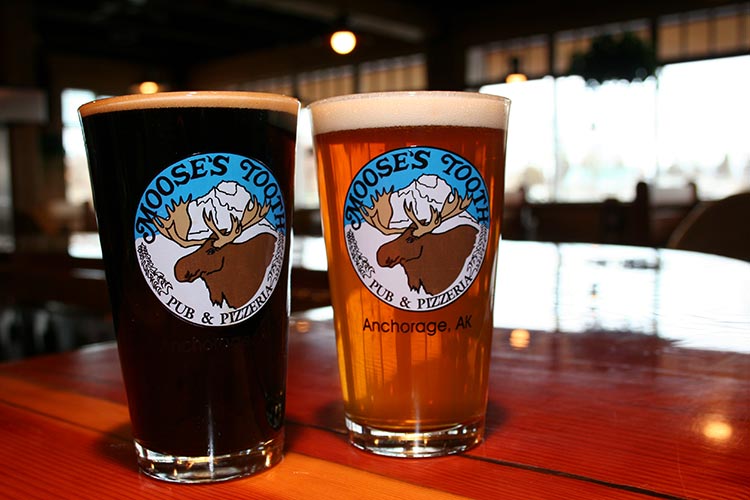 Need soothing after a long hike? Look no further than these burnished beauties at Moose's Tooth. Image courtesy of Moose's Tooth.

Continue driving south along Turnagain Arm, along the Seward Highway and onto the Kenai Peninsula, a mountainous land mass the size of a small European country. You’ll turn right onto the Sterling Highway as you descend from the Kenai Mountains. Right as you pull into Soldotna, you’ll hit St Elias Brewing Company (steliasbrewingco.com). Soldotna is famous for its salmon fishing in the Kenai River, where a record king salmon – over 97 pounds – was caught in 1985. St Elias is a perfect respite from the crowds of anglers on the river. Their four permanent taps allude to activities in the area other than fishing: Puddle Jumper Pale Ale might inspire you to take a floatplane tour (small floatplanes in Alaska are often referred to as 'puddle jumpers' for the short distances they travel), or the Even Keel Kolcsh could encourage you to step off the banks of the river and take a float down it instead.

Swing north out of Soldotna and into Kenai where Kassik’s Brewing Company (kassiksbrew.com), a respected operation, crafts the Alaskan favorite Morning Wood IPA. Not sure what to do in Kenai? Go caribou spotting and then relax with a Caribou Kilt scotch ale (save the kilt for after the outdoors – the mosquitos are vicious!). You might need to be brave, so you can find liquid courage in the Big Nutz Imperial Stout. If you’re seeking a break from the wilderness, pop into the Kassik’s Kenai Brew Stop for a tour (every other Friday and by appointment).

Also in Kenai is the Kenai River Brewing Company (kenairiverbrewing.com). Their Arctic XPA is popular throughout Alaska, and the Skilak Scottish reminds you of massive Skilak Lake, full of boating opportunities nearby: like the lake, the beer is deep and rich.

Finally, at the end of the road is Homer Brewing Company (homerbrew.com), an understated operation just like its hometown. But don’t let its simple digs fool you; the brewing company has been a mainstay for 18 years. Homer, the 'Cosmic Hamlet by the Sea', has a bounty of mountains across glittering Kachemak Bay – a whole world of recreation available to the traveler who makes the trip across the water. Follow the China Poot Porter’s lead and climb the namesake mountains, easily visible as the tallest, pointiest peak across the bay.