TinyMart is sharing this content, the original was posted on Lonely Planet by ﻿Dominic Bonuccelli, Nov 10, 2009 • 3 min read Lonely Planet Writer So please click here to go there
.

Festivals, food and sport are three primal passions of the Spaniards, and often they're fused together in chaotic fiestas where launching foodstuffs is the sport, like the Tomatina festival in Valencia, and the hurling of flour and eggs at the Chupinazo in Pamplona. Similarly, the La Rioja region, Spain's wine capital, internationally noted for its whites, red and rosados, holds a Bacchanalian bombardment every year during a multi-day celebration of Saint Peter. There are massive communal meals, concerts and bull-jumping events. But in the Batalla del Vino, the artillery is red red wine. 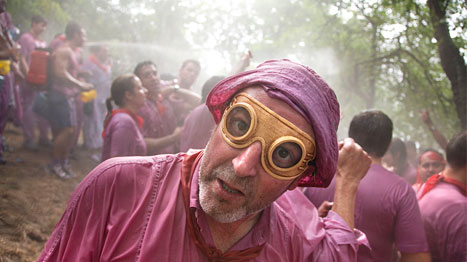 Early on the morning of June 29, I wandered out of Haro toward distant, fog-shrouded Mount Bilibio amid a drunken sea of white-linen-clad crazies. Tractors, flatbeds, and ice-cream trucks with radios blaring picked up as much human cargo as possible, depositing us at the base of the rock, where purple streams trickled down the path, a heavenly scene of wine flowing from the hills. A fellow warrior and his son Mario informed me the river was better ten years ago when a local tycoon rented a helicopter with a water cannon and peppered the procession with sweet libation from the skies. As the fog burned away, I saw a snaking line of purple zombies wandering down the hill, shell-shocked from the vitriol of the vine. I hastened my step and flung headlong into my first Wine War. 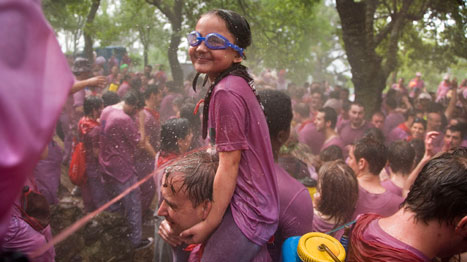 Praise be to Bacchus I had the foresight to bring a hat and goggles, for the air was so thick with spirits you could scarcely spot the sniper in front of you. I took cover behind a Spanish policeman but was fragged with friendly fire in the back by my 'friend' Mario, replete with super-soaker and impish grin. Pesticide sprayers, water pistols, buckets, barrels and baseball hats were loaded to the gills with wine and flung furtively at the masses. Cameramen, reporters and foreigners were favourite fodder. But I was battle-ready, or so I thought: my camera had been Macgyvered diligently with garbage bags and ziplocs, rubber bands and plastic, so I could endure the onslaught til drunk or dry. 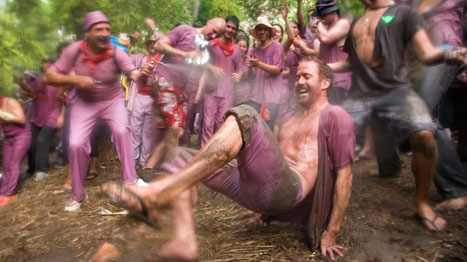 I muay-thaied my way to the middle of the moshpit, past purple trumpeters and moist musketeers, terrified Brits and piggy-backing pigtailers, and clung to a tall tree. Getting a hoist from a Belgian, I vaulted to a branch for what I thought would be the shot of the festival. And it was, but sadly it wasn't the photo, it was me. I was the supreme target, the goofy foreigner stuck in the pine. Burgundy blasts and Gran Reserva rat-a-tat-tat erupted from all directions; within seconds I was drenched and the camera was shutting itself down. The last photo I salvaged was of a man who resembled Dionysus, fists in the air, laughing. I fell off the branch into the throbbing mass of dancing crimson humanity. 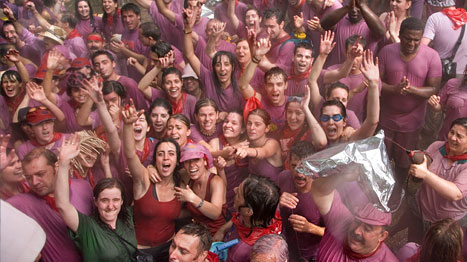 For a Catholic festival of excess, hedonism and wild abandon, the Batalla del Vino went off incredibly smoothly: no lacerations, no arrests, no public nudity. The Spanish seem more able than most to strike that balance between the sacred and the profane, the pious and the primal. It was communal catharsis and release, a farcical war of waste, after which the normally industrious Riojans could return to another year of tranquil productivity.

Dominic Bonuccelli travelled to Spain on assignment for Lonely Planet. You can follow his adventures on Lonely Planet: Roads Less Travelled, screening internationally on National Geographic.