What Does Pride Mean in a Battleground State Regarding LGBTQ+ Rights?

TinyMart is sharing this content, the original was posted on shondaland.com by Malcolm Venable, Jun 9, 2022 So please click here to go there
.

How various groups are responding to the “Don’t Say Gay” bill and questioning if it compromises Florida’s reputation as a queer playground. 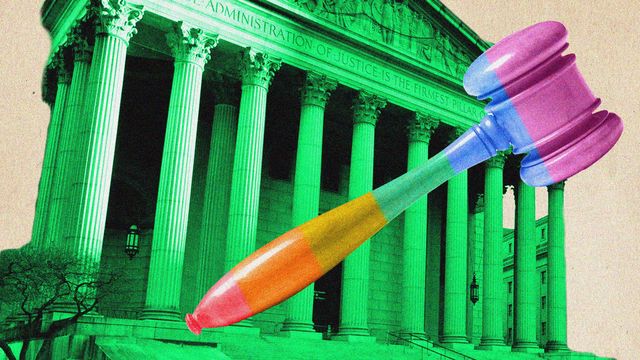 Pride Month, which occurs every June, has by and large been a time for reflection but also for lots of parties, especially in the seven years since same-sex marriage was legalized in the United States. While there are indeed many more hurdles for LGBTQ people to cross — more protections for gender identity and trans people, most importantly — it’s fair to say most people see Pride Month as a time of parades and fun.

But Pride Month has taken on a new, sobering tone in 2022. Laws viewed as discriminatory to LGBTQ people, particularly trans people, have “skyrocketed,” NBC News reports, from 41 laws in 2018 to 238 in March of this year. Some laws allow discrimination against LGBTQ people under the guise of religious freedom.Others bar trans people from playing sports. Others, like the controversial order in Texas, classify gender-affirming health care for transgender kids, such as medications that delay puberty, a form of child abuse. There’s even a new bill in Texas trying to ban children from watching drag shows.

It’s not an exaggeration to say LGBTQ rights seem to be going backward, even as a record number of queer people appeared on TV in 2022. There’s probably no other place where this new reality is more complicated than in Florida, one of the biggest LGBTQ destinations in the world. From the thriving gay scene in Miami to nearby Fort Lauderdale and on down to Key West, where gay travelers have flocked since the 1970s, to towns like Tampa and Orlando, where more than 150,000 queer people flock annually for “Gay Days” and visit gay-friendly Disney World, Florida has long been regarded as an LGBTQ haven.

Yet the imaginary rainbow flag that seems to fly over the state lost some of its luster in March when Florida Governor Ron DeSantis signed a “Parental Rights in Education” bill that banned public school teachers from discussing sexual orientation or gender identity with kids in grades kindergarten through third grade and, after the third grade, mandated that conversations be “age appropriate.” It goes into effect on July 1. The bill empowers parents to sue a district if they feel their child is being unduly exposed to “inappropriate” ideas and themes. Opponents, who have dubbed it the “Don’t Say Gay” bill, say it’s vaguely worded and essentially bars mention of LGBTQ identity in schools.

Its effects would be wide-reaching. Married LGBTQ teachers wouldn’t be able to mention a spouse. Books with even the most benign mention of sexual orientation are already being banned, such as a popular baby book that was dubbed pornography. At one high school in Seminole County, school administrators attempted to black out photos of students holding a Pride flag in their yearbook.

While the bill has ignited pushback, DeSantis remains popular in the state; some polls show he’s the front-runner in this year’s gubernatorial election.

Yet despite the bill, Florida’s proverbial Pride show goes on, with at least five Pride celebrations taking place around the state — a few of which seem, tonally at least, no different from the shirtless bacchanals they always were in years past. So, how exactly are gay Floridians, baked in sunshine and perhaps spoiled by decades of acceptance, responding to “Don’t Say Gay” and its implications? That depends on whom you ask.

“As a parent, the mood is anger,” says Nadine Smith, who’s the mother of an 11-year-old son and is the executive director of Equality Florida. Recently named one of Time’s 100 most influential people of 2022 thanks to her more than 30 years’ of experience working on behalf of LGBTQ people, Smith tells Shondaland that people are furious and understand that the bill is part of a larger plan. “These things are not happening by accident. We are watching madness — turning public education over to censorship and book banning.”

Members and supporters of the LGBTQ community attend the Say Gay Anyway rally in Miami Beach, Florida on March 13, 2022.

Even more sinister, people who oppose the measure have been labeled “groomers” and pedophiles, language that hearkens back to the “Lavender Scare” era, when the federal government interrogated employees about their sexual orientation, leading to terminations and even suicides. To fight back, Equality Florida adopted three key initiatives, including suing the state, responding to students and educators being harassed, and a public education campaign that includes paid advertising and encouraging people to share their stories and “Say Gay.” “We are losing good teachers,” Smith says. “This is dangerous.”

Hunter O’Hanian, executive director at the Stonewall National Museum, a museum for LGBTQ history and culture in Fort Lauderdale, agrees. “It’s crazy,” he says. “People are shaking their heads.” Museums traditionally don’t operate as activist groups, but the Stonewall Museum is taking action the best way it knows how. It started a “Say Gay” campaign and printed 5,000 buttons with the phrase on them, put out an exhibition of gay history, and opened an exhbition of banned books. “We’re trying to put as much as we can in front of people. People are trying to do the best they can.”

But O’Hanian thinks not everyone in his community is as alarmed as they perhaps should be — particularly young adults (folks in their 20s and 30s) whom the measure won’t affect directly, at least for now. “Young adults are not terribly engaged,” he says. “I think a lot of them feel unempowered. You’re not seeing the level of mobilization like you did after George Floyd.” With one of the highest concentrations of gay couples in the U.S. and a thriving bar/club scene that boasts some 30 watering holes and dance clubs, Fort Lauderdale has afforded gay people a level of safety and comfort that’s allowed them to assimilate, and for many, O’Hanian suggests, the situation hasn’t yet reached a level of alarm.

If the gay bar and club scene might serve as a temperature check on the ground, the mood is mixed. Keith Richard is assistant general manager at the Pub — one of the many gay bars, clubs, and restaurants in Miami’s Wilton Manors neighborhood. A casual, low-key spot where patrons can get $5 drink specials, chicken wings and fries, and see a drag show, the Pub offers a glimpse into how the everyday, working-class locals who make up the community are responding to the bill, and Richard says the community is sort of going about business as usual.

A supporter holds a rainbow fan at the Say Gay Anyway rally in Miami Beach, Florida on March 13, 2022.

“The best way to say how people are reacting is that it’s a two-sided answer,” he says. “Teachers think it’s a stupid bill and wonder how it was even allowed to pass. The younger generation is more confused. When it comes to the very mature crowd, they care, but they’re tired. One of them was like, ‘I’ve done it all; I made it so you have rights.’”

This isn’t to say people who come and hang out for a good time aren’t concerned or taking action. Richard says he heard a drag queen mention “Don’t Say Gay” in her act, and the Pub, like other establishments in the vicinity, does fundraisers, charity work, and the like. But people aren’t marching in the streets just yet, partly for generational reasons, and partly due to being numb from disbelief. Others are shell-shocked, worried about implications for the future.

“We’ve had that conversation about ‘What if they start banning bars?’” Richard says. “It would be like Prohibition. The schools is where it starts. What is this a gateway to? We’re like, we have to keep our eyes and ears open.”

There’s a privileged set of LGBTQ people whose resources can allow them to avoid the harsher realities of discrimination. But Richard, who is Black, is keenly aware of how the erosion of one group’s rights can have chilling implications for others; as such, there’s a lot of anxiety within the community even if that hasn’t turned to action or even unity just yet. “I love my community,” he says. “It’s diverse. But I have heard people say, when the drag queens talked about it, ‘I came for a show, not to be political,’ which is stupid. You have to explain, they’re trying to group us all together.”

O’Hanian agrees. “Among adults, the biggest concern is the wave that’s happening. The overturning of Roe v. Wade, the bigger fear this is part of a larger movement — contraception, multiracial marriage, same-sex marriage. These are all related.”

Edwin Rodriguez writes the names of the victims of the Pulse nightclub shooting at the front of the nightclub building on June 21, 2016 in Orlando, Florida.

In Orlando, about a three-hour drive from Fort Lauderdale, Barbara Poma, owner of the Pulse nightclub, where 49 people were killed in a 2016 shooting, says she’s seeing the LGBTQ community vocally push back. Now executive director of the OnePulse Foundation, which seeks to create a permanent memorial at the site of the LGBTQ club, Poma does not see a direct line between the shooting and this type of legislation. The shooting, she points out, was a terrorist attack as opposed to an act of violence specifically targeting the queer community; Pulse was not the killer’s first choice of a target.

Nonetheless, Orlando has always been LGBTQ-friendly, she notes (its Orange County voted Democratic in five consecutive elections), and outrage led people to march and protest — largely teachers and students. “I have fervent hope in the youth,” she tells Shondaland. “For us old people, I hope we can be loud and be heard, not be silent. But the younger generation will lead. I have great hope in them.”

Indeed, if there’s any group of people who appear most active and mobilized, it’s school students themselves. People of school age have been demonstrative and vocal since the “Don’t Say Gay” was still a proposal. Students led protests, organized walkouts, and held rallies. One student, Zander Moricz, who is openly gay, has become the de facto face of the resistance. As class president at Pine View School in Osprey, he went viral in May for a clever, poignant graduation speech in which Moricz, who boasts a healthy head of spiraled tresses, worked around a directive to not say gay by substituting the word “gay” with “curly hair” instead.

But Moricz’s moves are way more than theater: The graduating senior is now the youngest public plaintiff in a lawsuit filed against the state. “I would definitely say the student bodies are losing their minds,” he tells Shondaland. “People are angry, scared, worried. People really understand the urgency.”

Bound for Harvard in the fall, Moricz plans to continue public advocacy and social-justice work but has mixed feelings about leaving his hometown. His town has become increasingly hostile, he says. “Sarasota used to be a great community hub. And there used to be more of a culture that was accepting. But in recent years, at the school-board meetings when we’ve spoken out, it’s been really hostile and aggressive. It’s been nasty. I’ve definitely not been safe all the time.”

He’s ready to leave, not unlike many graduating seniors who are itching to leave the place they grew up to explore life elsewhere. Yet this experience has made him reevaluate his plans and consider how his personal goals line up with a bigger picture.

“There’s definitely a chance that I’m gonna go to the Northeast, fall in love, and be like, ‘I’m never coming back.’ But as much as I would love to be in California or New York, they don’t need Zander, you know? We cannot be bullied out of our home. We can’t let that happen. Because Florida is awesome. It’s just the politicians that are making it seem otherwise.”