TinyMart is sharing this content, the original was posted on lgbtqnation.com by  Sarah Ashton-Cirillo Tuesday, June 21, 2022, So please click here to go there
.

Russian forces are hunting down gay men, raping and castrating them. We spoke with a war crimes investigator to find out what's happening and what's being done to get justice for the victims. 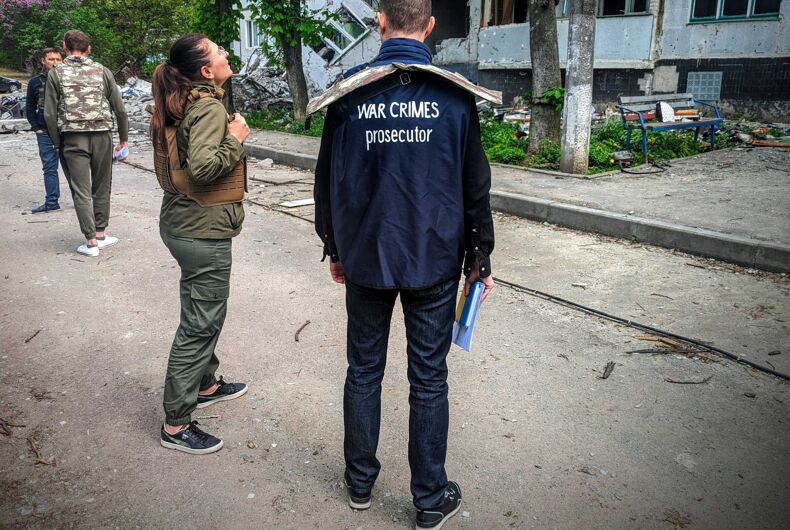 War crimes are a barbaric byproduct of conflict and combat. In an era of near incessant news coverage, the phrase has become a catch-all for heinous acts committed by soldiers and contractors in military theatres across the globe.

Officially defined by the United Nations as “violations of international humanitarian law (treaty or customary law) that incur individual criminal responsibility under international law,” during the almost four months of Russia’s full-scale invasion of Ukraine an unfathomable number of accusations have been levied against the terrorist intruders.

While the war continues, and the toll of the terrorism mounts, Ukrainian authorities have begun a full-scale investigation into the multitude of reports by the civilian population in Ukraine against members of the Russian Army.

The nascent stages of this undertaking have already seen several convictionsincluding one 21-year-old soldier found guilty of murdering an unarmed civilian along with two other soldiers who were each sentenced to almost 12 years in prison for opening artillery fire on nonmilitary targets. Cases have been opened in at least 80 more incidents.

As part of the process, investigators from around the globe have been brought to Ukraine to work with the local and national authorities.

After joining war crimes prosecutors on scene in Kharkiv in May, LGBTQ Nationtraveled to the city of Sumy for two days of conversations with Tim M., an investigator brought in from the United States to help prosecute the atrocities.

Known online as “Captain Peg Leg,” for both his military advisory role in Ukraine and a prosthetic limb, Peg Leg has an extensive history of tracking human traffickers across the globe, specifically those victims who have been taken from Eastern Europe and former areas of the Soviet Union.

Taking a seat at a stout wooden table next to a placid river in the formerly occupied city, Peg Leg began by briefly explaining how he ended up talking to us just down the road from Russia.

“As you know, I spent significant time going in and out of certain countries where young women, including women of Slavic origin, are highly valued and looked at as nothing but commodities. This put me in direct contact with many consulate and embassy officials, including those from Ukraine. When the war broke out, I told some of my friends in the government, just tell me what you need, tell me how can I help, and now here I am.”

After pausing to take a call from an officer in the Sumy Territorial Defense, Peg Leg expounded on what he was already seeing on the ground.

“Without giving away specifics that could compromise the integrity of any investigation, it is much worse than people can imagine in the United States. We have video, we have eyewitness accounts, we have evidence and this is the type of stuff that would be front page news across every newspaper if it happened on some random Saturday night in Las Vegas.”

When asked specifically what the readers of LGBTQ Nation needed to know about what was happening on the ground, Peg Leg broached one issue specifically that is both underreported and severely traumatic no matter where it occurs.

“Let’s talk about a couple of issues that may be of interest to your publication. Male-on-male rape and plans to hunt down and execute gays, lesbians, and anyone different.”

Pushing back against the idea that male-on-male sexual violence is a queer phenomenon, Peg Leg acknowledged that rape is about power and humiliation, not sexuality, “however we know culturally, we know from intel reports, we know from field work that the Russians find homosexuality utterly abhorrent, and against the laws of nature. And so, part of what we have found in the case of male victims of sexual assault, and we have found numerous instances of this, and the cases of rape by men against other men, is that it is driven by the common factors found in every rape but also this sense of subjugating an entire nation because of their so-called western values. These soldiers are psychotic, these soldiers think they are defending culture and religion, while in fact, they are committing crimes that deserve life in prison or worse.”

When asked what he had seen specific to crimes against LGBTQ Ukrainians, Peg Leg discussed the ongoing risk to the community as a whole, inside the larger Russian war effort.

“From just what I have seen, there is a vile anti-gay agenda, which has included desires and plans to, and how do I put this nicely, to castrate and kill gay men. I’d almost, almost call it a hunt in one of the situations I’m aware of, and what I’ve been briefed on, and what we are trying to do, is destigmatize the fear out of being gay, out of being lesbian, so they aren’t afraid of speaking to Ukrainian authorities as witnesses.”

As Peg Leg finished issuing that warning, the young officer who called earlier swung by the hotel to pick him up.

Peg Leg, who was also asked to consult on urban combat planning by the regional administration during his stay in Sumy, completed our interview the following morning after having paused it to conduct field exercises, including criminal evidence retrieval.

“The war is real here, in every part of the country. And crime is part of the war. Whether it is attacking civilians with chemicals, bombs, or acid, it is happening and the bad guys will be prosecuted no matter who they maim, kill, or torture, and I want this message to be very clear, this includes finding justice for every person in Ukraine no matter what gender, no matter who they are sleeping with, just have your readers understand no matter what, we will get justice.”