TinyMart is sharing this content, the original was posted on lgbtqnation.com by ﻿ John Russell Friday, September 2, 2022, So please click here to go there
.

Gov. Glenn Youngkin insisted that how a student will "express their gender" is a choice parents should be making. 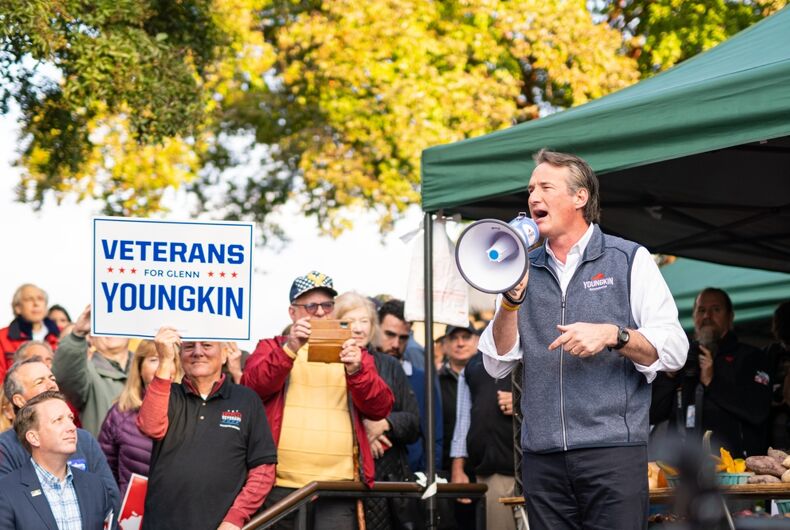 Virginia Gov. Glenn Youngkin (R) called on school officials to out transgender and gender nonconforming students to their parents. Speaking at a “Parents Matter” rally on Wednesday, Youngkin criticized Fairfax County Public Schools’ Regulation 2603, which allows students to use the pronouns, restrooms, and other school facilities that correspond with their gender identity, and does not require school officials to notify parents of students’ transition.

“What’s their name? What pronoun will they use? How are they going to express their gender? This is a decision that bureaucrats in Fairfax County believe that they should be able to make without telling parents,” the governor continued.

Youngkin’s comments drew a rebuke from GLSEN. The organization works to end bullying and harassment based on sexual orientation and gender identity in schools, and has published a guide along with the ACLU detailing the rights of transgender and gender nonconforming students.

“It’s devastating to see politically motivated attempts to break trust between students and educators and to force educators to violate students’ privacy by outing them to guardians,” the organization’s executive director Melanie Willingham-Jaggers said in a statement sent to the Los Angeles Blade. “This kind of hostile school climate puts trans youth at greater risk of harassment, mental health challenges or discrimination. Transgender and nonbinary students need respect and autonomy, not additional scrutiny and policing of their gender identity in school.”

In a separate statement, Equality Virginia blasted Youngkin for targeting transgender students to gain political points. “Transgender and nonbinary students are not going anywhere, and we need to treat them with the respect and care that they deserve,” the statement read. “The governor’s administration needs to hear and really listen to what transgender youth in our schools have to say about their experiences, and ensure that there are policies in place to protect them. By instead making open threats to their rights, the administration is failing transgender students in Virginia and contributing to hostile school environments for our youth.”

So-called “parental rights” in education have recently become a particular flashpoint for conservatives aiming to control what kids learn about and the ideas they are exposed to in schools. The line of attack has led to disruptions atlocal school board meetings across the country, book bans in school and public libraries, and laws restricting the teaching of topics related to race and LGBTQ issues. Florida’s infamous “Don’t Say Gay” law – officially known as the Parental Rights in Education Act – bans any mention of LGBTQ topics at most grade levels.