TinyMart is sharing this content, the original was posted on lgbtqnation.com by Bil Browning, Friday, April 1, 2022 So please click here to go there

He's been mocking trans people for longer than that. 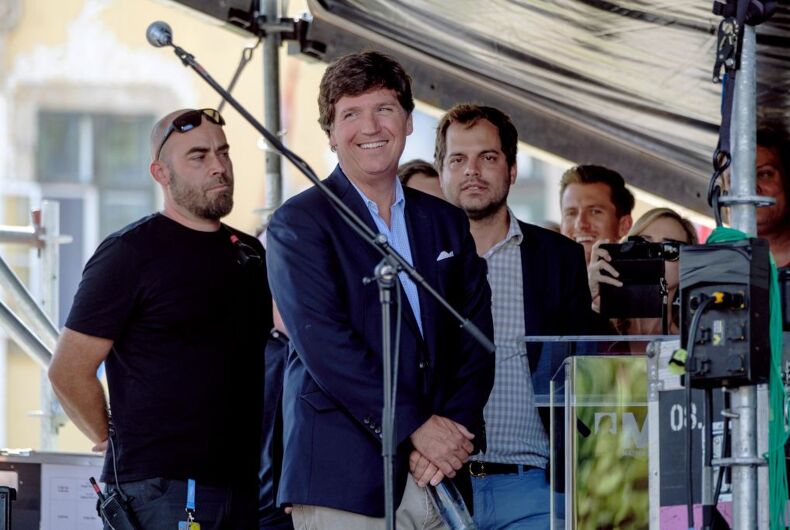 ESZTERGOM, HUNGARY - AUGUST 07: Tucker Carlson on stage before his speech during the Mathias Corvinus Collegium (MCC) Feszt on August 7, 2021 in Esztergom, Hungary. on August 7, 2021 in Esztergom, Hungary. The multiday political event was organized by the Mathias Corvinus Collegium (MCC), a privately managed foundation that recently received more than $1.7 billion in government money and assets. The leader of its main board, Balazs Orban, who is also a state secretary in the prime minister's office, said MCC's priority is promoting "patriotism" among the next generation of Hungary's leaders. (Photo by Janos Kummer/Getty Images)Photo: Getty Images

Fox News host Tucker Carlson has targeted transgender people with disgusting insults and insinuations, but now, even for the notoriously untruthful pundit, he’s conveniently forgotten that.

Related: Women make the best coffee. Here’s how they are transforming the industry

Carlson worked himself up into a froth after President Joe Biden recognized the International Transgender Day of Visibility with a proclamation and tweaks to some government systems to better accommodate transgender and nonbinary people. One of the changes involved trans seniors who were ready to retire.

“So, this administration is standing up for you. And those are words that every American is grateful to hear. But in this case, there’s a caveat,” Carlson whined. “‘You’ means trans seniors. Now, wait a second, you may wonder, as you sit down with your family to celebrate the joy of transgenderism on transgender appreciation day, how many trans seniors are there in this country?”

“No offense, but the trans thing seems pretty new. And if it’s not new, how come no one had ever heard of it before, say, four years ago?” he asked with a serious face.

“And is securing trans rights really the biggest problem that old people in America now face?”

Five years ago in 2017, Carlson got owned on his show by Jillian Weiss, a transgender civil rights attorney who specializes in LGBTQ discrimination cases. No wonder he doesn’t want to remember that trans folks have always existed.