TinyMart is sharing this content, the original was posted on lgbtqnation.com by ﻿ Alex Bollinger Tuesday, September 20, 2022, So please click here to go there
.

In Tucker's world, mentioning LGBTQ people in the presence of children has the same long-term effects that child abuse does. 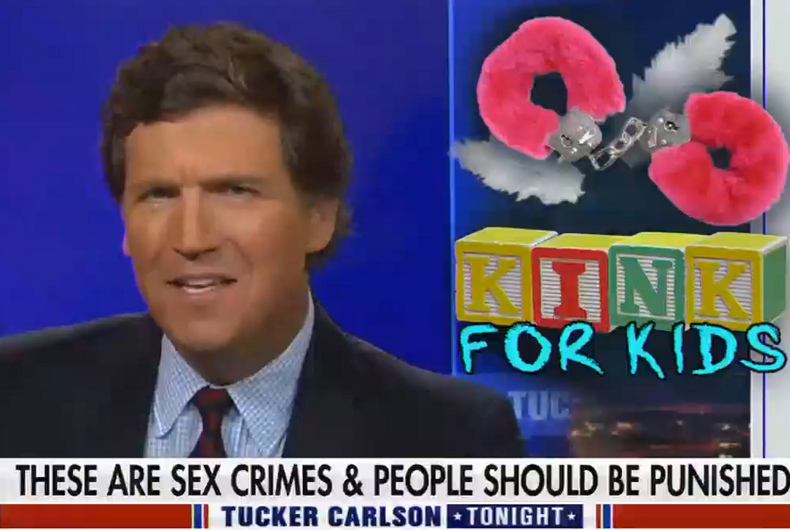 Fox News host Tucker Carlson called for violence against LGBTQ and supportive teachers on his show last night, saying that “neighborhood dads” should “mete out instant justice to anyone who even thought about sexualizing their kids.”

Carlson wasn’t exactly clear in what he was talking about. The segment opens with him talking about sex education in schools, which appeared to include even teaching about different kinds of families, but later in the segment he brought up anti-LGBTQ realtor Chaya Raichik, who goes by “Libs of TikTok” online. Raichik generally shares videos of LGBTQ teachers talking about non-sexual topics like coming out to their classes and pronouns, things that aren’t even sex education.

In another part of the segment, he discussed doctors who work with transgender children, claiming that they’re “castrating” kids, even though gender-affirming surgery is not performed on transgender minors.

He rolled all of these things together – along with child sex abuse – into the expression “sexualizing children” and said that they all had the same results, effectively saying that mentioning LGBTQ people in the presence of children has the same long-term effects that child sex abuse does.

“The reality of all this, behind the euphemism, is horrifying, it’s sexualizing children,” Carlson said sternly. “And they go completely hysterical when you point that out because it’s true. And the real question is, ‘Why is everyone else putting up with this?'”

“In a healthy country, with an intact social fabric, neighborhood dads would mete out instant justice to anyone who even thought about sexualizing their kids. And if you doubt that, go out and try it in Bulgaria or South Africa or the Solomon Islands. Good luck. Let us know how that ends, if you can still speak.”

“People won’t put up with it, because the instinct to protect your children is the deepest of all human instincts because it has to be. It has to be. But it has been all but eliminated in the West.”

He stressed that talking about LGBTQ people in school has nothing to do with LGBTQ equality.

“The battle for trans rights is long over,” he scoffed. “Trans people have rights. They can dress any way they like.” As he spoke, the chyron said, without any explanation, “TRANS PEOPLE ARE NOT OPPRESSED IN THIS COUNTRY.”

A graphic with pink fuzzy handcuffs and the words “KINK FOR KIDS” then appeared on the screen, even though he had not mentioned anything that was even vaguely connected to kink.

“These are weirdos getting creepy with other people’s kids!” Carlson said. “These are sex crimes. And the people committing them should be punished.”

Carlson claimed that no one can “say that out loud anywhere but on Fox News.”

“You can claim that the Earth is flat and no one gets exercised. But when you start saying things like ‘All lives matter’ or ‘Sexualizing my children is a crime and if you keep it up, I’m going to hurt you because I am the dad,’ say that? You’re done,” he said.

“We used to say, ‘Oh, our society doesn’t care about children,'” Carlson said. “What you’re seeing is a society that hates children. You would have to hate children in order to sexualize them. Because sexualizing children screws them up for life. Ask anyone to whom it has happened. Period.”