TinyMart is sharing this content, the original was posted on lgbtqnation.com by ﻿ Greg Owen Monday, August 29, 2022, So please click here to go there
.

The EuroPride celebration was to take place September 12-18. 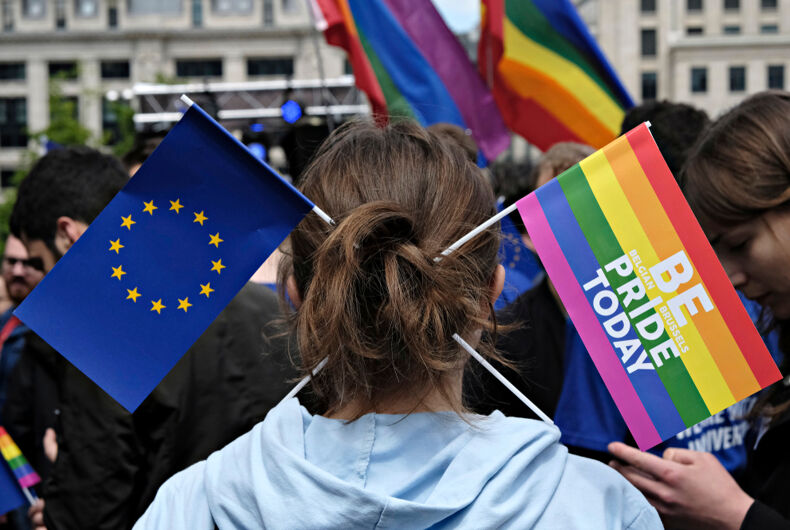 A young man sports rainbow and European Union flags in his hair during the Belgian Gay Pride parade in Brussels Belgium on May 20, 2017.Photo: Shutterstock

On Sunday in Belgrade, a massive rally took over the Serbian capital, protesting a pan-European Pride event — that had already been cancelled.

The march was led by the Serbian Orthodox Church and joined by a collection of right-wing hate groups and pro-Russian nationalists. Bishops warned the event was a threat to traditional family values, according to Reuters.

Protesters displayed crosses and other religious iconography while carrying anti-LGBTQ signs declaring “Save Our Children.”

The day before, the president of Serbia announced plans to cancel the long-planned EuroPride in the city, using the excuse that there’s just too much going on. Serbian President Aleksandar Vucic claimed the country is facing too many problems to handle the event.

The EuroPride celebration was to take place September 12-18.

While conceding the cancellation would be “a violation of minority rights,” Vucic said “at this moment the state is pressured by numerous problems,” citing economic woes, tensions with neighboring Kosovo, and threats from far-right extremists.

“President Vucic cannot cancel someone else’s event,” said Kristine Garina, president of the European Pride Organizers Association (EPOA), the event’s organizer. “The right to hold Pride has been ruled by the European Court of Human Rights to be a fundamental human right.”

Vucic made the announcement at a press conference where he also proposed extending the term of Prime Minister Ana Brnabic, a lesbian who’s been in office since 2017. EPOA’s Garina called on her to honor a pledge supporting the festival and reverse course.

Brnabic has been accused of not doing enough to advance the cause of LGBTQ rights in Serbia since assuming office.

Serbian Pride organizer Goran Miletic claimed Vucic didn’t have the authority to cancel the pan-European rally. “The only thing that can happen is for the police to ban the march,” Miletic said. “However, such a hypothetical decision would be contrary to the constitution.”

A police ban on the event would open the government up to lawsuits, Miletic said.

While the central European nation has taken steps to further LGBTQ equity while applying for European Union membership, the far-right in the country, inspired by pro-Russian nationalists, has balked. Violent attacks against the LGBTQ community are a common occurrence.

Since an attack in 2012, Pride in Belgrade has required a heavy police presence.

The president said: “It’s not the question of whether [extremists] are stronger, but you just can’t do it all at the same moment, and that’s it.”

“I am not happy about it, but we can’t manage,” Vucic said. He suggested Pride could be postponed for “happier times.”