TinyMart is sharing this content, the original was posted by 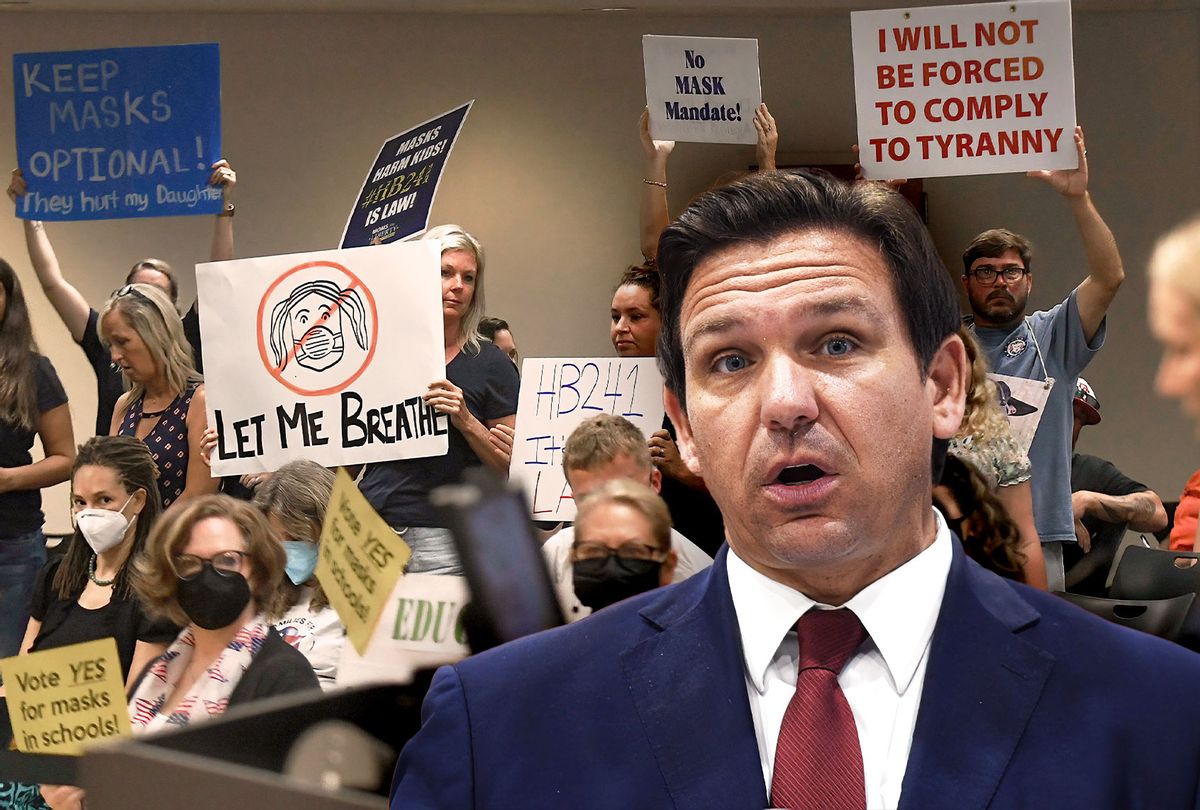 Ron DeSantis | People demonstrate with placards at an emergency meeting of the Brevard County, Florida School Board in Viera to discuss whether face masks in local schools should be mandatory. An executive order signed by Florida Governor Ron DeSantis banning mask mandates in schools was thrown out by a Florida judge on Friday. (Photo illustration by Salon/Getty Images)

Republicans widely view the "critical race theory" hoax as a crucial component to regaining the governorship of Virginia in 2021, so it's not a surprise that the party is rapidly expanding its national war on educators under the guise of "parental rights" in 2022. Now the book banning impulse that was initially focused on books about race and racism has dramatically expanded to stomp out any acknowledgement that LGBTQ people even exist. The most prominent of these efforts is the banally named "Parental Rights in Education" bill in Florida, which Republican Gov. Ron DeSantis is attempting to fast track.

Redubbed by opponents as the "Don't Say Gay" bill, which is certainly more accurate, one of the legislation's major provisions is a ban on "classroom discussion about sexual orientation or gender identity," as well as language clearly meant to force educators to report any kids suspected of being LGBTQ to their parents. Censoring any mention of LGBTQ people or outing kids to abusive parents is reason enough to oppose this bill. But, as hard as it may be to believe, there's an even more sinister agenda behind this bill and many others like it.

These bills are modeled on the backdoor mechanism that Republicans used to ban abortion in Texas, by creating a "bounty hunter" system that allows right wing busybodies to sue anyone who is suspected of providing or even just helping a patient get an abortion. And just as the lawsuit strategy helped the far-right achieve the dream of eliminating legal abortion in Texas, it could be used to achieve their even more secretive desire to end public schooling as we know it.

As Michael Daly of the Daily Beast points out, the "Don't Say Gay" bill gives parents a near-absolute right to sue a school into oblivion for neglecting to inform them of any "critical decisions affecting a student's mental, emotional, or physical well-being." The definition of "critical" is vague and likely all-encompassing. Democratic opponents, for instance, noted that schools could be sued for allowing kids to request vegetarian food. But really, the word "critical" is so expansive as to encompass anything. Don't like that your kid is reading poetry instead of playing sports? Don't like that your kid is doodling a disapproved crush's name in their notebook? Don't want your kid choosing to read "Beloved" by Toni Morrison instead of Ben Shapiro's rancid novel? Just claim the kid's "well-being" is affected and sue the school.

In Oklahoma, a similar bill that uses a bounty hunter system would allow parents to sue schools for supposedly promoting "positions in opposition to closely held religious beliefs of the student." Again, the language is distressingly vague. What constitutes "promoting positions" or a "closely held religious belief?" Certainly, any biology book that mentions evolution would be targeted, or health class that admits human sexuality is real. But we know that "parents rights" groups have also tried to ban books that acknowledge mythologies or religious beliefs that aren't Christianity — including books about Greek mythology. Could teachers could be targeted for explaining how the constellations were named? Or that the days of the week refer to Nordic mythology? Would school libraries be sued for stocking books like "Harry Potter" or "Lord of the Rings," which Christian groups oppose on the grounds that they "promote" witchcraft?

Those bills are two of the worst examples, but the strategy is spreading across the country.

Republican-controlled legislatures keep introducing bills that would encourage bounty hunting against schools for allowing kids to learn or even hear about anything not pre-approved by parents. These bills don't just create an atmosphere of intimidation, where teachers are afraid to teach anything — what if a parent says their religion forbids the teaching of algebra, in order to get their hands on the bounty money? As with the abortion "bounty hunter" law in Texas, these bills create an opportunity for right wingers to bankrupt schools through lawsuits, shutting them down permanently.

That sounds outrageous, but it's really not. It's been a long-standing dream in right-wing circles to end public education as we know it, and replace it with a system of private schools and homeschooling for those who can afford it and, for those who can't, no schooling at all. As Kathryn Joyce documented for Salon, the fig leaf of "parent's rights" has long been used as cover for what is a flat-out war on public education. And as Salon writer Jon Skolnik reported, the various "parents rights" groups that have cropped up in the news recently are funded by a shadowy network of far-right operatives that would love to see public education disappear altogether. As political scientist Maurice T. Cunningham, author of "Dark Money and the Politics of School Privatization," told Skolnik, the goal is "the destruction and ultimate privatization of America's public school system."

The problem with this goal — as with abortion bans — is that it's wildly unpopular with the public.

The right has long sought a backdoor way to defund schools and shut them down, all without engaging the public in a debate about it. They know it's a debate they would lose. Which is why the "bounty hunter" system that Texas is using to ban abortion has so much appeal. It allows states, under the guise of "parent's rights," to set up a system that would funnel huge sums of money out of schools and into the pockets of anti-education activists. They don't have to formally end public education through the legislature. They can just use this bounty hunter system to make it impossible for schools to function.

The right's hatred of public education isn't too hard to parse. They aren't just afraid that kids will learn forbidden knowledge — such as that Jim Crow happened or that LGBTQ people are real — in the classroom or the library. It's often the stuff outside of the classroom that is as much of a threat to conservative ideology. Kids meet different people and learn different ideas not just from teachers, but from each other. Even if you eradicate every book that mentions LGBTQ people, for instance, kids will learn anyway, from each other. Public education also makes it a lot harder for rich, white people to hoard all prestigious employment opportunities for themselves, by giving working class people and people of color a chance a pathway to the degrees needed to get those jobs.

But selling this censorious and classist agenda straightforwardly to the public won't fly. Instead, Republicans are constructing this back door, which will allow them to destroy schools through lawsuits, instead of simply defunding them in the legislatures. If these bills become law, there may be no limit on how much damage the right can do to public education through frivolous lawsuits based on asinine "parent's rights" claims.