The religious right is now targeting sexless marriages as “selfishness.” They want to ban those too

TinyMart is sharing this content, the original was posted on lgbtqnation.com by ﻿ Tyler Songbird Tuesday, October 25, 2022, So please click here to go there
.

It's not just same-sex marriages Republicans want to ban. Now they don't like asexual marriages either. 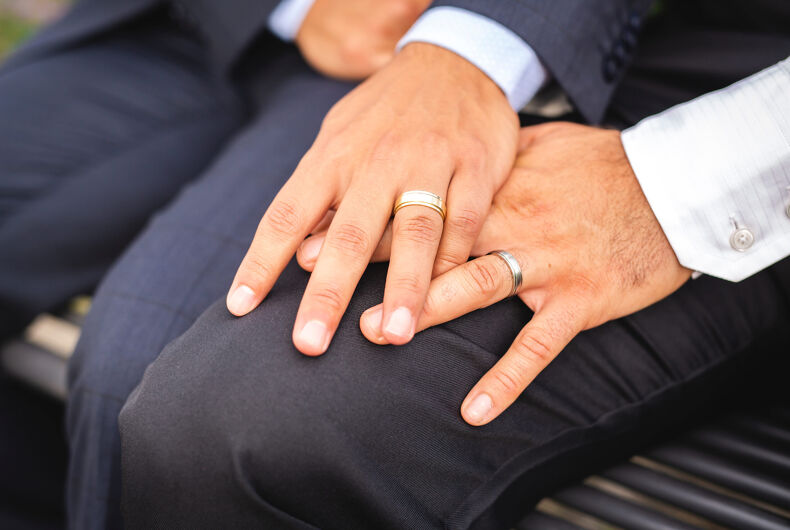 In July, the Supreme Court of Sweden ruled in a landmark case that a relationship doesn’t have to involve sex to be considered significant. In a case involving an asexual couple in which one of the two parties is deceased,  the court emphasized that a relationship should be characterized by a close community in personal terms that normally occurs between married people and that sex doesn’t have to be involved for that to happen. It was a significant win for asexual people in Sweden.

However, in America, a darker reality exists for asexuals even on this Ace Week, as religious nationalist groups are actively trying to block the Respect for Marriage Act from passing in the Senate. Not only is the religious right seeking to ban gay marriage once again, but they have also signaled a future attack against asexual marriages.

As obtained by Politico, some 83 Christian nationalist groups (led by the Alliance Defending Freedom) released a letter in July imploring  Senate Minority Leader Mitch McConnell (R-KY) to block the Respect for Marriage Act, because marriage equality somehow opens the door to further immorality, like platonic marriages.

“H.R. 8404 would require federal recognition of any one state’s definition of marriage without any parameters whatsoever. This would include plural marriages, time-bound marriages, open marriages, marriages involving a minor or relative, platonic marriages…”

It’s impossible to ignore calling out the perfidious groomer libel conservatives keep trying that is recycled garbage from the 1970s. However, we cannot ignore the religious right calling for platonic (asexual) marriages to be banned also!

There is an abundance of evidence to show asexual marriages are under threat, also.

The Ace Couple, an asexual married couple who runs a podcast discussing topics related to asexuality, did a four-episode series on the 83 religious groups who signed onto the letter to McConnell asking to block the Respect for Marriage Act.

Each group essentially states in no uncertain terms that asexuality is unacceptable to their religion and should be banned from having equal marriage rights.

The Witherspoon Institute, a right-wing think tank founded by Robert P. George (who founded the anti-LGBTQ hate group American Principles Project), came out with an op-ed entitled “Why We Should Push Back against Platonic Marriage.” The editorial’s author, Alan J. Hawkins, laments the idea of asexual marriages existing because he feels allowing asexual marriages will lead to a “marriage inferno.”

I think it matters deeply that we continue to define marriage as a sexual union. It matters because the continual pruning of marriage reduces its core purpose to something that does not really set it apart from other committed relationship possibilities. This ongoing thinning of marriage’s meaning leaves less and less of the concrete conjugal elements that can bind marriages together. Also, it seriously erodes the legal justification for the benefits, responsibilities, and protections with which the law endows marriage.

The Witherspoon Institute is not alone in this thinking.

No group stated this more than the Heritage Foundation, which wrote a 2016 article, “The Obligations of Family Life: A Response to Modern Liberalism,” in which they vocalized their hatred of autonomy and choosing not to have sex and procreate.

Autonomy has within itself the seeds of ever-greater radicalism because coercion can be given an ever-broader definition, beginning with physical coercion but ending with any external or natural consideration shaping one’s “choice.” Truly autonomous choices, on this ever more radical understanding, must be made without the influence of imposed habits, human reason, education, social pressure, legal pressure, cultural expectations, or any other external demand. Autonomous choices spring from within the individual, lest they be traceable to something oppressive or alien to the individual. One wonders, therefore, whether such choices are made in consideration of anything but selfishness.

The religious right views exercising freedom of choice as nothing more than being selfish. They view choosing individual happiness as somehow wicked and evil, and they want to remove the right to choose from us all, forcing us into sex on their terms.

It’s weird to me seeing the religious right come right out and attack sexless marriages.

Growing up in a purity culture right in the heart of the Bible Belt, all I heard as a youth were messages about abstaining from sex, with pastors and Christian leaders imperatively saying, “Don’t have sex! Don’t even think about it!”

Now, the commandment has apparently flipped, with the religious right commanding everyone to have sex.

The religious right states in no uncertain terms that anyone not entering into a sexual, procreative relationship should not be allowed to marry.

This has large ramifications on asexual people—many of whom desire companionship and love— as well as on asexual married couples who depend on the benefits marriage provides. The Respect for Marriage Act would be a vital help to asexual couples who now find themselves in the crosshairs of the culture wars.