The Fact-Free Logic of Samuel Alito

TinyMart is sharing this content, the original was posted on theintercept.com by Jordan Smith, May 4 2022, 5:30 p.m. So please click here to go there
. 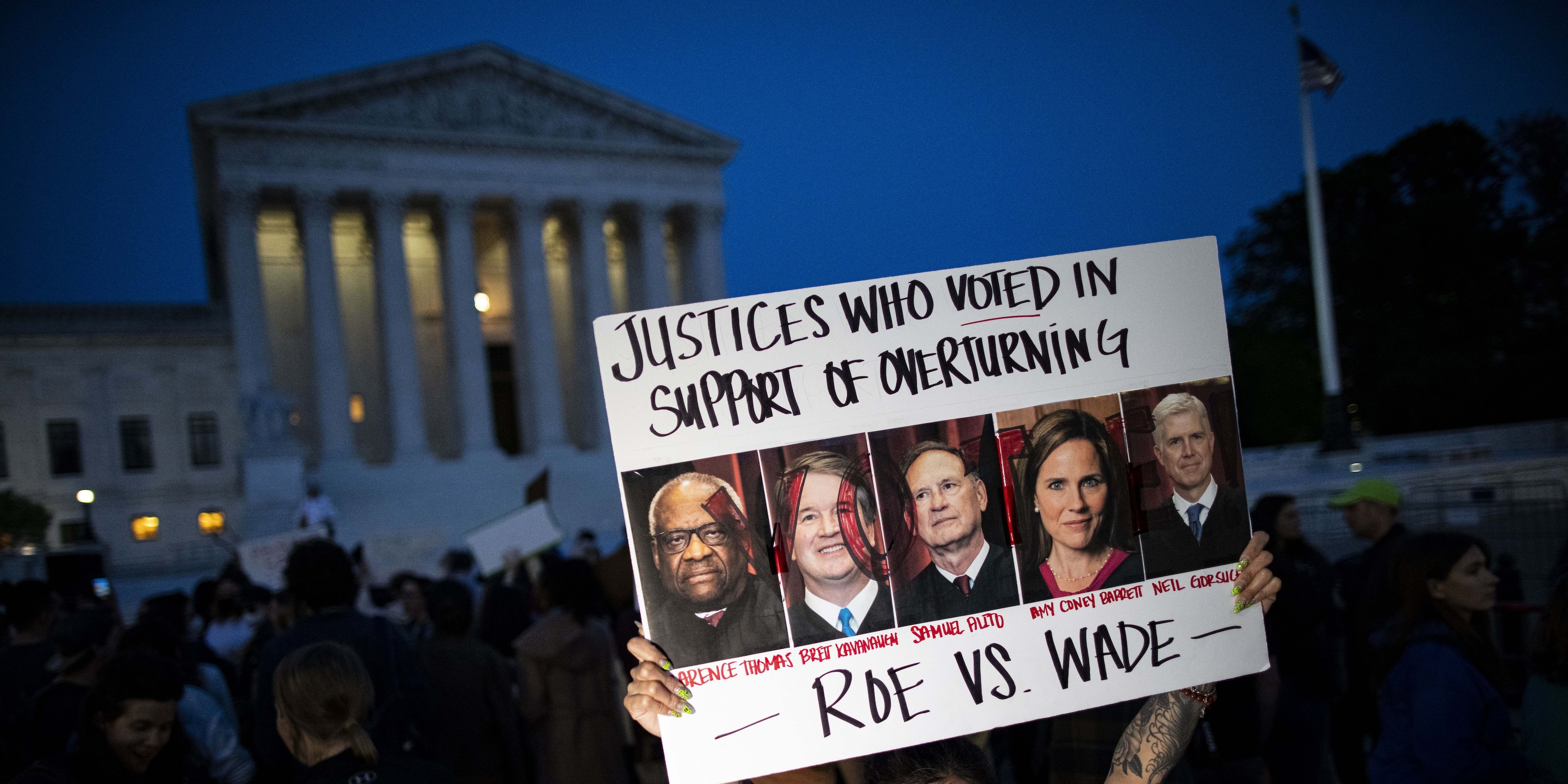 As a matter of fact, Supreme Court Justice Samuel Alito is wrong.

In a leaked draft of the court’s majority opinion in the Mississippi case Dobbs v. Jackson Women’s Health Organization, Alito writes that Roe v. Wade and its successor Planned Parenthood v. Casey must be overturned — an extraordinary move that would topple precedent in order to constrict, rather than expand, constitutional rights.

The missive is aggressive and self-righteous and reads like the greatest hits of those who disfavor the right to bodily autonomy. There’s the linking of abortion to eugenics, for example. “Some such supporters have been motivated by a desire to suppress the size of the African American population,” Alito writes. “It is beyond dispute that Roe has had that demographic effect.” The ahistorical comparison misses the fact that an individual choosing to abort their own pregnancy is not analogous to forced sterilization by the state to alter the American gene pool.

And there’s the claim that because the word “abortion” isn’t found in the Constitution, the right to it doesn’t exist. “The Constitution makes no reference to abortion, and no such right is implicitly protected by any constitutional provision,” Alito writes. This completely ignores the historical significance of the 14th Amendment, a Reconstruction-era addition meant to ensure individual liberty, including the right to decide whether and with whom to form a family. “Most Americans understand the plain truth reflected in these protections,” Elizabeth Wydra, president of the Constitutional Accountability Center, said in a statement. “A person cannot truly be free, and is not truly an equal member of society, if they do not get to decide for themselves this most basic question of bodily autonomy.” Alito’s opinion, she said, “frighteningly bulldozes past the Constitution.”

Alito also dismisses the notion that there are any clearly identifiable reliance issues at stake in discarding abortion rights. In this context, the concept of reliance posits that when expectations have been built around the stability of a particular law or judicial pronouncement, those interests should be protected and the precedent underpinning them upheld. In addressing the issue, Alito comes off as if perplexed: The court knows how to evaluate “concrete” reliance issues like those implicated in “property and contract rights,” Alito writes, but assessing an “intangible” reliance is a whole other story. “That form of reliance depends on an empirical question that is hard for anyone — and in particular, for a court — to assess, namely, the effect of the abortion right on society and in particular on the lives of women.”

Yet again, Alito is wrong — and there’s plenty of research to prove it.

A Mountain of Evidence

In an amicus brief filed in the Dobbs case, 154 economists and researchers took direct aim at the how-could-we-possibly-know-what-abortion-has-done-for-society nonsense. The brief details a substantial body of research demonstrating that access to legal abortion has had significant social and economic impacts, increasing education and job opportunities for women and reducing childhood poverty.

The expansion of abortion access after Roe reduced the overall birthrate by up to 11 percent. For teens, the drop was 34 percent; teen marriage was reduced 20 percent. Research has revealed that young women who used abortion to delay parenthood by just a year saw an 11 percent increase in hourly wages later in their careers. Access to abortion for young women increased the likelihood of finishing college by nearly 20 percentage points; the probability that they would go on to a professional career jumped by nearly 40 percentage points. All these effects, the economists noted, were even greater among Black women.

“Abortion legalization has shaped families and the circumstances into which children are born,” the economists wrote. Abortion legalization reduced the number of children living in poverty as well as the number of cases of child neglect and abuse. “Yet other studies have explored long-run downstream effects as the children of the Roe era grew into adulthood,” reads the brief. “One such study showed that as these children became adults, they had higher rates of college graduation, lower rates of single parenthood, and lower rates of welfare receipt.”

In other words, the effect of the abortion right on society is not remotely “intangible.” There is decades’ worth of evidence showing that abortion access has positively impacted women and their families. “But those changes are neither sufficient nor permanent: abortion access is still relevant and necessary to women’s equal and full participation in society,” the economists wrote, challenging Mississippi’s argument in the Dobbs case that contraception and employment policies like parental leave have essentially made abortion unnecessary. Indeed, nearly half of all pregnancies in the United States are unintended and nearly half of those pregnancies end in abortion. “These statistics alone lead to the inevitable (and obvious) conclusion that contraception and existing policies are not perfect substitutes for abortion access.”

I was a 19-year-old sophomore at the University of Maryland when I found out I was pregnant. I freaked out; I did not want to be pregnant. I knew I needed an abortion, but I didn’t have the money. I gathered up a bunch of change and called my mom from a pay phone. She didn’t miss a beat when I told her I was pregnant. “No, you’re not,” she said. She sent the money that day.

It was 1991, a year before Planned Parenthood v. Casey set the stage for the overwhelming number of restrictions on abortion access to come. Many were sold as a way to protect people’s health or a state’s interest in potential fetal life, but they were largely based on junk science. For me, once I had the money, the access was easy. I went on with my life, and I have never regretted my decision. Abortion was the reason I was able to stay in school, go on to graduate school, and develop my career.

Millions of Women Already Live in a Post-Roe America: A Journey Through the Anti-Abortion South

But while I had a relatively easy time exercising the right conferred by Roe, that is far from a universal experience. For many, Roe was always just a promise on paper. And for decades, those who disfavor reproductive freedom have worked diligently with their conservative elected allies to make abortion all but inaccessible for millions of people living in large swaths of the country. I’ve watched this happen over the nearly two decades that I’ve covered assaults on reproductive health access. The burden has fallen disproportionately on people of color, those with low incomes, those living in more rural areas of the country, young people, immigrants, and LGBTQ+ people. Doing away with Roe is only going to exacerbate those inequities. Thirty-six million people of reproductive age live in the 26 states that will outlaw abortion, or are likely to, once Roe falls. It is “unconscionable; it is unjust,” Alexis McGill Johnson, president and CEO of Planned Parenthood Federation of America, said on a Tuesday press call.

No court decision can stop abortion, “period, point blank,” she said. “People with resources will travel to get the care they need, they always have. Others will self-manage their abortions. And there will be people forced to carry pregnancy against their will.”

Fatima Goss Graves, president and CEO of the National Women’s Law Center, was blunt. “To say that we are in unprecedented and truly terrifying times would be a gross understatement,” she said on the call. Losing the right to abortion would mean we no longer have a Constitution that “recognizes our fundamental autonomy and equality.”

Indeed, Alito’s arguments in the draft opinion are deceptive and dangerous. And his regressive read of the law places other rights firmly in the crosshairs — including the right to contraception and to marriage equality. In his zeal to overturn Roe, Alito not only dismisses the decades of work toward realizing the ideal of equality, but also the very notion of equality itself. Certainly, he must be wrong about that.