Teachers are already getting fired, resigning & speaking out against Don’t Say Gay movement

TinyMart is sharing this content, the original was posted on lgbtqnation.com by  Daniel Villarreal Friday, May 20, 2022 So please click here to go there
.

"I’m tired. I’ve fought for so long for kids to feel human, to be safe, to have hope. I don’t know how much longer I can do it." 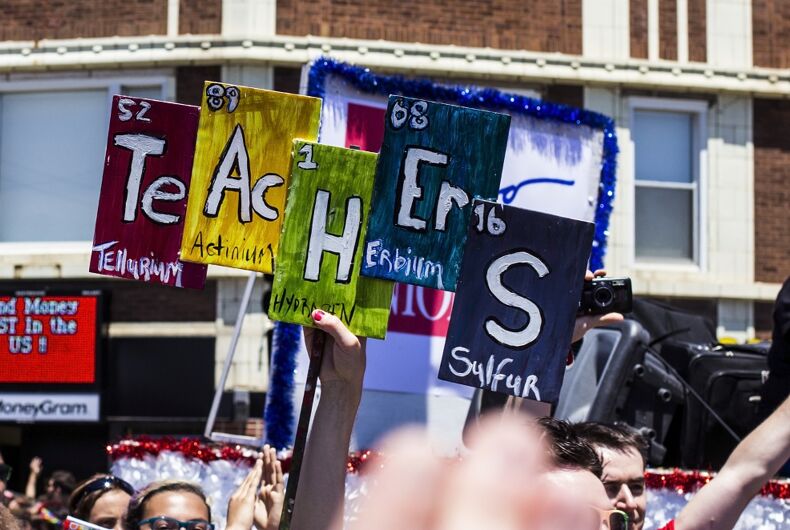 A gay teacher and a lesbian teacher are speaking out against the harassment and censorship they’ve faced as school boards and state legislatures ban LGBTQ and anti-racist content from classrooms.

The harassment, which is happening to teachers nationwide, has ousted some LGBTQ educators from schools and compelled others to stop teaching altogether.

Willie Carver — a gay French and English teacher at Montgomery County High School in Mount Sterling, Kentucky — told a U.S. House Subcommittee on Civil Rights and Civil Liberties hearing on Thursday that his school district’s administrators have instructed teachers to cover “nothing racial.” Administrators worry that parents will object to “critical race theory,” content educating students about the history of institutionalized racism, he said, according to the Lexington Herald Reader.

The subcommittee met to investigate the silencing and stigmatizing effects that classroom content bans have on teachers.

Students also use anti-LGBTQ and racist slurs without facing punishment, he added.

“I’ve always faced discrimination as a gay teacher and I’ve weathered the storm because my presence saves lives,” Carver told the subcommittee. “Hatred is politically protected now… but I will not ethically erase Black or queer voices.”

Carver recently won 2022 Kentucky Teacher of the Year and met Democratic President Joe Biden, but the school didn’t mention his achievement in an email to parents. In fact, schools are terminating gay teachers with perfect records, Carver said.

“I was born to teach and I’m good at it. I’ve always faced discrimination as a gay teacher and I’ve weathered the storm because my presence saves lives…. [Now,] I am made invisible,” Carver said. “Few LGBTQ teachers will survive this current storm, politicizing our existence has darkened schools. I’m tired. I’ve fought for so long for kids to feel human, to be safe, to have hope. I don’t know how much longer I can do it.”

Nicolette Solomon, a fourth-grade teacher in the Miami-Dade County public school district of Florida, told The Miami Herald that she resigned after repeatedly facing anti-LGBTQ discrimination from her colleagues for being married to a woman.

Even before Florida passed its “Don’t Say Gay” law banning LGBTQ discussions from kindergarten through third-grade classrooms, Solomon only ever mentioned her wife to a select handful of students: Those who had asked after discovering proof of her wife online and those who approached her to discuss their own queer identities.

Nevertheless, fellow teachers made discriminatory comments toward her from her very first week on the job. One told her, “I like you as a person, but I don’t support gay marriage.” Another told her that her marriage was a violation of God’s rules and the way that the world should be.

Solomon overheard another colleague say that she’d never vote for Solomon to receive a state Rookie Teacher of the Year award because she’s gay. Yet another warned her against advocating for a transgender student’s request for a gender-neutral bathroom.

“Let me give you a tip: Don’t talk about anything LGBT,” one school staff member advised her. “Don’t do it. Parents can get upset. Don’t do that.”

Among parents and students, Solomon quickly gained a reputation as a caring and capable educator who provided a welcoming space for all students. She placed a rainbow sticker on her classroom door to designate her role as a liaison of the School Allies for Equity program. One parent thanked her for all the care she had shown her daughter and for taking the time to answer the parent’s questions. Another student wrote, “Mrs. Solomon is special . . . very organizd and shes fun. . . . She does not emberes me like other teachers.”

However, Florida’s new law allows parents to sue teachers and school districts if a staff member talks about sexual orientation or gender identity, a law so vague that many fear that they can be sued if they so much as acknowledge their same-sex spouse or another student’s queer identity. Unable to cope with the added pressure, Solomon resigned and has pledged never to teach again.

The Miami-Dade school district said in a statement that it has policies “that expressly prohibit discrimination and harassment” and it has never required that “teachers in same-sex marriages refrain from mentioning or acknowledging their marriages in class.”

Despite this, the law encourages the school community to target queer teachers and allies as threats. Even the governor’s press secretary has said that anyone who opposes the law is a pedophile. The law has already had numerous chilling effects on Florida’s teachers and students.

A sixth-grade Orlando science teacher resigned in spring after parents complained about his acknowledgment of his same-sex marriage at school. A Cape Coral middle school art teacher was fired after revealing her sexual orientation to students. Another teacher was forced to take down their rainbow “COEXIST” flag, one that they had flown for years, after the law passed.

Jack Petocz, a 17-year-old senior in Palm Coast, was forbidden from running for class president because he organized a massive student walkout in protest of the law. A Seminole County school district threatened to censor one high school’s yearbook because it contained images of a similar protest, even though past yearbooks had covered other non-school sanctions protests in the past.