TinyMart is sharing this content, the original was posted on lgbtqnation.com by ﻿ John Russell Tuesday, October 18, 2022, So please click here to go there
.

The regime has engaged in a campaign of terror against the LGBTQ since retaking the country. 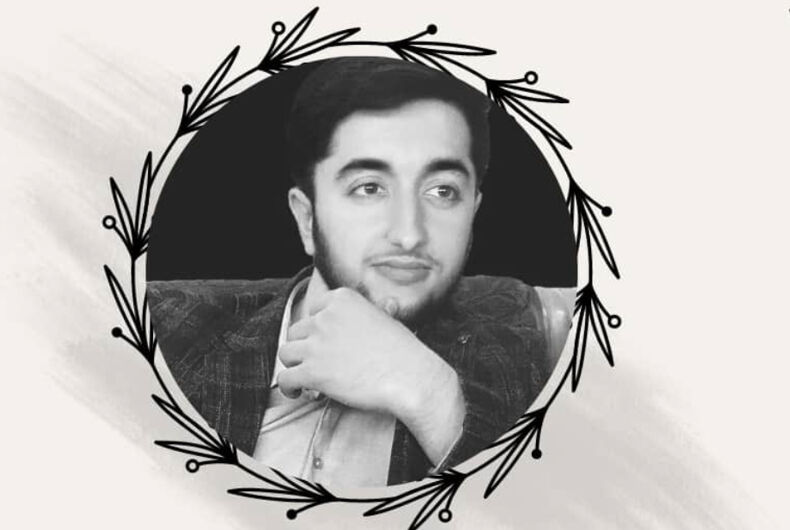 A gay Afghan man was abducted and murdered by Taliban gunmen in what was reportedly part of a brutal crackdown on the country’s LGBTQ community. A video of the killing was later sent to his family and partner.

Hamed Sabouri, a 22-year-old medical student, was kidnapped in August at a Taliban checkpoint in Kabul, according to his family and partner, Bahar. They told The Guardian that Sabouri was tortured for three days before being shot in the back of the head. After receiving a video of the killing, his family fled Afghanistan.

“We were like any other couple around the world in love but the Taliban treat us like criminals. They’ve killed the love of my life and I don’t know how I’ll live without him,” Bahar, who is now in hiding, told the U.K. newspaper. “I have been receiving threats from the Taliban again and I am now on the run. I have many friends from the LGBTQ+ community here in Afghanistan who have also been kidnapped and tortured. I was arrested by the Taliban in August 2021 and again in May and June this year and was raped, beaten, and tortured with electric shocks.”

“We fled from Afghanistan due to threats and murder of Hamed,” Sabouri’s brother Haseeb said. “We fled because the Taliban came to our home every day to harass and threaten us.”

“The biggest fear that every LGBTQ+ person in Afghanistan has right now is that they will become the next Hamed Sabouri,” Nemat Sadat, founder of LGBTQ rights group Roshaniya, said. “This has been their predicament ever since the Taliban returned to power.”

LGBTQ people in Afghanistan report being attacked, sexually assaulted, and threatened by members of the Taliban because of their sexual orientation or gender identity, according to a Human Rights Watch and OutRight Action International report released earlier this year. Even before the violently anti-LGBTQ regime retook the country in August 2021, a Taliban judged promised to reinstate Sharia law in Afghanistan, telling the German tabloid Bild that homosexuals would be punished by stoning or by having a wall fall on them.

Immediately following the Taliban takeover, human rights organizations in the U.S. urged the Biden administration to do more for LGBTQ Afghans seeking asylum. But Sadat told PinkNews that Sabouri’s murder was the result of western governments failing to take in Afghan refugees.

“The death of Hamed Sabouri is further proof that the Taliban will not stop until they eradicate all gay people from Afghanistan,” he said. “His execution was deliberate and outside of any legal framework. I don’t understand how people in good conscience around the world sit idle while the Taliban continue to rule with a total disregard for human life.”

Still, Sadat that LGBTQ Afghans would continue to fight the Taliban’s campaign of terror.

“The news of Hamed’s brutal death continues to put our community on edge but we won’t let Hamed’s life go in vain,” he said. “We will continue to fight for the rights of LGBTQ+ Afghans to escape execution and live a long, and happy life in a free country.”