TinyMart is sharing this content, the original was posted on lgbtqnation.com by ﻿ Alex Bollinger Monday, June 13, 2022  So please click here to go there
.

Each year the town burns a figure based on current events. This year they wanted to attack diversity and transgender rights. 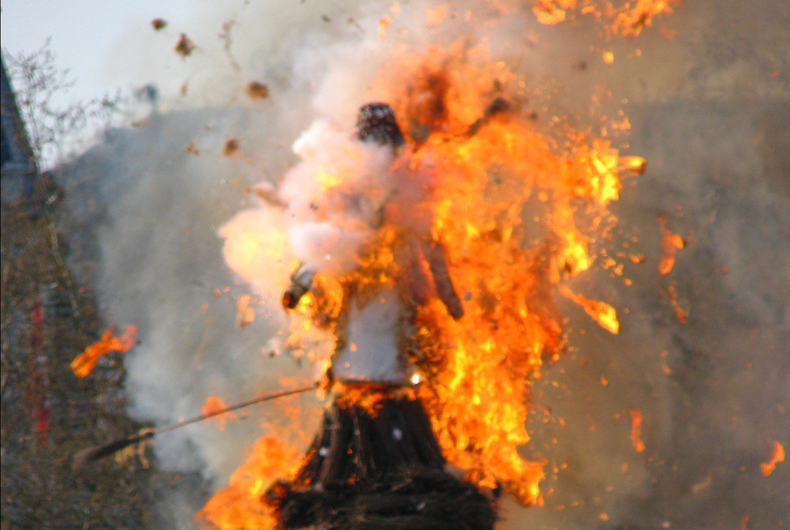 A straw trans woman was burned in effigy in a small town in Switzerland to celebrate the end of this past April that is now getting attention in German-language media.

The community of Bassersdorf – population 10,755 – has a yearly tradition of constructing large dolls – or “Böögg” – and then burning them for Sechseläuten, the celebration of the beginning of spring in April.

Related: Coca-Cola bought the covers of Switzerland’s newspapers for a pro-equality message

A Böögg is often a snowman figure, meant to represent the concept of winter and the point of burning it is to burn winter in effigy at the start of spring.

But Bassersdorf is usually a bit more creative. The figures there usually represent people who are perceived as negative, and some choices in the past have been North Korean dictator Kim Jong-Un and Libyan dictator Muammar al-Gaddafi.

This year, the figure was a person with a rainbow skirt, red tie, a penis, and breasts who was named “Diversity Böögg.” The figure also had long blond hair and make-up on one side and was balding with dark, curly hair on the other, according to Queer.de.

Master of ceremonies Christian Weiss told Zuri Today that people came to see the figure get burned but didn’t know what they were looking at until the wind blew the skirt up and revealed the penis.

“On Facebook, you can now choose the gender from a wide range of options,” said Weiss. “It was the same with the Böögg this year. It has different features and there is something for everyone.”

He said that he didn’t know what article to use (the definite article “the” in German can be gendered) so they chose the word “Diversity.” Weiss also said that while they wanted to make the Böögg reflect current events, they thought that anything related to COVID-19 or Ukraine would be too sad, and it would be “happy and fun” to burn a trans woman instead.

The paper Tagesanzeiger reported that most people liked the trans woman burned in effigy.

An 82-year-old man, though, didn’t agree and filed a criminal complaint. He said that the ceremony was “inhuman” and accused the organizers of anti-transgender discrimination and stigmatizing a persecuted minority.

Weiss responded that people are reading too much into the Böögg, saying that it wasn’t intended as an attack on anyone. He also said that it’s an argument “against rampant narcissistic hypersensitivity and the pathological lack of humor.”

Mayor Doris Meier said that she was sorry “if people’s feelings were hurt” and that “the action triggered different opinions on this sensitive topic.”

“I am convinced that those responsible did not want to offend anyone but wanted to draw attention to the topic of diversity,” she said.

The local prosecutor has not pressed charges based on the criminal complaint that the 82-year-old filed.

In 2020, the town of Imotski, Croatia burned two figures that represented a famous gay male couple during carnival.