TinyMart is sharing this content, the original was posted on timesofisrael.com by HASHEM OSSEIRAN, Jul.07.22, So please click here to go there
.

Interior Ministry instructs security forces to clamp down on events ‘promoting sexual perversion’; community lost many of its spaces in Beirut port explosion 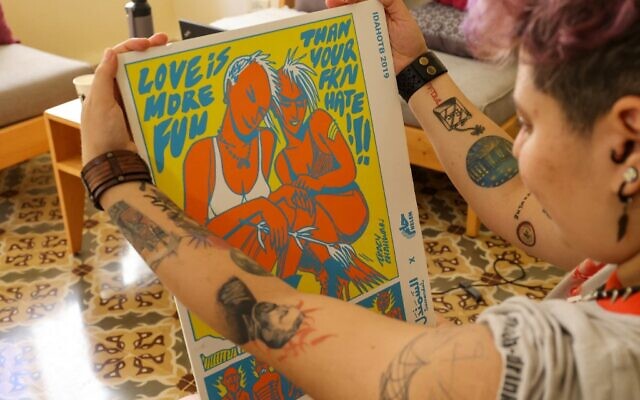 BEIRUT, Lebanon (AFP) — Lebanon’s LGBTQ community, long among the most vocal and visible in the Middle East, has been targeted by a crackdown that has seen queer activists harassed and Pride gatherings canceled.

It has heaped pressure on a community that already lost many of its safe spaces in the devastating 2020 Beirut port explosion and has been depleted by an exodus driven by Lebanon’s severe economic crisis.

An icy chill went through the crisis-tested community when the interior ministry, in a June 24 letter, instructed security forces to clamp down on events “promoting sexual perversion.”

“It feels very intimidating and quite scary to be a queer person in Lebanon right now,” said Tarek Zeidan, head of the Beirut-based Helem association, considered the preeminent Arab group defending LGBTQ rights.

“We are afraid these signals are only the beginning of further attempts to restrict the individual, civil and political rights of LGBTQ people.”

Lebanon has never been a safe haven for lesbian, gay, bisexual, transgender and queer people. But the community has long been visible and outspoken, defying arbitrary crackdowns on its bars, nightclubs and community centers.

Annual efforts to host LGBTQ gatherings have regularly been banned or canceled over threats.

But the state’s latest directive — condemned by human rights groups as unlawful — deepens the multilayered crisis that members say now threatens the very survival of the community.

The ministry argued that LGBTQ events violate customs, traditions and “principles of religion” in Lebanon, where political power is split along faith lines between Shiite and Sunni Muslim, Christian, Druze and other groups.

Lebanon’s LGBTQ community in 2018 scored a success when a court ruled that same-sex conduct is not unlawful, but since then it has seen more setbacks than victories.

The Beirut port blast heavily impacted an inner-city district with many gay-friendly spaces, also destroying the Helem offices which have only recently reopened.

LGBTQ people have also featured disproportionately in Lebanon’s snowballing population exodus that is generating an epidemic of queer isolation.

The minority “has suffered greatly over the past three years and is already made hyper-vulnerable by the socioeconomic discrimination it has been facing,” said Zeidan, 38.

The state move triggered an avalanche of homophobic slurs and threats from politicians, religious authorities and radical activists, as security forces banned even private workshops and movie screenings.

Anti-queer protesters demanded the criminalization of the LGBTQ status, and conferences discussed “risks and treatments” for homosexuality.

Rasha Younes of Human Rights Watch called it “definitely the most general ban we have seen in recent years,” adding that it lacked any legal framework and set “a dangerous precedent.”

Activists now report receiving phone calls from state security officers “inviting them for a chat over coffee and making it clear that they are monitoring their social media accounts,” Younes said.

Last week, LGBTQ activists planned a sit-in protest outside the interior ministry, but they called it off after receiving death threats.

The ministry’s decision came after a Christian group calling itself the “Soldiers of God” live-streamed a video of its members tearing apart a Beirut billboard featuring blooming flowers in the colors of a rainbow flag.

Marked #LoveAlwaysBlooms, the billboard had been created by Beirut Pride, a collaborative platform that was founded in 2017 to advocate for the decriminalization of the LGBTQ status.

Hadi Damien, its 33-year-old initiator, said the billboard had been their first major offline project since October 2019.

The angry backlash is not new, he said, sitting in a Beirut café, but he argued that it is all the more intense at a time Lebanon is gripped by a broader crisis and has seen the near-total collapse of the state.

“When institutions are weakened, we go to a very primitive way of governing people,” he said. “It means abuse of power is rampant, it means that any person can pretend to be law enforcement and crack down on a venue.”

Damien argued that the state’s latest move amounts to a “pure diversion” from Lebanon’s grinding malaise and “is nothing but performative politics.”

“When so much is going on, you need to show that you are doing something. So you always hit the people who seem like the easiest target.”