TinyMart is sharing this content, the original was posted on lgbtqnation.com by ﻿ Alex Bollinger Sunday, September 25, 2022, So please click here to go there
.

School board candidate Craig Ladyman said he wants people to "do their research into this flag" because it's related to "communist ideology." 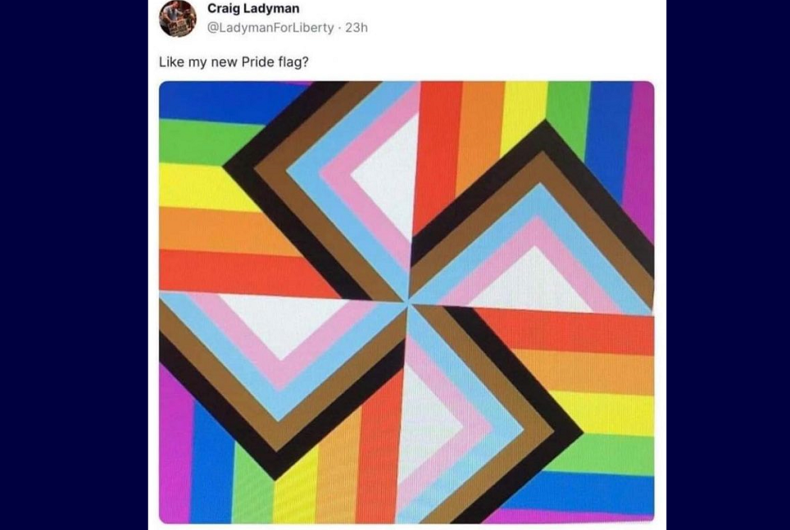 A rightwing school board candidate in Michigan is getting attention for turning the Progress Pride flag into a Nazi symbol.

“Like my new Pride flag?” Craig Ladyman, who is running for school board in Rockford, Michigan, posted on Donald Trump’s Twitter clone Truth Social. He posted an image of four Progress Pride flags arranged so that the sky blue, brown, and black stripes form a swastika. 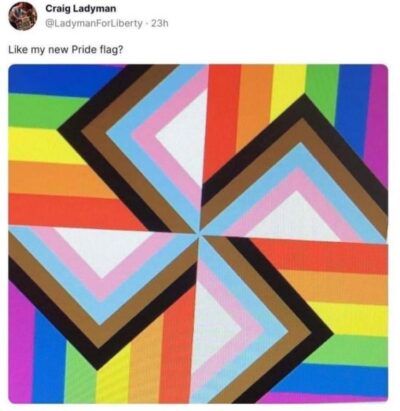 The image was criticized by Jewish people and LGBTQ people.

“It cheapens the Holocaust,” Rabbi David Krishef of the Ahavas Israel congregation in Grand Rapids told Fox 17. “It cheapens the suffering that their families went through.”

In a statement, Ladyman said that he didn’t create the image but he wanted to share it so that people would “do their research into this flag.”

He called the LGBTQ rights movement a “Trojan horse.”

“This movement is hostile towards gay people, it doesn’t even acknowledge the existence of women, it encourages and promotes the mutilation of children and experimentation on children,” he said the creator of the image told him. “It hates free speech! It will ruin your job and it will remove you from your job if you don’t bow down and worship to it.”

He also said that the flag is “a Trojan horse to bring in this woke ideology, this communist ideology, that is taking over every one of our national institutions.”

This isn’t the first time he has made anti-LGBTQ statements.

A fundraising website for his campaign cites his opposition to LGBTQ students using dog whistles. His campaign slogan on the site is “Vote Ladyman: He knows what a woman is!” which is an expression used on the right to say that transgender women aren’t women but transgender men are.

Other social media posts from Ladyman that the LA Blade found show his longstanding opposition to LGBTQ rights.

“I like exercising my Liberty like a drag queen exercises their sexuality,” he wrote with a picture of himself holding a rifle in front of a state government building. The idea that drag queens are performing sex acts just by putting on wigs and performing lip syncs to top 40 pop songs is another article of faith among anti-LGBTQ activists.

In an August social media post, he promised to ban “sexual grooming” in schools. “Grooming” refers to a set of acts that child sex abusers use to gain their victims’ trust and keep victims from telling others about the abuse.

Over the past year, the right has started using it to refer to any discussion of LGBTQ people in the presence of children, arguing that children learning that a classmate has two dads or two moms is akin to child sex abuse.