TinyMart is sharing this content, the original was posted on lgbtqnation.com by ﻿ Daniel Villarreal Tuesday, September 27, 2022, So please click here to go there
.

He said that rape victims aren't pretty enough to be believed. 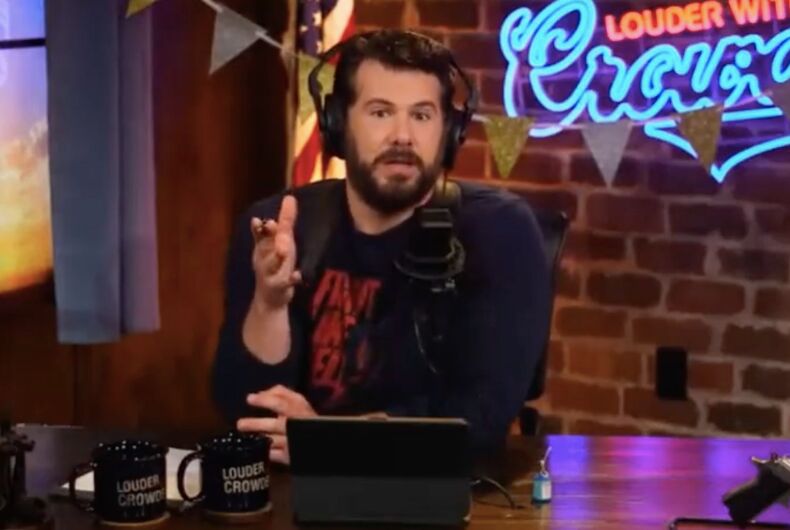 Right-wing anti-LGBTQ vlogger Steven Crowder, host of the web show Louder with Crowder, showed that he has no understanding whatsoever of rape after claiming that “not one Victoria’s Secret model has been raped.”

In a recent installment of his show, Crowder said that he expected that women targeted for rape would “be those who are most desirable sexually.” He said this after stating that he is against rape.

“Like, you don’t go carjacking a 98′ Oldsmobile,” he said, comparing women to cars.

Crowder said that this proves that rape victims are lying.

“It’s always a blue-haired would-be lesbian feminist who claim they’re raped,” he said. “As far as I know, not one Victoria’s Secret model has been raped…. And it’s always a rape that’s completely unverifiable.”

First, an estimated one out of six women in the U.S. has been the victim of an attempted or completed rape, according to the Rape Abuse & Incest National Network (RAINN). That means that approximately 27,905,500 women in the U.S. are survivors of rape — nearly the entire population of Texas. Presumably, all of these women are not the “blue-haired would-be lesbian feminists” that Crowder imagines.

Second, despite Crowder’s ignorance, Victoria’s Secret models have been victims of sexual assault.

In February 2020, a New York Times exposé revealed that Victoria’s Secret models were subject to “rampant misogyny, bullying, sexual harassment, and retaliation.” The exposé noted that the now-deceased accused child sex trafficker Jeffrey Epstein — who had ties to Leslie Wexner, the founder and CEO of Victoria’s Secret’s parent company — reportedly posed as a Victoria’s Secret recruiter to assault young women.

In July 2021, a former Victoria’s Secret model named Bridget Malcolm said that she was sexually assaulted while working as a model.

Third, there are many reasons that rapes are often “completely unverifiable,” as Crowder says, and it’s not because the women are lying.

Few rapes are ever definitely proven in police investigations or legal trials. Some accusers withdraw their allegations, fearful of retaliation, social shaming, or the emotional stress of undergoing a possibly prolonged trial. It can take over a year for a rape case to make its way through court. Many survivors are blamed for their own rapes due to their dress or behavior. Some are also counter-sued by their alleged assailants.

These fears may also make some women wait several weeks before reporting their rapes to the police. During this delay, vital evidence from witnesses, clues on the survivor’s body, and details from the rape scenes themselves can be lost.

Even if police find DNA evidence of sexual intercourse, it can also be very difficult for prosecutors to prove beyond a reasonable doubt that an accused rapist used force to inflict non-consensual sex on a woman, especially since fewer than 12 percent of rapes leave injuries, according to a study of rapes in Texas.

A 2010 U.S. study found that only two to 10 percent of rape accusations were proven to be fake. Only five out of 1,000 accused rapists end up going to prison in the U.S., according to RAIIN.

Of course, Crowder has made offensive anti-LGBTQ claims on his show before. In fact, it’s part of his brand.

In April 2022, Crowder claimed that “biological men” were “beating the hell out of women in their own sports.” His claim is overstated and untrue. Trans women aren’t dominating women’s sports. While a few have beat out cisgender female competitors, this remains rare.

In 2019, YouTube said it would allow Crowder to remain on its video-sharing platform despite videos in which he mocked gay Latino journalist Carlos Maza as a “lispy sprite,” “an angry little queer” and the “gay Latino from Vox.” Crowder also said that Maza eats a lot of d**ks and imitated Maza as having a high-pitched voice.

In a now-viral tweet posted on May 30, 2019, Maza brought attention to the fact that Crowder’s videos inspire his fans to flood Maza’s phone and social media inbox with hateful, threatening messages.

Afterward, YouTube promised to look into it. But after finding no instances of Crowder actually directing his viewers to harass Maza, YouTube said that it would allow Crowder to continue to operate with impunity, though it would continue to investigate his channel for other possible issues.

Later on, YouTube finally said it would demonetize Crowder’s channel for “continued egregious actions that have harmed the broader community,” adding, “To be reinstated, he will need to address all of the issues with his channel.”

The company’s response left some critics feeling like it had only addressed this particular issue because Maza’s criticisms of the platform went viral, not due to an actual change in its inconsistent enforcement practices.