TinyMart is sharing this content, the original was posted on lgbtqnation.com by  Alex Bollinger Monday, May 23, 2022 So please click here to go there
.

As the Supreme Court is expected to end reproductive freedom, Republicans want to make sure everyone knows that women's rights don't include abortion. But it does include their "right" to be locked up in the right prison. 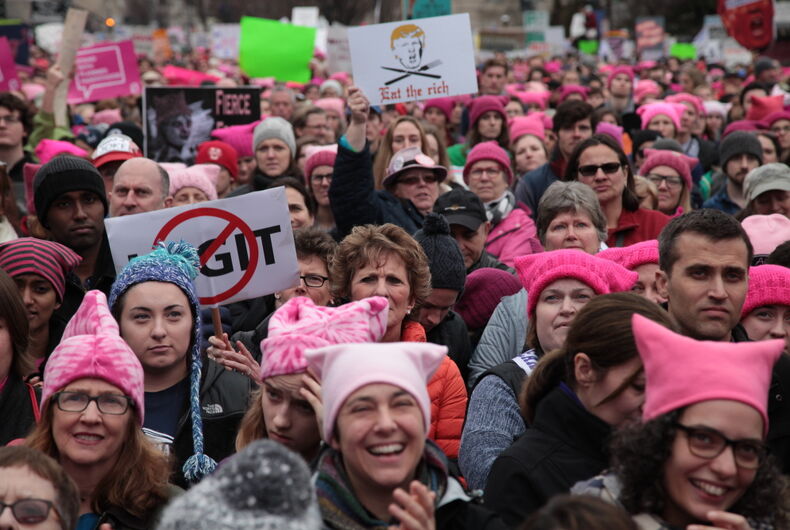 Congressional Republicans have introduced a resolution creating a “Women’s Bill of Rights” that mentions just one right, but only for cis women: the right to not see trans women in a public restroom. The rest of the Women’s Bill of Rights is about definitions and the government’s powers.

“The Democrats are erasing women and the spaces that are uniquely ours,” Rep. Debbie Lesko (R-AZ), who is trying to get the resolution passed in the House. Despite leading Republicans on the Women’s Bill of Rights, she has been endorsed by Arizona Right to Life and the Susan B. Anthony List because of her staunch opposition to reproductive freedom.

Related: GOP lawmaker has meltdown in public & screams at voters

The House version of the resolution has 11 co-sponsors and the Senate version was introduced by Sens. Cindy Hyde-Smith (R-MO), Ted Cruz (R-TX), and Cynthia Lummis (R-WY), who just got booed last week for mocking transgender people at a commencement speech and then lied about what she said, getting booed even more.

The Republicans say that their resolution, called the Women’s Bill of Rights, even though it does not include important rights women have fought for decades to obtain, like reproductive freedom, equal education, anti-discrimination protections, or the vote.

The resolution lists six points that it affirms. The first three are definitions. The fourth is about the right of cis women to not see trans women in certain spaces. And the last two are about the government’s actions, not women’s rights.

The resolution’s first point says, “for purposes of Federal law, a person’s ‘sex’ means his or her biological sex (either male or female) at birth,” without saying exactly how that should be determined. While several physical aspects of people’s bodies are associated with gender, like chromosomes, genitalia, and hormone levels, they don’t necessarily align and have often been used to tell some women – especially women of color – that they’re not really women.

The second and third points add more gendered terms and say that they too are defined according to “biological sex.” They do not mention any rights.

The resolution moves on to more substantive matters, saying that “there are important reasons to distinguish between the sexes with respect to athletics, prisons, domestic violence shelters, restrooms, and other areas” in its fourth point. Forcing trans women to be sheltered with cis men in many of those situations, though, has led to violence against trans women.

The fifth point gives the government the right to “distinguish between the sexes,” which isn’t at all a right for women.

The sixth point is about data collection, saying that federal, state, and local governments “are required to base such data on the biological sex of individuals at birth,” which, depending on what the data is about, could lead to inaccuracies in order to advance the Republicans’ political agenda.

All told, the Women’s Bill of Rights only protects one right for women: the right to be in a women’s prison (or shelter, etc.) with trans men but without trans women.

Several weeks ago, a leaked Supreme court decision several weeks ago in Dobbs v. Jackson Women’s Health Organization – which could overturn Roe v. Wadeand end the federal right to an abortion in the U.S. – made abortion one of the most talked about issues in the U.S., so it’s hard to see how Republicans could have simply forgotten to include it in their Women’s Bill of Rights.

The Convention on the Elimination of all Forms of Discrimination Against Women (CEDAW) is an international treaty adopted by the U.N. that is often described as an international women’s bill of rights. It includes 30 articles describing rights that member states agree to protect for women, ranging from taking measures to end human trafficking to citizenship rights to ensuring that women can freely choose a spouse.

While the U.S. signed the CEDAW, it’s the only country that signed it without implementing it. The Republicans backing the Women’s Bill of Rights could have looked to that landmark treaty for guidance but apparently, their motives were not to actually improve women’s lives.

“The radical Left has launched an attack on biology because they want to put themselves above God and they want to brainwash our daughters with their woke-ism,” said Rep. Mary Miller (R-IL), another Congressmember leading the resolution.

“The Republican resolution is another in a long line of cynical attempts by anti-LGBTQ extremists around the country to erase transgender and nonbinary people from our communities,” said Olivia Hunt of the National Center for Transgender Equality. “More than a century of science has shown us that biology is far more complicated than what the authors of this resolution describe, and that trans and nonbinary people’s genders are just as real and just as valid as everyone else’s. Science simply doesn’t support this attempt at making our existence a ‘culture war.’”