TinyMart is sharing this content, the original was posted on salon.com by Amanda Marcotte, Published June 7, 2022 1:34PM (EDT), So please click here to go there
.

From hiring "ex-gay" Milo Yiannopoulos to demanding genital inspections of kids, the GOP takes the hate next level 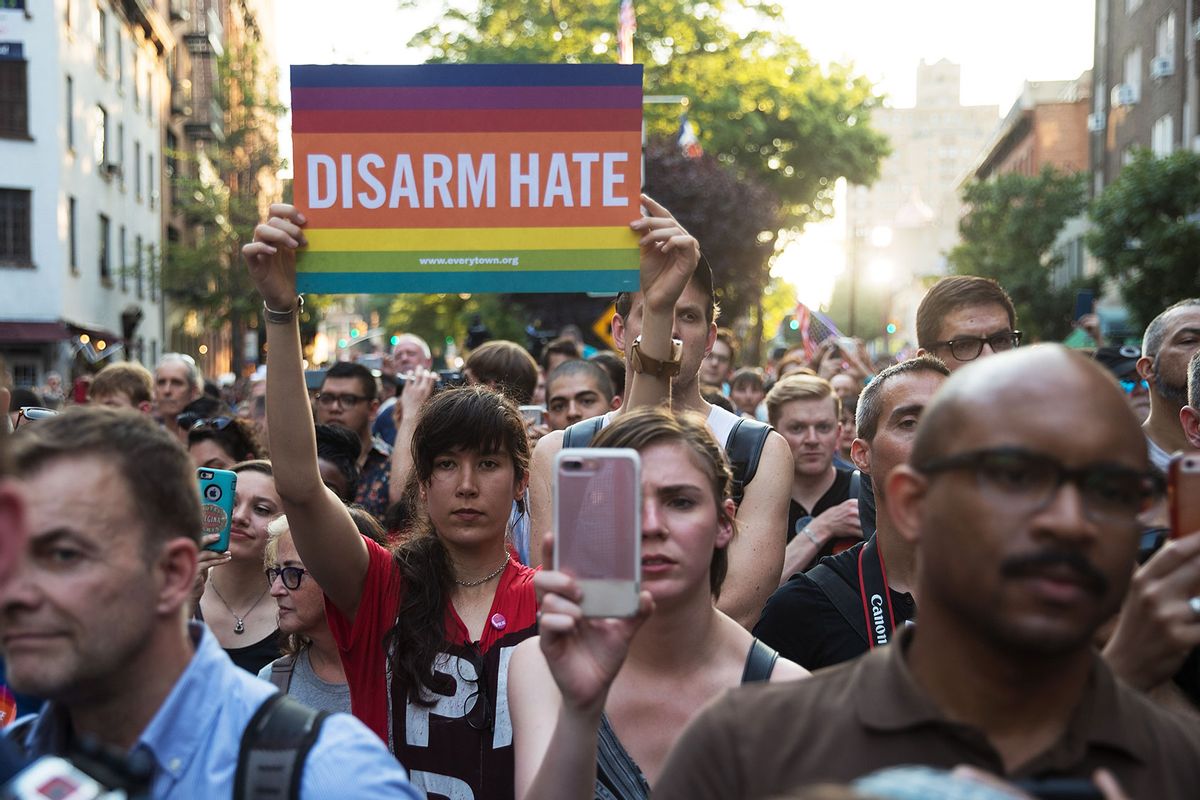 Nowadays, the month of June is notable to most Americans not just for the hot weather, swimming pools, and explosion of summer produce, but also for the cheerful displays of rainbows everywhere to honor Pride. While there's plenty of criticism to be had about the corporate-ization of Pride, what is also true is that, for right-wing bigots who still refuse to accept LGBTQ identities, the ubiquitous, normalizing presence of the rainbow flag during this month chaps their hides. Unfortunately, that means right-wing propagandists and Republicans see an opportunity to use Pride month to pander directly to the worst people in our society, turning up the trolling and harassment of LGBTQ people during a moment of celebration.

On Monday, the biggest Republican troll in Congress, Rep. Marjorie Taylor Greene of Georgia, announced a right-wing grifter team-up with Milo Yiannopoulos, who she is hiring as an "intern," even though he is a married, nearly middle-aged man who hasn't attended college in over a decade. Yiannopoulos was doing fairly well for himself a few years ago by being a full-time troll until a video resurfaced in 2017 of the right-wing provocateur praising a Catholic priest for molesting him as a boy. He then spent years struggling after losing the right's financial support. He eventually caved and rebranded himself as an "ex-gay" and a champion of a fascist form of Catholicism.

As Kathryn Joyce reports for Salon, the alliance between Greene and Yiannopoulos is largely built on their shared interest in Christian nationalism. The timing, however, is notable. The announcement was pegged to Pride month and is clearly about trolling the gay rights movement by promoting the right-wing myth that gay people can be "converted" to straight people. Indeed, Taylor Greene leaned directly into this narrative by releasing a statement about how Yiannopoulos "was" gay but "changed his life" through "Jesus and Church."

RELATED: Marjorie Taylor Greene and Milo Yiannopoulos: A match made in troll heaven

One should be skeptical of all this, of course, and not just because Yiannopoulos still appears to be married to a man, glibly telling reporters that his husband has been "demoted to a roommate." Yiannopoulos has a long history of cynical and insincere stunts to promote both himself and to drape his fascist views in a pseudo-irony that allows him to recruit followers while not being taken too seriously by the press. Greene, as well, plays stupid for the cameras but is likely a fairly savvy operator who knows how to use her "dumb blonde" persona to get liberals to spread her noxious ideas.

While a lot of the trolling from these two is likely fake, what is not fake is the hate they're spreading.

Greene's trolling hire of Yiannopoulos is just the most ridiculous example of what is shaping up to be a deeply ugly month of Republicans leeching onto the publicity of Pride month to spread lies, stoke homophobia, and target LGBTQ people for harassment and violence.

As Melissa Gira Grant writes in the New Republic, Republicans in state legislatures are making alliances with groups that have been "threatening to confront Pride celebrations with armed protest or 'hunting' LGBTQ people and allies." Aided by prominent figures like Republican Gov. Ron DeSantis of Florida, the right has been hyping false accusations that LGBTQ people are "grooming" children to be sexually molested as part of a national conspiracy that supposedly involves the Democratic Party, as well as corporations like Disney and the company that makes Oreo cookies. This risible rhetoric is clearly meant to encourage violence, and it's working. As Grant reports, trolls are threatening to harass Pride parades and are filming themselves attacking LGBTQ-friendly churches.

This has all been aided by the infamous "Libs of Tik Tok" Twitter feed, which has been releasing a steady stream of viral posts meant to push a conspiracy theory that "liberal elites" are trying to "turn" kids trans or queer through Pride events. Photos of children at Pride events or stories of kids playing dress-up are dangled out as "proof" of this conspiracy theory. Even though little boys and girls play dress-up for the same reasons — it's fun! — the lurid accusations are giving anti-queer bigots the pretext they need to harass and abuse families for daring to attend Pride events.

Over the weekend, the seriousness of the situation was illustrated in Dallas, when anti-LGBTQ protesters intimidated attendees at a family-friendly drag show to raise funds for queer youth. The organizers let news cameras inside, where the event appeared exactly as advertised: a cleaned-up version of their usual drag show, stripped of sexual innuendo so that the kids can enjoy it.

The event is basically a queer version of those Kidz Bop records, but the protesters held signs falsely accusing LGBTQ  people and their allies of "grooming" children. The people in the crowd said that they were there to "protect" children, but their behavior says otherwise. Video from the protest shows the queer-phobes being aggressive, chasing families, and chanting incendiary language about sexual abuse that is far more threatening to children's safety than watching a drag queen perform a fully clothed dance.

They have dramatically escalated efforts to define queer people as threats to society, and especially to children.

This grotesque and threatening display, however, was met by approval by GOP politicians. One Republican state legislator, Bryan Slaton, claims he'll be introducing a bill banning kids from drag shows and "other inappropriate displays." The word "inappropriate" is doing a lot of work there. One can easily see such a law being used to criminally punish queer couples for holding hands in front of children. And same-sex couples who have children are in very real danger of having their entire home deemed "inappropriate." After all, bills in other states, especially Florida, have already used this "groomer" panic to pass broad legislation meant to force adults to conceal the existence of LGBTQ people from children altogether.

Sadly, as Florida's "don't say gay" law shows, this over-the-top homophobia is not fringe in the GOP any longer. Republican state legislators have spent months trying to cram through hundreds of bills meant to terrorize LGBTQ people, targeting trans kids in particular. And despite their claims to be "protecting" children, many of these bills are overtly cruel to children.

For instance, Republicans in the Ohio state legislature have introduced a bill that would allow any person — a parent, a teacher, a coach of a rival team, a random member of the community — the right to "challenge" the gender identity of any kid who plays on a girls sports team. If a girl's gender is challenged, she is required to go through a process that the Salem witch hunters would deem excessive: A blood draw to determine both genetic make-up and hormone levels and a physical exam by a doctor to verify "internal and external reproductive anatomy."

For those who don't have the relevant parts, let me explain: That means a doctor shoves fingers in your vagina and thumps your tummy to feel your uterus. It's unpleasant for adults, but Ohio wishes to inflict this on children at the request of any random person. This is a horrible invasion of trans children's privacy, but doesn't stop there. Some parents can get aggressive about eliminating their child's competition for spots on cheerleading squads or college resume-burnishing athletic events. No girl is safe from people leveraging these accusations to force her off a team.

The ubiquitous nature of rainbow flags and family-friendly Pride events may lull many folks into believing that the struggle over LGBTQ rights is over and the good guys won. But clearly, Republicans aren't ready to move on. They have dramatically escalated efforts to define queer people as threats to society, and especially to children. And they're using Pride, and the attention it draws, as an opportunity to spread lies and conspiracy theories meant to demonize the LGBTQ community. Marjorie Taylor Greene, for instance, used Pride to push an asinine theory that "no one will be straight anymore" in "four or five generations," escalating these false claims that accepting the existence of LGBTQ people is a threat to straight people.

As with most things right-wing, this is pure projection.

LGBTQ people aren't trying to "convert" anyone. As Yiannapoulos, the "ex-gay" troll, shows, the opposite is true: It's conservatives who won't let go of their insistence that they can convert queer people to straight people. (They can't. Conversion "therapy" is just abuse meant to bully people into the closet.) It's the same thing with the accusations that LGBTQ people are a threat to children. In reality, it's Republicans who are passing bills forcing genital inspections on kids, threatening to tear kids from loving families, and bullying LGBTQ kids into hating themselves and hiding in the closet. In some places, they're even taking away life-saving mental health care access for kids, in order to keep counselors from telling queer kids that they are fine the way they are.

Republicans using Pride as an opportunity to escalate their deeply scary and damaging attacks on some of the most vulnerable young people in our society is a clear sign of an emboldened movement.