TinyMart is sharing this content, the original was posted on LGBTQNATION by
LGBTQ Nation, ﻿ Thursday, March 17, 2022, So please click here to go there
.

And then her mom stepped to the mic to say a few words. Because she had something to say to the GOP pervert. 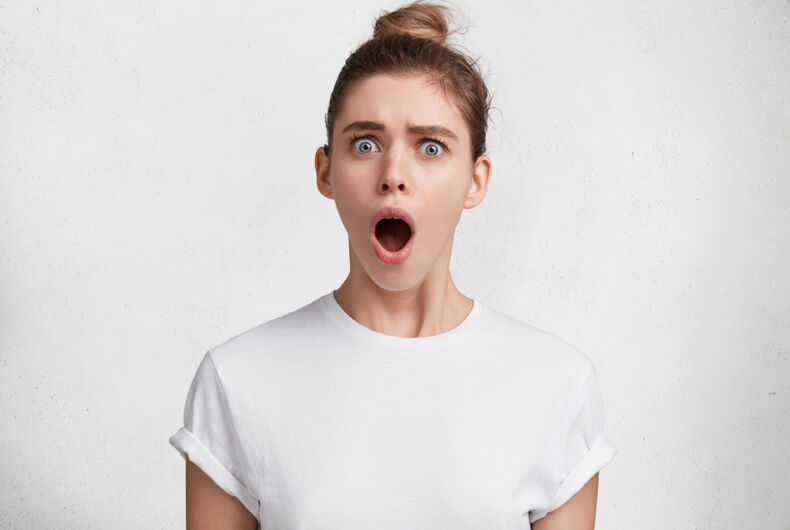 A Republican senator was caught on video asking a 14-year-old child about their genitals.

In a video of Gannon’s questioning of Jackson — posted by the Human Rights Campaign — Gannon said that it “creates problems” in girls’ bathrooms when people realize that someone in the bathroom “has a male body.”

“No it doesn’t,” Jackson responded. “You should let people go to the bathroom.”

Gannon replied that other girls probably don’t realize that Jackson is different because she has long hair.

Gannon then asked, “Are you gonna go through the procedure?” She likely meant a gender-affirming surgery on Jackson’s genitals.

Unfazed by Gannon’s question, Jackson said, “You think we’re going around forcing our genitalia in people’s face? We’re trying to use the bathroom. And what you want to do is not let people do that.”

Avery Jackson’s mother, Debi Jackson, then spoke directly to Gannon, saying, “You’re asking a 14-year-old on public record about genitals and if people could see that. How would anyone know?”

She then mentions that she and other parents of trans children have been visiting the state legislature for seven years trying to get legislators to understand their kids’ needs.

“Kids aren’t going around exposing themselves to kids wanting to play sports with their friends,” Debi Jackson said. “That’s what the bill is. And getting wrapped up in bathrooms gets us so far away from that, and it dehumanizes our children.”

“My child is so much more than genitals,” she continued, “And that’s what I need you to see. That’s what every family who has come in here, year after year, is begging you, demanding that you see.”

“I don’t know what your genitals are,” she added. “I have not made an assumption, and I’m not willing to ask that question because it’s frankly inappropriate.”

At another point in the hearing, Patrick Sasser, a trans girl’s father pointed out the hypocrisy of the so-called Save Women’s Sports Act.

“If the goal is to save women’s sports, let’s ramp up Title IX, let’s get equal funding for women’s sports, consistent equal opportunities, equipment, let’s increase oversight,” Sasser said, according to the St. Louis Post Dispatch.

Another person noted that many female athletes have no issue competing against trans women, and that the bill exists solely to antagonize trans female students.

The Missouri State High School Activities Association already allows trans girls to play on girls teams after one year of hormone treatment and continued treatment after that.

Transphobic Republicans have proven time and again that they’re obsessed with children’s genitals. Bills proposed in Florida, Florida and Idaho have all called for genital examinations for girls.