Republican promises to vote to ban contraception if given the chance

TinyMart is sharing this content, the original was posted lgbtqnation.com by  Alex Bollinger Friday, May 20, 2022 So please click here to go there
. 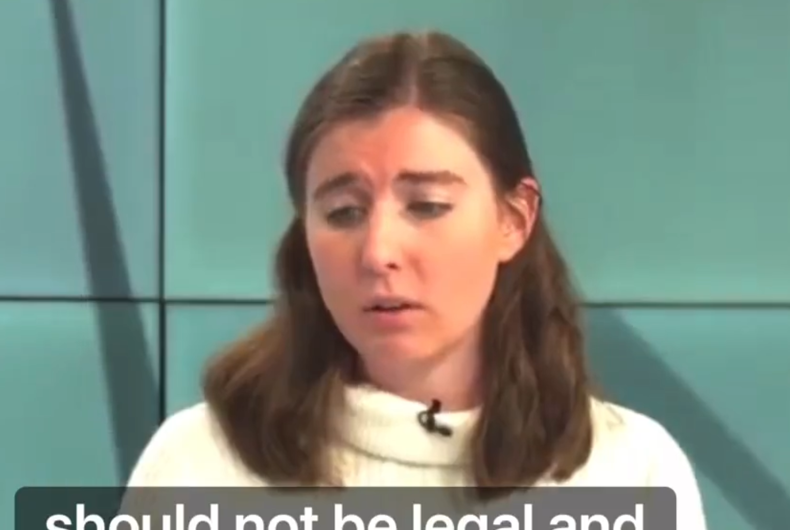 Michigan state house candidate Jacky Eubanks (R) said that she wants the state to ban birth control and said that she would vote for a bill doing so if it came up for a vote.

“I guess we have to ask ourselves, would [a bill banning contraception] ever come to a vote,” she told Church Militant’s Michael Voris. “And if it should, I would have to side with, it should not be legal.”

Eubanks’s Instagram account proudly proclaims that she’s “Trump endorsed” and her profile picture is a picture of her with Donald Trump. Her bio says she’s “America 1st/Anti-Commie.”

Her comments come shortly after a leaked draft Supreme Court opinion showed that the Court is likely to overturn Roe v. Wade and end the federal right to an abortion in the U.S. Liberals have said that the opinion will put other rights – like the rights to marriage equality and contraception – at risk since the Court’s decision attacks the very idea of a right to privacy in the Constitution.

Many conservatives have said that liberals are fearmongering about the threats to other rights, but Eubanks lays out exactly why she thinks the government should ban people from being gay, ban marriage equality, and ban contraception.

“I think that people believe that birth control is pretty… it’s better, like you said, because oh then you won’t get pregnant and you won’t need to have an abortion,” Eubanks said. “But I think that it gives people the false sense of security that they can have consequence-free sex. And that’s not true and it’s not correct.”

“Sex ought to be between one man and one woman in the confines of marriage,” she said.

“And open to life,” Voris added, because straight, married people also use contraception and get abortions because they have sex and they don’t want to have dozens of children.

Voris claims he used to be gay. He has said that he used to have relationships with men that he had to publicly confess “in order to start proclaiming the great mercy of God.”

“I will now reveal that for most of my years in my thirties, confused about my own sexuality, I lived a life of live-in relationships with homosexual men,” he said in a 2020 podcast episode. “From the outside, I lived the lifestyle and contributed to scandal in addition to the sexual sins. On the inside, I was deeply conflicted about all of it. In a large portion of my twenties, I also had frequent sexual liaisons with both adult men and adult women.”

He said that his mother used to pray that he would “give up my sinful life and return home to the Church.” He said that she prayed “to be given whatever suffering needed so that I would be granted sufficient grace to revert” to heterosexuality and that she was diagnosed with stomach cancer shortly after.

“During the last year of her life, I began to change by beginning to frequent the sacraments more often,” he continued. “When my mom died, I pledged at her coffin that I would change. I said, ‘Mom, what you went through for me, you will not have gone through in vain.’”

He said that he returned to the Catholic Church and “was thrilled, over the top with gratitude for what God had done for me through my mom and her suffering.” That is, he was happy his mom got cancer and died so that he could be straight.

“Since my reversion, I abhor all these sins, especially in the world of the many many other sins I have committed having nothing to do with sexuality,” he continued. “I gave in to deep pains from my youth by seeking solace in lust, and in the process, surrendered my masculinity.”