TinyMart is sharing this content, the original was posted on lgbtqnation.com by ﻿ Alex Bollinger, Wednesday, October 5, 2022, So please click here to go there
.

He said that now that the Supreme Court overturned Roe v. Wade, it's time to go after LGBTQ marriage rights. 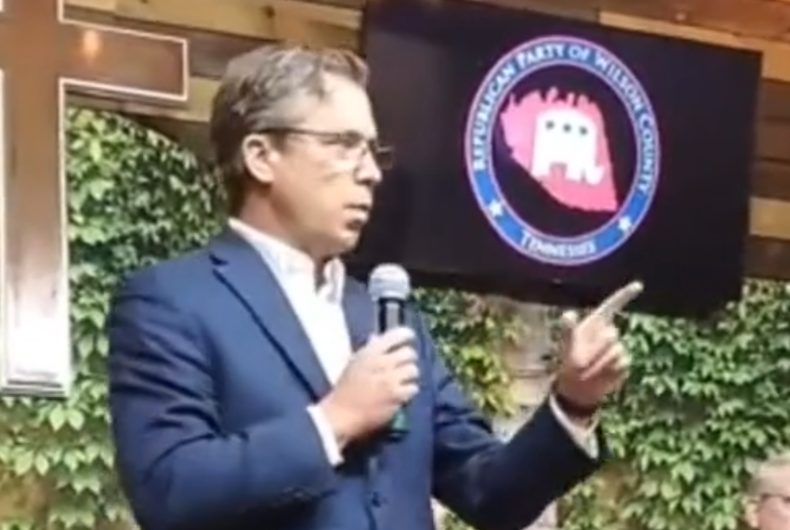 A Republican congressional candidate in Tennessee is facing backlash for saying that the federal government should repeal same-sex marriage rights.

“We are a republic of free states,” congressional candidate and Maury County Mayor Andy Ogles (R) said at a candidate forum in June hosted by the Republican Party of Wilson County as part of the primary campaign. “So California has the right to be liberal. Tennessee has the right to be conservative.”

“What the Supreme Court has done with Roe v. Wade and also with overturning the New York gun ban is standing firm on the 10th Amendment,” he continued. “The next thing we need to do is go after gay marriage. We need to revert that back to the states, so each and every state can decide her destiny.”

“As a member of Congress, we’ll empower the states to take action on those issues, whether it’s guns, marriage, or abortion.”

It’s unclear what he believes Congress can do short of passing a constitutional amendment, since he’s calling for an end to Obergefell v. Hodges, the 2015 Supreme Court decision that legalized marriage equality in all 50 states. Before Obergefell, same-sex couples in more conservative states – like Tennessee – couldn’t get their marriages recognized where they lived. Obergefell said that state bans on same-sex couples getting married were unconstitutional.

“If Ogles gets his way, states like Tennessee will ban same-sex marriage again and start discriminating against our families and loved ones,” Campbell wrote.

In a follow-up tweet, Campbell was more direct: “Hey Andy Ogles… If you don’t like same-sex marriage, don’t marry a man…. But stop trying to use the government to attack people’s freedom based on your moral judgements.”

Tennessee’s Fifth has been represented in Congress by Rep. Jim Cooper (D) since he first won the seat in 2002. In January, he announced that he would not seek reelection this year because the Fifth – which includes Nashville – had been split between three other districts to create an extra Republican seat.

Worries that the Supreme Court would overturn Obergefell and again allow conservative states to ban same-sex couples from marrying started when Roe was overturned in June, since Obergefell was based on a similar legal framework. Moreover, Justice Clarence Thomas said that the Court should “reconsider” Obergefell. Donald Trump appointed three conservatives to the Court since Obergefell, giving them a six-three majority.