TinyMart is sharing this content, the original was posted on lgbtqnation.com by  Alex Bollinger, Monday, October 31, 2022, So please click here to go there
.

Robert Jeffress has advised Mike Pence and Donald Trump. He also once advised a suicidal lesbian teen to go to conversion therapy. 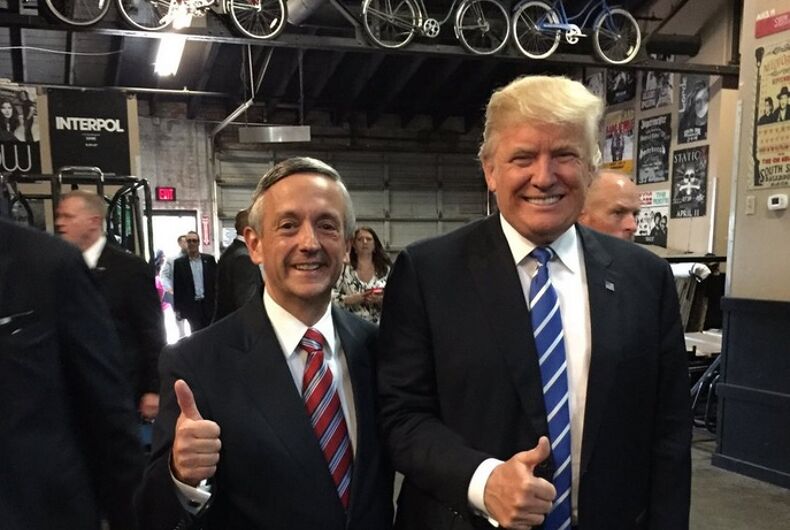 Powerful anti-LGBTQ Texas pastor Robert Jeffress said that the U.S. was “founded as a Christian Nation” and that conservative Christians should “impose their values on society.”

Jeffress, who is the senior pastor at the 14,000-member First Baptist Church in Dallas, was on Real America’s Voice talking about rising Christian nationalist sentiment in the U.S.

Christian nationalism is the idea that the U.S. should be an explicitly Christian nation and that there should not be a separation of church and state.

“We always put our love for God above everything, even allegiance to our country,” he said about conservative Christians. “But that’s not what they’re really talking about. Listen carefully. They say they are opposed to people who say America was founded as a Christian nation, Americans who believe not only in the spiritual heritage of our nation, but believe that we ought to use elections to help return our country to its Christian foundation.”

“If that’s Christian nationalism, count me in,” the pastor laughed. “Because that’s what we have to do. And what’s so hypocritical about this, Tim, is the left don’t mind at all imposing their values on our country through the election process. They don’t mind forcing their pro-abortion, pro-transgender, pro-open borders policy upon our nation.”

“But they object when conservative Christians try to impose their values on society at large. It’s complete hypocrisy.”

Jeffress has had access to some of the most powerful Republicans in the country. He was a member of Donald Trump’s Evangelical Executive Advisory Board and had Mike Pence speaking in his church back when he was vice president. In 2017, he spoke at a private inaugural service for the Trump and Pence families.

He also has a long history of anti-LGBTQ sentiment. In his 2004 book Hell? Yes! (which was re-published in 2008 under the title Outrageous Truth… Seven Absolutes You Can Still Believe) contained the “truth” that “homosexuality is a perversion.”

In that chapter, Jeffress wrote about a high school senior called “Susan” who had just come out.

Jeffress said he asked her how “God feels about your homosexual activity?”

“I understand now that God created me with these desires, desires that I have had since I was a little girl,” she responded, according to Jeffress. “For years I have been miserable trying to deny those feelings and have seriously contemplated suicide. But now that I have accepted who I am, I am happier than I have ever been in my life!”

Most people would probably be glad that a teenager who was considering suicide was feeling better, but not Jeffress. He wrote that “homosexual relationships are neither ‘normal’ nor ‘healthy’” and that gay activists are really working “to cover over the darkest secret associated with this perversion: child molestation.”

“None of us gets a ‘pass’ from God for rebellious behavior just because it arises from our innate desires, regardless of the cause of those desires,” he wrote. “But here is the good news: Through the power of Jesus Christ, all of us can be freed from acting on those desires.”

He added that it’s a “myth” that “homosexuality is a fixed desire and cannot be changed.”

As for Susan, he concluded: “I wish I could report that after hearing the above information, she renounced her homosexual tendencies, confessed her sin to God, and left my office with a newfound attraction to the opposite sex. She didn’t.”

“I have talked to people who have undergone therapy like this and they have said as Christians it has helped them manage their temptations,” Jeffress said. “No therapy can remove those desires that we all have in different areas of life, but as a Christian, we have the power to overcome those desires and I think that’s the true reparative therapy that only comes to those who know Jesus Christ his savior.”

In 2008, he delivered a sermon entitled “Gay is not OK” in which he called gay people “filthy.”

“It is so degrading that it is beyond description,” he said in the sermon. “And it is their filthy behavior that explains why they are so much more prone to disease.”

He has also said that marriage equality is a sign of the “last days” and in 2011 he said that he learned about the “brilliant plan of gay activists to normalize the abnormal practice of homosexuality using the same brainwashing techniques that had been used by the Chinese for hundreds of years.”

In 2015, he insisted that Christians are being “martyred” by LGBTQ people for being asked to follow the law.

“What is happening is that we are becoming desensitized to the persecution of Christians just not globally, but also in our Country,” he said. “The fact is that we are being told that Christians who refuse to serve a wedding cake to a gay couple, that they are extremists, its OK to take their livelihood and shut down their business. I believe that we are getting desensitized to that, which will pave the way for that future world dictator, the Antichrist, to persecute and martyr Christians without any repercussions whatsoever.”