TinyMart is sharing this content, the original was posted on lgbtqnation.com by ﻿ Alex Bollinger Friday, September 23, 2022, So please click here to go there
.

"I can't imagine a situation where I would attempt to undo one of their marriages. So what makes them think that they are fit to pronounce upon mine?” 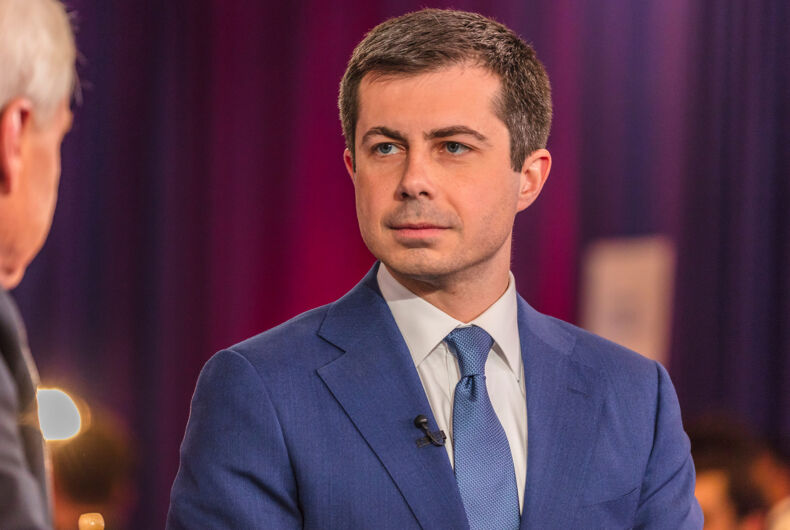 Out Secretary of Transportation Pete Buttigieg called out Sens. Ted Cruz (R-TX) and John Cornyn (R-TX) and Texas Gov. Greg Abbott (R) for their attacks on LGBTQ rights, asking why they think they are qualified to judge and tear apart LGBTQ families and take trans kids away from their supportive parents when no one is attacking their families in the same way.

Buttigieg was taking part in the 2022 Texas Tribune Festival. Journalist Evan Smith interviewed Buttigieg for over an hour, mostly about transportation policy, but asked a question towards the end about how Buttigieg feels about Cruz’s and Cornyn’s stated opposition to the Respect for Marriage Act, which would protect federal same-sex marriage rights should the Supreme Court overturn its 2015 Obergefell v. Hodges decision.

Buttigieg started talking about how happy his family – his husband Chasten and their two kids – makes him, and said, “It’s puzzling to me that anybody would want to tear that up.”

“I’ve met both of your senators and your governor,” he told the Texan reporter. “I don’t know their spouses. I don’t really think about their marriages. But I can’t imagine a situation where I would attempt to undo one of their marriages. So what makes them think that they are fit to pronounce upon mine?”

Citing the Supreme Court’s decision in Dobbs v. Jackson Women’s Health Organization – which ended the federal right to an abortion in the U.S. in overturning Roe v. Wade – he said that freedom in America may have already peaked.

“The best thing about America is that every generation, more or less, has gone on to see greater rights and freedoms than the generation before it,” he said. “It has not been a straight line, it’s been a zig-zag, but if you look at the sweep of history, it has moved – in this country – in a very clear direction toward more rights, more freedoms, freedoms that have changed my life.”

“Sitting next to you as a married man and a war veteran who can talk about his husband and kids would have been, and be in this job that I’m in – would have been preposterous just 10 years ago,” he continued. “The question now for all of us living in America in these times is: Did we just live to see the high-water mark of rights and freedoms?”

Buttigieg also brought up Abbott’s order for the Texas Department of Family and Protective Services to investigate the supportive families of transgender children this past year for child abuse, threatening to take children from non-abusive households and put them in foster care if their parents affirmed their identities as transgender.

“You have a governor who, I mean, one minute they’re talking about parents’ rights, and next thing you know, they’re attacking parents, who, when confronted with that sometimes disorienting and sometimes even frightening situation of your kid coming out to you, being in an incredibly vulnerable position trying to do the right thing for your kids and a government official wants to come and investigate you for trying to take care of your kids?” Buttigieg said.

“They’re talking about banning books! They are banning books!” he said. A recent PEN America report found that Texas is the state that has banned the most books in the past year.

Cruz has come out against the Respect for Marriage Act. In September, he said that protecting federal recognition of same-sex marriage will violate religious freedom and would result in “weaponizing the Biden administration to go and target universities, K-12 schools, social service organizations, churches and strip them all of their tax-exempt status.” It is not clear how the bill would lead to those consequences.

Cornyn opposes the Respect for Marriage Act as well. He said in a statement in July that marriage equality is “already the law of the land. I think it’s a contrived issue because the Supreme Court decided the issue, so I don’t see any reason for the Congress to act.”