Out Dem. Will Rollins is fighting to unseat a 15-term MAGA Congressman with an anti-LGBTQ past

TinyMart is sharing this content, the original was posted on lgbtqnation.com by  Greg Owen Thursday, October 6, 2022, So please click here to go there
.

"When your congressional representative cares more about their own pockets than yours," Rollins says, "you can't trust them." 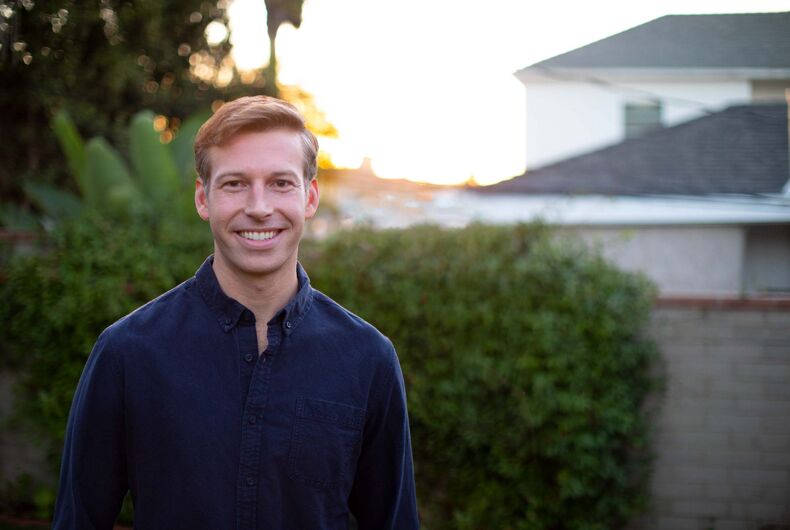 The race for Congress in a newly redrawn district in Southern California is a study in contrasts.

California 41, a three-headed monster about a hundred miles wide, extends from the eastern edge of Orange County through ruby red Riverside, and over the San Jacinto Mountains to Palm Springs, a sunbaked blue enclave in the Coachella Valley.

And the Democratic and Republican candidates running to represent the district couldn’t be any more different, either.

The Democrat, Will Rollins, 38, is a graduate of Dartmouth College and Columbia Law, a former federal prosecutor who worked on January 6 insurrection cases, and a polymath on issues ranging from counter-intelligence to the attention economy to the climate crisis. He’s also refreshingly candid about his sexuality: he’s gay and couldn’t be prouder.

The Republican, 69 year-old Rep. Ken Calvert is reminiscent of a caricature from a late-19th century Thomas Nast cartoon, perhaps straddling the Capitol and swatting away constituents with one hand while counting his cash with the other. According to Rollins, that’s exactly what Calvert’s been doing over a 30-year career in Congress.

“He’s corrupt,” says Rollins. “He’s somebody who was ranked by a nonpartisan group, for multiple consecutive years, one of the most corrupt members of Congress. His net worth has increased up to $20 million since he took office in 1992.”

One well-documented case revealed how Calvert bought land before earmarking the funds for a major highway interchange in the same area. “That, of course, increased the real estate value for those empty plots before anybody else knew about it, and he made a half-million dollar profit in a matter of months.”

“When your congressional representative cares more about their own pockets than yours,” Rollins says, “you can’t trust them.”

With a new set of demographics to contend with — California 41 is about evenly split Democrat and Republican, whereas Calvert’s old district was solidly GOP — the 15-term incumbent is playing to a different audience.  The newly redrawn district explains a lot about the MAGA Republican’s sudden conversion on same-sex marriage.

After an unbroken record of anti-LGBTQ votes in Congress, Calvert voted this summer in favor of the Marriage Equality Act. “He’s said that he’s evolved,” Rollins says. “And I think that the truth is, the only thing that’s evolved is his calculus for political survival. This is somebody who started his political career by outing a closeted opponent, right?”

In 1994, after getting caught by police with a prostitute in his car, Calvert was fighting for his political life. An ally outed his rival, Mark Takano, as gay, while the freshman congressman sent out mailers, printed in hot pink and lavender, asking “Is He or Isn’t He?” and “A Congressman for Riverside… Or San Francisco?” Calvert won the race by 17 points.

He “just coincidentally, after Palm Springs is drawn into his congressional district, takes the first pro-LGBTQ vote in his history as member of the House.”

“Voters,” says Rollins, “are going to see through that kind of BS.” It’s “a big part of the reason I think I’m gonna flip the seat.”

Rollins grew up in Manhattan Beach in LA’s South Bay and has family in Murietta, just drawn out of the new district he hopes to represent. He recently decamped from nearby Canyon Lake to Palm Springs, where he lives with his partner Paolo Benvenuto, a clean tech engineer at Google. “We met in New York, when I was in my second year of law school, at a mutual friend’s birthday party,” says Rollins. “The old fashioned way, pre-Grindr.”

Rollins came out in his 20’s. “I feel lucky to have come out when I did, but also wish I was like, as I’m sure most gay guys will say, always wish that they had done it earlier.”

Asked about his time at Dartmouth, Rollins says it wasn’t conducive to being openly gay. “It’s a conservative environment. It’s a fratty environment. You know, I joined a fraternity. There’s a lot of misogyny and homophobia that was really pervasive at the time. And honestly, some of which I myself contributed to, with or without knowing it.”

“One of the things that closeted gay guys sometimes experience is, you don’t realize just how deeply internalized your own homophobia is. And, you know, it can be a really difficult process to get through that, and also to take ownership of our own contribution to homophobia, even being LGBTQ. If we don’t talk about that openly, I think we do a disservice to advancing our rights. You know, we all have to really try to push back against all different kinds of stigma, including sometimes some of the stigma that we internalize against ourselves.”

Rollins says that kind of accountability extends to Congress in the wake of the Supreme Court’s retreat from personal rights in the decision to overturn Roe v. Wade.

“There’s a whole host of steps that the next Congress has to take to make sure that we keep government out of our lives,” Rollins says.

“Codifying Roe so that women have the freedom to control their own bodies and their own destinies. Codifying the protections in Lawrence vs. Texas so that LGBTQ people have the freedom to love whoever they want to love. Codifying gay marriage, which I hope happens as soon as possible. And codifying protections for LGBTQ kids, who are now being targeted by Republican legislatures in places like Texas, Utah, Florida.”

“And so the next Congress has to prioritize all of those issues because they are fundamental to human rights and fundamental parts of what makes America an exceptional place where all people can succeed and thrive regardless of what they look like or who they love.”

“I think that that’s exactly the kind of message that has been resonating with voters in California 41. So I’m feeling confident, and I think we’ll beat Calvert by four points.”