TinyMart is sharing this content, the original was posted on lgbtqnation.com by ﻿ Greg Owen Sunday, July 31, 2022, So please click here to go there
.

While nearly all the Republican candidates are in thrall to the MAGA wing of the GOP, Mayes isn't running to play games with democracy. 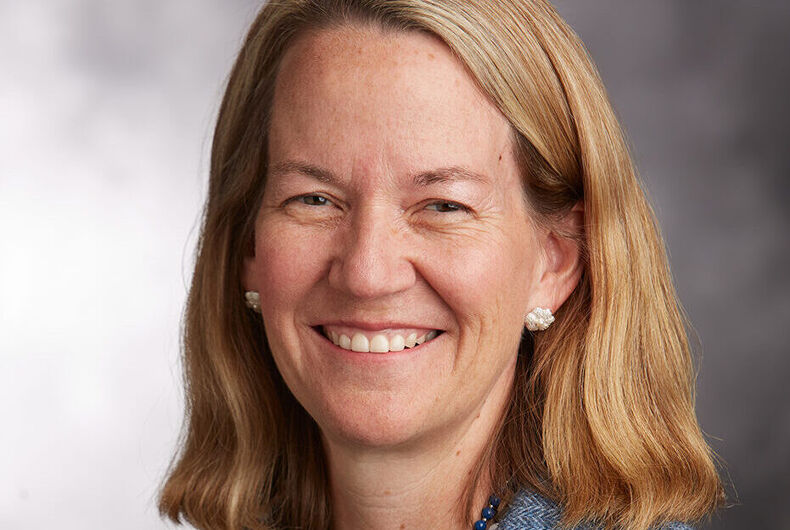 Kris Mayes, the presumptive Democratic nominee for Attorney General of Arizona, laughs easily, and often. A policy wonk first, Mayes has the sterling academic credentials that would guarantee her election if the race was only about smarts.

But she’ll be facing one of six Republicans running for the job, nearly all in thrall to the MAGA wing of the GOP. This race won’t be about brains.

So it probably helps to have a sense of humor as Mayes, 50, wades into what’s bound to be an ugly election brawl.

LGBTQ Nation spoke with the candidate from her home in Phoenix, where she lives with her 10-year-old daughter, Hattie, and asked which Republican she thought she’d be up against.

She laughs. “I have no idea. I have no idea! ‘Cause there’s 6 of them, so we’ll see. But I’m willing, and looking forward, to running against any of them, ’cause we’re gonna—”.

“I do not believe any of them represent the values or the priorities of Arizonans, one whit. These are going to be hard-fought battles for Arizona’s future.”

The “’causes” and “one whit” are a giveaway to Mayes’ upbringing in rural Arizona,  where straight-shooting and brevity are obligatory.

Raised on a tree farm in Prescott, in the rugged central part of the state, Mayes attended public schools and matriculated to Arizona State University, where she majored in political science and graduated valedictorian. She served as editor-in-chief of the school’s State Press newspaper and earned a Truman Scholarship, a graduate fellowship for public service leadership.

Along the way, Mayes found time to co-author a book, Spin Priests: Campaign Advisors and the 2000 Race for the White House, and serve as campaign press secretary for Democrat Janet Napolitano’s successful run for governor in Arizona in 2002.

In 2003, Napolitano appointed Mayes to the Arizona Corporation Commission, the state’s public utility regulator, where she focused on renewable energy. She was elected to two full terms, serving until 2010.

Since then, Mayes has been in private practice as an attorney and on the faculty of ASU, where she works as a senior scientist at the Global School of Sustainability and teaches a course on energy law at the Sandra Day O’Connor College of Law.

O’Connor, the retired Supreme Court Justice, along with straight-talking senator and presidential candidate John McCain, used to represent the mainstream Republican party in Arizona, which Mayes identified with until 2019. That year, she became a Democrat. Like many GOP moderates, Mayes says the party left her, not the other way around.

No issue represents that schism more than the battle over abortion rights. The Supreme Court’s recent decision overturning Roe v Wade still echoed through the interview.

“My initial reaction was, and has been, and continues to be that it’s devastating for American women and it’s going to have terrible repercussions for our country.”

Mayes got straight to the point: if elected, “I will never prosecute a woman or a doctor or a pharmacist for abortion or reproductive services.”

If it’s the law in Arizona — a 15-week ban signed by Gov. Doug Ducey (R) in March goes into effect in September — how does Mayes reconcile her pledge with being the state’s top law enforcement officer?

“The language in our right to privacy is that ‘no person shall be interfered with in their home or their private affairs.’ And I think nothing could be more private than what a woman does with her body, or what she chooses to do with her body. I think the same can be said for LGBTQ rights, as well.”

I asked if the Arizona Supreme Court would be the final arbiter.

“Alternatively, if any one of the six Republicans running wins, we will have a state in which doctors are potentially imprisoned for up to five years for assisting a woman with reproductive services. Or pharmacists for that matter, or nurses. So it’s a very stark difference between me and my Republican opponents.”

Another difference: Mayes is the only openly gay candidate in the race.

I told her: “One of the first things I typed into Google when I started researching you was, “Kris Mayes gay”.

“And I got nothing, except the Victory Fund page you’re featured on.”

(The Victory Fund is a non-profit devoted to promoting LGBTQ candidates and equal representation in elective office in the US.)

“It doesn’t seem to be an issue in the campaign, or something your campaign is highlighting.”

I could practically hear Mayes blush.

“So, in your public life, have you always been out? Or is it something you came to embrace at a particular time?”

“Has something changed in that time?”

“No, but no one’s asked me about it during that time either, so.”

“So it’s not something you’re selling, so to speak.”

“Well, I don’t know. I mean, is anyone selling their… What do you mean by that?”

When I start to suggest that, depending on their audience, a candidate’s sexual orientation can be a selling point in some communities, she interrupts.

“I’m certainly very proud of the Victory Fund endorsement. That’s certainly something that we’ve touted, and that’s been terrific, and they’ve been incredibly supportive of the campaign.”

While Mayes is reticent to talk about her private life, maybe another indicator of a her Arizona frontier upbringing, she wasn’t shy about her unequivocal support for LGBTQ rights and communities. 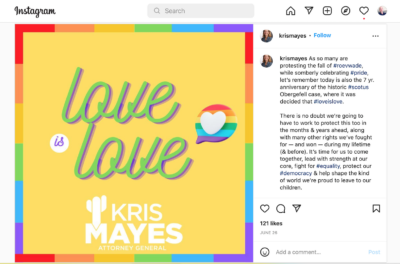 In the first half of this year alone, Republican Gov. Doug Ducey signed into law three discriminatory pieces of legislation limiting the rights of LGBTQ people: Senate Bill 1399, allowing third party child welfare agencies to discriminate on the basis of religion and imperiling same-sex adoption and foster care; Senate Bill 1138, which bans some types of medical care for transgender youth; and Senate Bill 1165, which prevents transgender students from participating in school sports consistent with their gender identity.

“Yeah, it’s just a legislature that has run amok,” says Mayes. “And it’s doing things in the form of bills like that that are just mean-spirited and discriminatory, and are not where they oughta be putting their focus.”

“Under some of these laws, including the 1901 ban (an artifact of Arizona Territory law banning abortion and potentially triggered by the Roe overturn), and the personhood law that we also have here that’s in the courts right now, I think IVF would be an issue, and that’s how I had my baby and it’s obviously how a number of gay couples have children.”

Mayes says of the right to privacy in the Arizona constitution that protects a woman’s right to choose, “The same can be said for LGBTQ rights, as well.”

“The other thing we didn’t talk about but is really important for the LGBTQ community is the fact that we’ve gotta protect our democracy here in Arizona. All six candidates for attorney general stated that they either would have not certified the 2020 election or they cast serious doubt on the election results, and we just cannot have a lawless attorney general. You see in the candidates that I’m running against just a general willingness to undermine our democracy.”

At the Republican attorney general candidates’ debate earlier in July, the moderator asked if any of the six running would be an “advocate” in office. They replied they would be. Most if not all identify as MAGA adherents. Would Mayes be an “advocate”, as well?

She brushed off any implication of partisanship.

I asked how she felt about Donald Trump holding a rally in her hometown last weekend. (The event outside Prescott featured Trump’s endorsed candidate for attorney general, Abe Hamadeh, who said at that same Republican debate: “I think our country is quickly going to hell.”)

Mayes laughs out loud. “Yeah, that was most unfortunate.”