TinyMart is sharing this content, the original was posted by  Erin Rook.  Wednesday, March 2, 2022 So please click here to go there
.

Toxic masculinity contributes to the bullying of gay male students, but also plays a factor in their academic success. 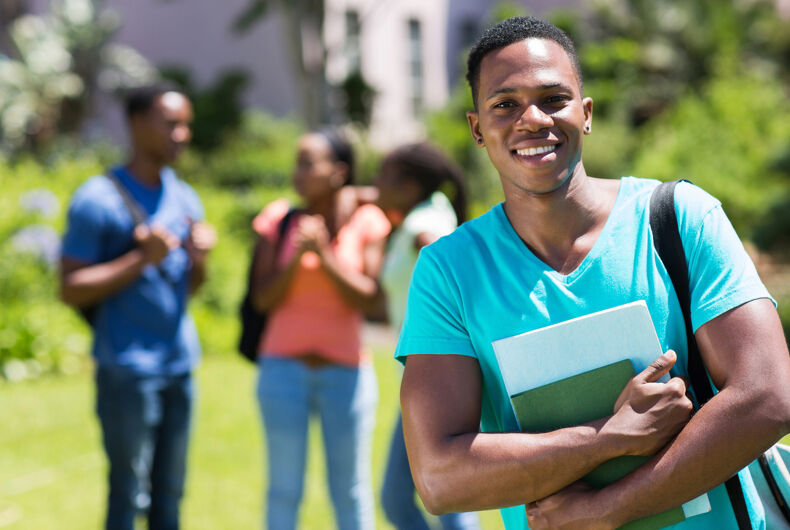 While being a straight man comes with plentiful privileges, it appears that academic success is not one of them. When it comes to academics, gay men are at the head of the class.

“If America’s gay men … formed their own country, it would be the world’s most highly educated by far,” the study’s author Joel Mittleman wrote in the Washington Post.

Related link: These shameful colleges are the absolute worst for LGBT students.

Mittleman’s findings, published in the American Sociological Review, add nuance to concerns over the poor academic performance of men and boys in the United States.

That academic edge was found across a number of measures and exceeded the advantage associated with any other factor. But it did not appear to extend to queer women, who performed more poorly and were especially apt to struggle if they were also Black.

Author Joel Mittleman, a University of Notre Dame sociologist, noted that Black gay women are less likely to graduate from college than their white peers.

Among the study’s key findings:

“This article is focusing a lens on what we do to all kids,” University of Utah psychology professor Lisa Diamond told NBC News. “And the most vulnerable kids are going to show it first.”

Diamond hypothesized that while both gay male and lesbian students both experience the minority stress associated with being LGBTQ, they may respond differently to its influence.

“To the extent that it’s feminine to study and appreciate validation in an academic sphere, the gay boys will have an advantage,” Yale School of Public Health psychologist John Pachankis told NBC News.

Mittleman said this trend may be connected to the “Best Little Boy in the World” phenomenon, in which gay men seek superlative achievement in order to counter internalized homophobia. Queer women and girls, however, may express themselves in ways that are perceived as masculine or rebel against “good girl” norms.

So what can we learn from gay male students? According to Mittleman, “it is long past time to rewrite the rules of American masculinity.”