TinyMart is sharing this content, the original was posted on lgbtqnation.com by ﻿ Greg Owen Saturday, September 10, 2022, So please click here to go there
.

A lesbian couple was left "crying with laughter" after seeing two missionaries react to their very gay welcome mat. 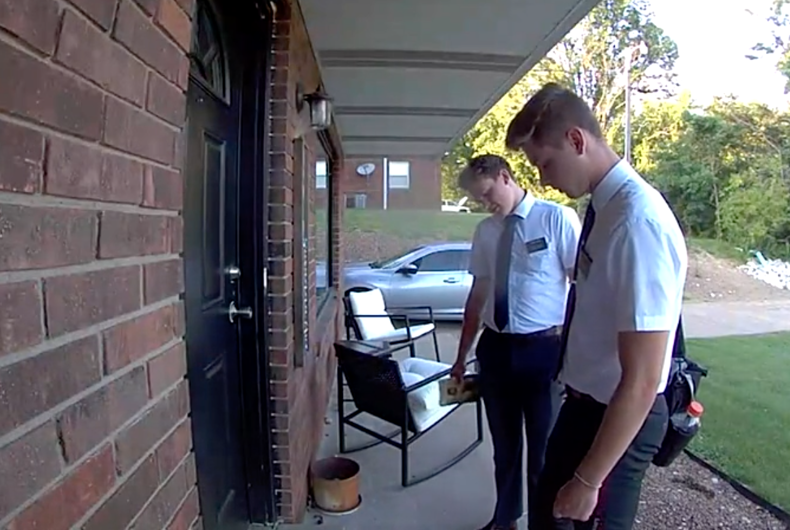 According to their doormat, the Indiana home of Jamie Foust and her wife Melissa’s house is the “Gayest Place in Town.”

Apparently, it was too gay for a pair of proselytizing Mormon missionaries who were caught on the couple’s doorbell camera, leaving after they saw the message underfoot.

The moment left the lesbians “crying with laughter.”

Foust, 28, and her wife, 32, bought the coir and rainbow-trimmed doormat from Target during Pride month as a gag. It was on sale for 10 bucks.

Two months later, Foust was checking out her doorbell cam footage, which had doormat in view, when the Mormons walked into the picture.

The Mormons had arrived at the “Gayest Place in Town.”

“Gayest?” one asked out loud. “Nope”, replied the second, and they moseyed away.

Whether the “nope” indicated the address wasn’t ripe for preaching, or whether the missionaries believed the home was not, in fact, the Gayest Place in Town, was unclear.

Foust, a factory worker, said she was “crying with laughter” watching the incident, and quickly showed it to her wife.

The pair posted the about-face to Foust’s TikTok.

“My wife and I recently got a new door mat,” Foust captioned the viddy. “It was a great investment. It says ‘gayest place in town’ and has the added benefit of keeping religious zealots from knocking on our door to tell us about their god. 😂”

The comments rolled in, both pro and anti-missionary.

Cam wrote, “As a queer and trans former Mormon, this brings me such joy 😌🌈✨💜”

Dietrich Daxon asked, “Isn’t their job to ‘save you’? They failed the ‘mission’!!”

millenialmama91 recalled, “My mom accepted missionaries into our home years ago and tricked them into helping us pack up and move 😂”

Tay loved “THE FACT THAT IT ACTUALLY WORKED 😭😭”

🐐JustDoug🐐 tried a dad joke when he was approached with the good Word. “I remember them coming to my door and their name tags said Elder Tom and Elder Bryon. I said ‘Same first names!!’ They don’t have a sense of humor 😂” he wrote.

But Morgan Mecham defended the young Elders. “Honestly I feel like them walking away is more out of respect like hey you guys do you no trouble,” Mecham wrote.

Kristina Cannon agreed. “Ppl need to remember elders are usually 18-22 yrs old. They aren’t perfect and likely walked away out of respect for you and how you want to live life,” she wrote.

chiefclaudia added, “Missionaries are such nice people. It’s heartbreaking to see people mistreat them. They’re not pushy, at all!”

According to commenter Caitlyn Stankina, missionaries should now add doorbell cams to the many hazards of missionary work.

“Saw these two at another house on tiktok😂😂” she wrote.