TinyMart is sharing this content, the original was posted on lgbtqnation.com, by Daniel Villarreal Friday, April 15, 2022, So please click here to go there
.

Republicans sneaked a last-minute amendment into a voting rights bill. One Democrat said the genital examinations would happen "over my dead body." 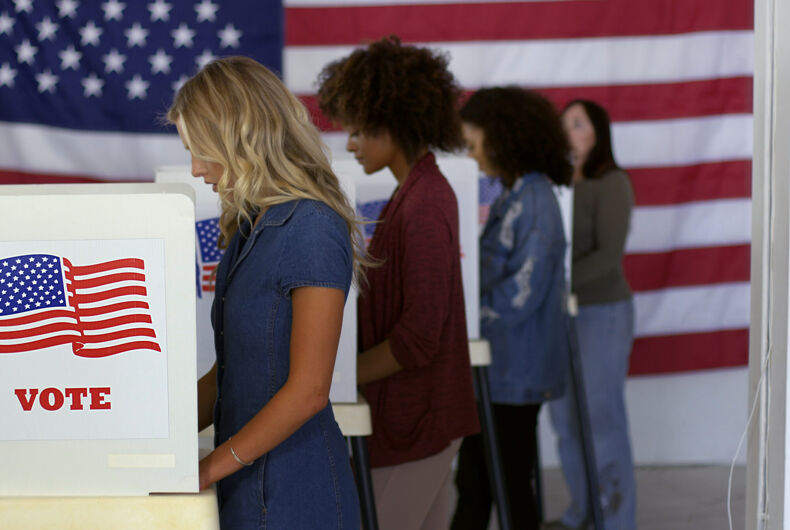 Missouri schools already have policies allowing transgender girls to play on girls’ sports teams. But thanks to a last-minute amendment sneaked into a voter ID bill, state Republicans could allow school districts to call elections on whether to ban trans athletes from public school sports.

The bill would make Missouri the first state to allow people to vote on the issue. But one Democratic legislator questioned whether the amendment would require schools to inspect children’s genitals before allowing them to play sports, something she said would happen “over my dead body.”

On Wednesday night, legislators in the state House had a three-hour debate on an elections package that would require voters to provide a photo ID to vote and the secretary of state to audit voter registration lists, KTVI reported.

During the debate, state Rep. Chuck Basye (R) added an amendment that would allow school districts to hold elections asking the voters if trans athletes with “male” on their birth certificates should be allowed to play on girls’ sports teams.

“I am very, very confident that there are people in this state, children, parents, and other citizens that feel like they don’t have a voice in this because they are afraid to speak out,” Basye said. “I want to let them know that I’m speaking for them, and I’m proud to speak for them.”

Missouri Rep. Barbara Phifer (D) responded by saying, “How in the world are you going to do this? Are we going to make children strip? We’re not going to do that in the State of Missouri. You’ll do it over my dead body.”

The Republicans stated that they weren’t trying to discriminate, stating that it’s a “biological fact” that “biological males” have physical advantages over “biological females.”

Democratic House Minority Leader Crystal Quade said Republicans are just trying to whip up their base, “Members on the other side of the aisle have said directly to my face that they spoke on this issue because of their primary elections, because they need to win elections in a redistricting year, not because they believe in this issue.”

While the amendment was approved by an 89-40 House vote, it could complicate business in the state senate. Missouri Sen. Caleb Rowden (R) said, “I would assume something like that would jeopardize our ability to get the larger package done.”

Democratic Senate Minority Leader John Rizzo said, “In a state of six million people, we’re dominating session by talking about under 150 kids that want to play sports. You have people in parts of this state that don’t have somewhere warm to sleep at night, you have teachers that are being grossly underpaid and a $1.8 billion surplus and you’re talking about kids’ sports?”

So far, 12 states have passed trans sports bans and eight others are considering similar bans. Studies have found that such bans and elections on people’s civil rights increase mental distress and suicidality among the targeted communities.

While supporters of anti-trans sports bills claim to want to protect female athletes, numerous trans athletes have pointed out that Republican legislators who support these bills have done nothing else to secure increased funding or fight the institutional sexism that actually discourages cisgender female athletes from competing in sports.