TinyMart is sharing this content, the original was posted on lgbtqnation.com by ﻿ Alex Bollinger Thursday, October 27, 2022, So please click here to go there
.
﻿

He said that "the American founders" never thought that religion shouldn't be forced on people in schools, workplaces, and communities. 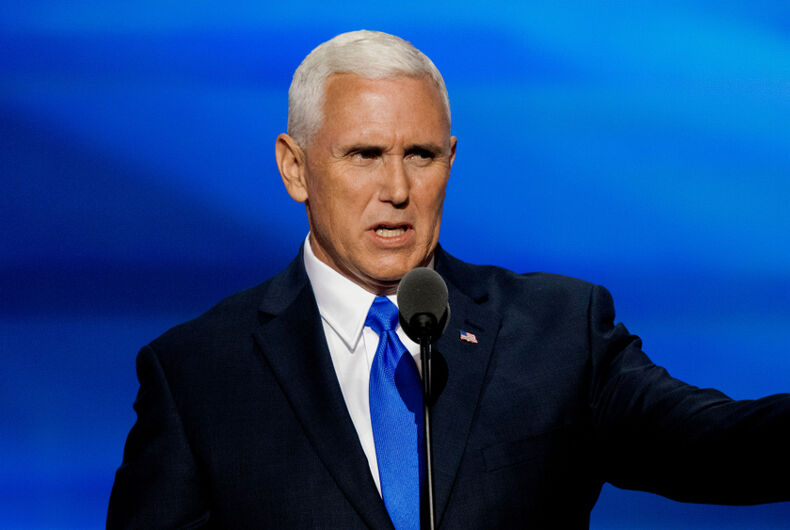 Mike Pence said yesterday on Fox Business that the First Amendment to the Constitution doesn’t provide “freedom from religion,” the idea that people shouldn’t have other people’s religious beliefs forced on them.

People are allowed to talk about the Ten Commandments and morality in the U.S.

“How can we have a truly great nation? These lefties want to scrap religion, Mike Pence, and I think it’s a terrible mistake,” Kudlow said.

Pence waited a bit – possibly to see if Kudlow was actually going to ask a question – and responded: “Well, the radical left believes that the freedom of religion is the freedom from religion. But it’s nothing the American founders ever thought of or generations of Americans fought to defend.”

“The good news is that after four years of the Trump-Pence administration, I’m confident that we have a pro-religious freedom majority on the Supreme Court of the United States,” he continued.

Despite Pence’s insistence, the First Amendment comes with two parts. He and Kudlow appeared to be familiar with the Free Exercise Clause, which says “Congress shall make no law… prohibiting the free exercise” of religion.

But there’s also the Establishment Clause, which says that “Congress shall make no law respecting an establishment of religion.”

In other words, the First Amendment gives people both freedom of and freedom from religion.

America’s founders were opposed to the government forcing religion on people, especially considering the religious oppression and wars that had plagued Europe in the centuries leading up to the writing of the Constitution.

“No man shall be compelled to frequent or support any religious worship, place, or ministry whatsoever, nor shall be enforced, restrained, molested, or burthened in his body or goods, nor shall otherwise suffer, on account of his religious opinions or belief; but that all men shall be free to profess, and by argument to maintain, their opinions in matters of religion, and that the same shall in no wise diminish, enlarge, or affect their civil capacities,” Thomas Jefferson wrote in the constitution of Virginia, showing that freedom from religion was definitely something that the founders were thinking of.

“The settled opinion here is that religion is essentially distinct from Civil Government, and exempt from its cognizance; that a connexion between them is injurious to both; that there are causes in the human breast, which ensure the perpetuity of religion without the aid of the law,” James Madison wrote in a letter in 1819. “A legal establishment of religion without a toleration could not be thought of, and with toleration, is no security for public quiet and harmony, but rather a source itself of discord and animosity.”

Pence’s views on the establishment of a national religion could be of national importance in a few years. He has suggested that he’s considering a 2024 presidential run and, as he noted in the interview with Kudlow, the president can appoint judges who can rule against freedom from religion.