Meet the lesbian couple who took down Nazis with paper bullets

TinyMart is sharing this content, the original was posted by  Jeffrey H. Jackson Thursday, March 3, 2022 So please click here to go there
.

The women were finally betrayed in 1944. The Germans imprisoned them, tried them and sentenced them to death. 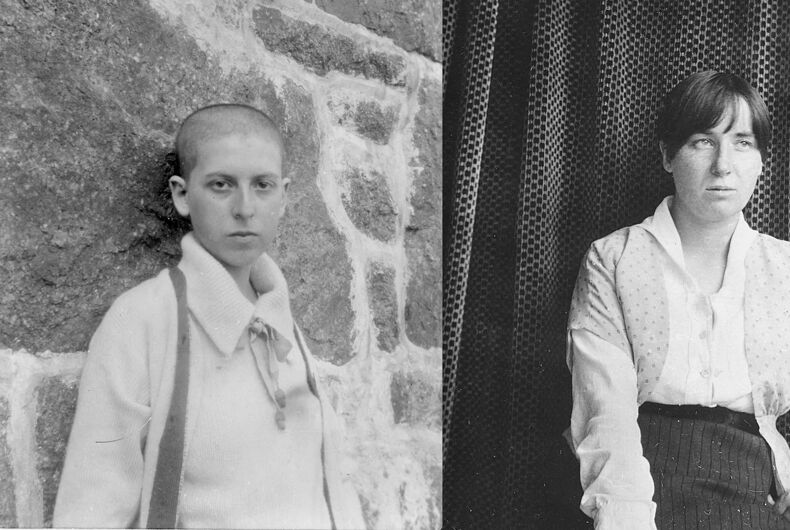 This excerpt is from Paper Bullets, the riveting and courageous story of Lucy Schwob and Suzanne Malherbe, two gender norm-defying artists better known as Claude Cahun and Marcel Moore, who undertook a dangerous years-long anti-propaganda campaign, which used art to demoralize the Nazis.

From 1940 to 1944, these French women executed an audacious anti-Nazi campaign to undermine the German troops occupying their chosen home, the British Channel Island of Jersey. Drawing on their avant-garde background, Schwob and Malherbe wrote and distributed “paper bullets” — wicked insults against Hitler, calls to rebel, and subversive fictional dialogues that amounted to their own PSYOPS campaign. They slipped their notes into soldiers’ pockets, left them on the windshields of military vehicles, or tucked them inside newsstand magazines. Written under the guise of a Nazi soldier called “The Soldier with No Name,” these notes were meant to gradually weaken the soldiers’ will to fight and to cause them to doubt their overall mission.

Related: Hate church called for death to gay people. Now they’re getting what they deserve.

Not only were these gutsy women lesbian partners known for cross-dressing and creating the kind of work that the Nazis would come to call “degenerate art,” but Schwob was also half Jewish, and both had communist affiliations in Paris, where they attended political rallies with Surrealists and socialized with artists like Gertrude Stein. Hunted by the secret field police, Schwob and Malherbe were finally betrayed in 1944, when the Germans imprisoned them, tried them and sentenced them to death for their actions. They ultimately survived, and even in jail, they continued to fight the Nazis by reaching out to other prisoners and spreading a message that hope and love can conquer all.

Lucy reached up to the opening of the ventilation shaft and pulled down on a thin string threaded through the ductwork. After carefully scribbling a note on a thin piece of toilet paper, she attached it to the thread and pulled, feeding her letter several feet through the vent. Moments later, the note appeared in the ventilation shaft in Suzanne’s cell. Suzanne delicately removed it from the filament. Others had taught them to use this and similar techniques, which they called their “postal system.”

Several times each day, Lucy and Suzanne sent messages to each other, occasionally using pages torn from a book or a sanitary napkin or some toilet paper they had stolen from the guards. Pencils smuggled into the prison were usually hidden inside a morsel of food brought by a friend from the outside and then passed between inmates. Suzanne also encouraged Lucy to tap on the pipe above her bed after lights-out to let her know all was well.

Writing and sketching helped them pass the time, but more important, it kept them connected, allowing them to share what was in their hearts. “If we were hermetically separated . . . we presented no less of a united front to our enemies,” Lucy later wrote. Th ese notes allowed her to pretend that there was no wall between them: “It’s enough to close my eyes and cross from one side to the other and freely sail away.”

The few surviving scraps of their correspondence—sent from Suzanne to Lucy apparently in November 1944—provide only a glimpse behind the walls of Gloucester Street. Some letters mention day-to-day aspects of prison life, like cleaning the cells, passing cigarettes between prisoners, doing the laundry. In one, Suzanne tells Lucy of playing with a cat in the yard during exercise.

Nearly all address Lucy as “Amour,” many wishing her “good night,” suggesting that Suzanne was writing in the twilight or evening hours to avoid being seen by Otto, the guard. In one letter, she drew two intertwined hearts. In another, she included a sketched pair of smiling lips. As she had done for decades, Suzanne, in her messages, was still taking care of Lucy. She offered to send books if Lucy needed some and discussed one she had read a few months earlier in hopes of distracting Lucy from her boredom and her fear. She reminded Lucy of experiences they shared and people they had known, using memories to connect them to the times and places before their arrest. Sometimes she offered to share small comforts. “Tell me if you want a candle,” Suzanne wrote. “I don’t have any candlesticks, but made one by melting a little one with a small spoon”—a testament to her resourcefulness. “Good night. Courage. Love,” she ended.

Suzanne tried to keep Lucy’s spirits up, telling her in one letter, “Keep smiling! as B [Bunny Vitel, a fellow prisoner] shouts to me through the floorboards.” Another ended, “Good night, my poor little chick. I hope that the migraine passes and lets you sleep.” “Good night, my bird-mouth (my cat, my wolf, my monkey), my love, and courage,” she wrote in a third.In some letters, Suzanne gossiped about Otto, joking about how he liked to go to the movies and describing how she teased their guard: “Think of it, Otto. If we had gone to France, you would have had that much more food this winter.” She noted that this elicited a chuckle from him.

When Lucy received one of these messages, she could find out about people in other cells. Suzanne usually referred to fellow prisoners by their cell numbers—2, 4, 7—either because she didn’t know their names or to save space. Sometimes she’d relate to Lucy the story of why the people behind those doors had been arrested.

Lucy could also read about the messages other prisoners had passed to Suzanne, but frequently the information was not happy. A woman and her brother were taken for interrogation one morning around 11:00 a.m. At 2:30 p.m., the brother returned alone, but then the guards took away another man in hopes of using his testimony to confront the woman about her crimes. “Don’t forget,” Suzanne instructed Lucy, “to pass her letter to him tonight if you can without danger.”

Sometimes Lucy learned shared news about the progress of the war. “In Italy, the Americans are approaching Bologna—the town where we photographed that fountain where the women splashed water on themselves,” wrote Suzanne. One note described battle action along numerous fronts, in France, Italy, Holland, even Hungary. Lucy also read Suzanne’s detailed account of the night of their arrest, telling of Lohse, Bode, and their men searching the upstairs portion of the house while Lucy had remained downstairs.

Suzanne gave instructions about how to keep the letters. “I don’t think that there is a great risk of keeping the ones you want the most. They won’t search if there’s nothing out of the ordinary. Th e simplest way perhaps is to empty a carton of Jayes [cleaning cloths] and to put them inside, underneath some blank sheets. A sanitary napkin would be very safe, but I think that it risks erasing the pencil, and you would be very sorry.”

A few weeks earlier, one of the guards had brought Lucy a hatbox where she could keep the few items she was allowed to possess. Whenever Lucy finished reading one of Suzanne’s secret letters, she opened it and hid Suzanne’s letter carefully inside along with some drawings and notes.

As their trial approached, Suzanne lay on her bed or perched on the small stool in her cell late into the night, scratching out letters to Lucy. She labored to keep Lucy’s spirits up but revealed her own anxieties as well. “What I fear is a ‘magnanimous’ sentence, ten or twenty years in prison,” she wrote. She speculated that they might even have to serve time in Germany “to show . . . that the sentence of the military court was not a joke.” She confessed, “Maybe I’m putting things a bit too darkly, but when I learned that their planes go back and forth twice a month, it was a blow. To be shot here, that’s nothing compared with what one fears will happen over there.” She did not say exactly what frightened her, but she likely meant a concentration camp, torture, or execution. “But the only thing one can do is wait, isn’t it, trying to conserve one’s serenity—not too easy, my little chick. If one all of a sudden falls ill, maybe that simplifies things, but it’s not easy anymore to really get sick at will. We still have courage, concentration on stable and precious ideas to forget this difficult present, patience. . . .”

Suicide no longer seemed to be an option. There was little more they could do than wait.

No matter what Suzanne wrote to comfort her, as “foreign women of bourgeois backgrounds, with a nonconformist ideology,” Lucy knew the many strikes against them. In all, 739 islanders appeared before the military court on Jersey, and Lucy and Suzanne would soon be among them.