TinyMart is sharing this content, the original was posted on lgbtqnation.com by ﻿ Greg Owen Wednesday, September 7, 2022, So please click here to go there
.

Healey is the second lesbian this election cycle to earn a party nomination for governor. 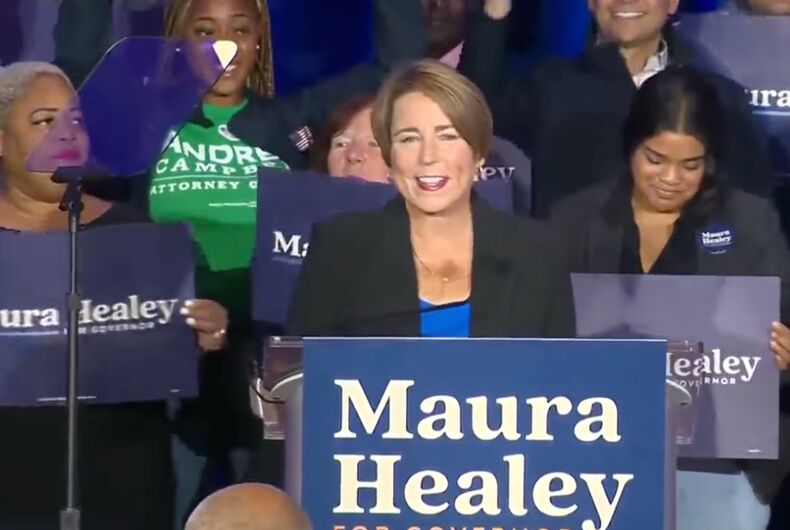 Last night in Massachusetts, Maura Healey became the state’s Democratic nominee for governor. She would be the first woman and first out lesbian elected to the post.

Healey, who was also the first lesbian state attorney general in the country, will face off against Trump-endorsed Republican Geoff Diehl, setting up a MAGA-fueled fight for the Bay State’s future.

Healey is the second lesbian this election cycle to earn a party nomination for governor, following Democrat Tina Kotek of Oregon. The pair could make history together.

“I am so proud to be able to stand before you tonight as your Democratic nominee for governor of Massachusetts,” Healey told a raucous crowd of supporters. She nodded to the sound of her latest title and added, “That sounds good.”

Healey, 51, was elected Attorney General in 2014. While in office, she took on Purdue Pharma over the opioid crisis and exposed Exxon’s climate crisis-denial. As Civil Rights Chief in the AG’s office, Healey brought the first successful challenge to the Defense of Marriage Act, helping to lay the groundwork for marriage equality nationwide. As AG, she championed non-discrimination protections for trans people in Massachusetts and pushed for gender neutral markers both federally and for the state.

She sued the Trump administration repeatedly.

“I have a message for President Trump,” Healey said at the Boston Women’s March in 2017, soon after his inauguration, “We’ll see you in court.”

Healey’s office sued the Trump administration nearly 100 times over her tenure, starting with a multi-state lawsuit aimed at overturning the Muslim travel ban, enacted just days into Trump’s term. According to the Boston Globe, she was successful in over three-quarters of the cases.

The former professional basketball player and captain of her team at Harvard describes herself as a “baller.”

She’ll need all the team work she can muster battling what’s sure to be a brutal campaign with her MAGA-backed opponent in the fall.

“He’ll rule your state with an iron fist,” Trump declared, using the same language he did for China’s authoritarian ruler Xi Jinping at a Pennsylvania rally on Saturday.

While Massachusetts voters have favored moderate Republicans in the governor’s mansion 24 out of the last 32 years, MAGA politics is anathema in the traditionally blue state. Add to that Diehl’s miserable performance in a race to unseat Senator Elizabeth Warren in 2018 — he lost the election by 24 points — and Democrats see a history-making win on the horizon.

Nevertheless, Healey was clear-eyed about the work ahead in her remarks Tuesday night to supporters and volunteers: “I ask you, as a former point guard, to leave it all with me on the court.”