TinyMart is sharing this content, the original was posted on lgbtqnation.com by ﻿ Greg Owen Saturday, August 13, 2022, So please click here to go there
.

Greene is one of three top government officials ID'd as spreading the most dangerous ideology. 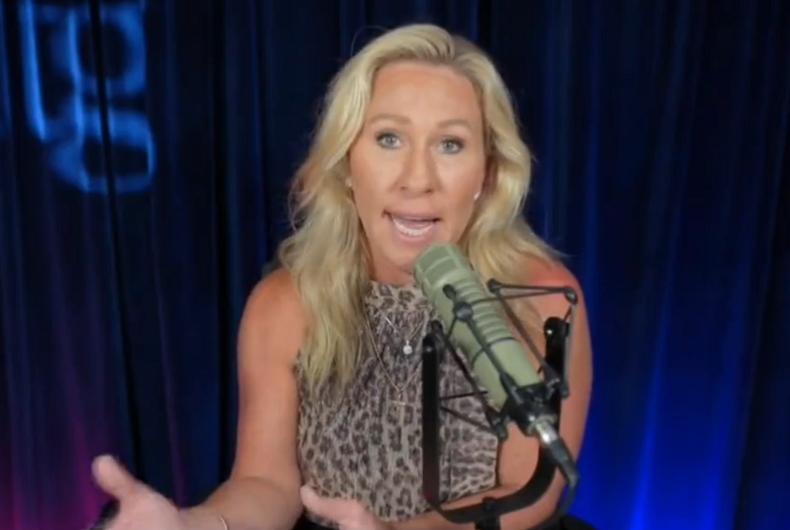 Rep. Marjorie Taylor Greene (R-GA) tops a new list of the most hateful tweets in the wake of Florida’s Don’t Say Gay law, according to a just-released study by the Human Rights Campaign.

Tweets from the top ten posters were viewed an estimated 48 million times and were “responsible for driving” the “grooming” narrative, researchers found.

Greene’s tweets in the period around the passage of the anti-LGBTQ “parental rights” bill in Florida reached 17,954,000 viewers, dwarfing the No. 2 on the list, blogger James Lindsay, with a reach of 11,792,000. Boebert, Raichik, and Pushaw earned close to 12 million impressions.

The Don’t Say Gay law, which passed in March and took effect July 1, bans instruction about sexual orientation and gender identity “in kindergarten through grade 3 or in a manner that is not age appropriate or developmentally appropriate for students in accordance with state standards.”

The study found that anti-LGBTQ grooming rhetoric surged a whopping 406% online in the weeks following the bill’s passage, for an average of 6,607 tweets a day, a huge increase from 1,307 tweets the month before. 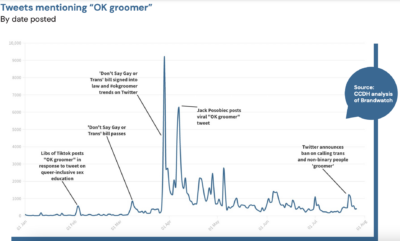 On the day DeSantis signed the bill into law, there was a marked increase in the use of the “#OKGroomer” hashtag, used as a derogatory response to tweets from LGBTQ educators, organizations and allies. On the day after DeSantis signed it, “OK groomer” tweets peaked at 9,219, or about one every nine seconds.

“Grooming” rhetoric was spread by a “small group of radical extremists as part of a coordinated and concerted effort to attack LGBTQ+ kids to rile up extreme members of their base,” the report said. 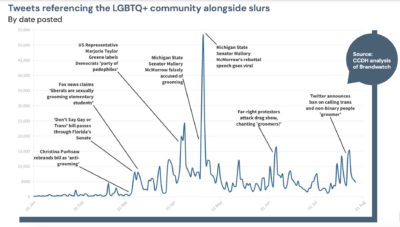 “We’re in the middle of a growing wave of hate and demonization targeting LGBTQ+ people — often distributed digitally by opportunistic politicians and so-called ‘influencers’ for personal gain,” said Imran Ahmed, CEO of the Center for Countering Digital Hate. “Online hate and lies reflect and reinforce offline violence and hate. The normalization of anti-LGBTQ+ narratives in digital spaces puts LGBTQ+ people in danger.”

Greene and Boebert did not respond to requests for comment on their rankings in the report.

“By definition, then, opponents of the law support adults talking to young children about sex and gender behind their parents’ backs.”

“My tweets did not mention LGBTQ people at all,” she claimed. “Florida’s parental rights law likewise does not single out any identity or orientation.”