TinyMart is sharing this content, the original was posted on lgbtqnation.com by  Alex Bollinger Monday, July 18, 2022, So please click here to go there
. 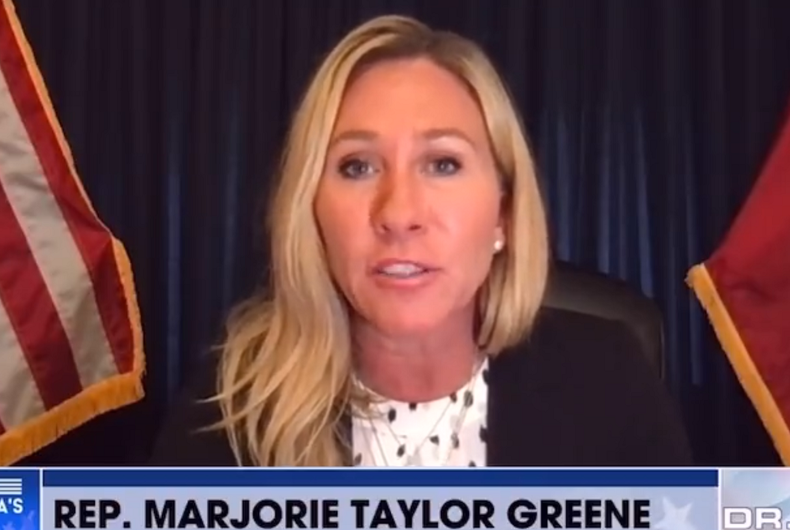 Speaking on The Rob Carson Show on Newsmax radio, Greene said that Republicans, unlike Democrats, “support women” because they want to force women to become mothers “even if it’s a circumstance that they didn’t plan.”

“The very idea that women’s rights don’t matter anymore, which is what they say,” Greene said, referring to Democrats, “and our stance for pro-life is we support women. We support their pregnancies. We support them being mothers, and even if it’s a circumstance that they didn’t plan.”

She went on to connect the issue to transgender equality, but from the other side: she said that conservatives support women’s rights to not see transgender women in public restrooms.

“We also support women’s rights, our right to privacy, our right to have privacy in our bathrooms, our right to compete in our women’s sports without being threatened by biological men,” she said. “And so, yes, all of this is a slap in our face ”

Greene went on to call out Democrats for trying to pass federal legislation to protect the right to an abortion – one of the measures being taken to protect people’s rights in the wake of the Supreme Court decision in Dobbs v. Jackson Women’s Health Organization. She called the bill, which passed the House last Friday but will face an uphill battle in the Senate, “disgusting and evil.”

“They want to make abortion legal up until the day of birth and make it available for every woman that wants it across the country and they are so angry about it,” she said. “They’re demanding it, they’re fighting for it.”