TinyMart is sharing this content, the original was posted on lgbtqnation.com by ﻿ Bil Browning Monday, October 17, 2022, So please click here to go there
.

She says she's the victim of the mob she helped to instigate. 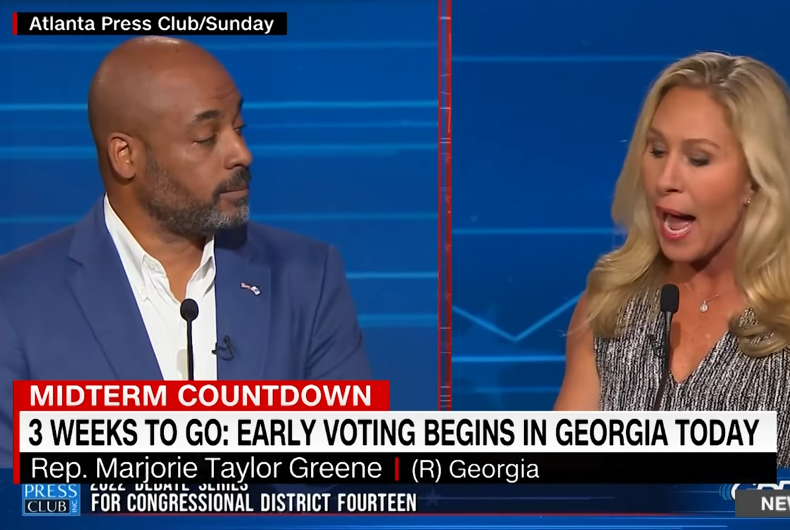 Rep. Marjorie Taylor Greene’s (R-GA) debate with Democratic challenger Marcus Flowers quickly devolved into a spectacle, but one of the strangest moments of the night involved the January 6 insurrectionists and transgender children.

Questioned by Flowers about her support for those who committed the MAGA insurrection, Greene first insisted that she was the victim of the rioters. She admitted that she opposed prosecuting the anti-democratic mob, because the government is doing its job.

When Flowers asked Greene why she was supporting insurrectionists more than the people in her district, the congresswoman tried to pivot.

She simply opposes a “two-tier justice system,” she said. “I will not stand by and watch Merrick Garland turn the Department of Justice into a political weapon and the FBI sending in after parents addressing their school boards, people who walked in the Capitol and have been held in jail for nearly two years while groups like Antifa and BLM rioters go free and never get held accountable.”

“You cannot accuse me of insurrection,” Greene said. “I was a victim of the Jan. 6 riot just as much as any other member of Congress. That was the third day I had on the job. I had nothing to do with what happened there that day, and I will not have you accuse me of that.”

When she mentioned the FBI, Greene was likely referring to the Department of Justice’s statement last year that it would investigate people who threaten to kill or harm school board members, a statement that infuriated the right at the time because, they claimed, the Department of Justice was trampling the free speech rights of people protesting mask mandates, lessons about the history of race in the U.S., and transgender equality in schools.

The conservative congresswoman has championed a wave of anti-LGBTQ politics nationwide that has resulted in bomb threats at children’s hospitals, library closures, death threats, and book bans.

Greene testified in front of the congressional committee investigating the January 6 riots and claimed that her rhetoric about a “stolen” election and the dangers of Democrats had no effect on the crowd’s beliefs. She also denied that members of her staff gave the rioters personal tours of the Capitol building shortly before the insurrection.

When Flowers asked her to confirm that President Joe Biden won the presidential election, Greene demurred. Instead, she simply said that “Joe Biden is the president of the United States.”

He told her that she helped light the spark that led to the violent attempt to overturn the election. She “drove those people to the Capitol on January 6 with your lies,” he told her.

Greene has been one of the most vocally anti-LGBTQ members of Congress this past session. In addition to posting an anti-trans sign outside her office, trying to shut down Congress to prevent the pro-LGBTQ Equality Act from passing, and filing a bill to ban and de-fund gender-affirming care for transgender youth and many transgender adults, she was one of the few Republican members of Congress to explicitly say that she was voting against the Respect for Marriage Act this past summer because she’s against gay couples getting married. Greene got her start in political activism by protesting drag queens at libraries.