TinyMart is sharing this content, the original was posted on lgbtqnation.com by  Alex Bollinger, Monday, October 10, 2022, So please click here to go there
.

She nodded as a conservative supporter said same-sex marriage is "toxic" and said "the Bible tells us marriage is a covenant between a man and a woman." 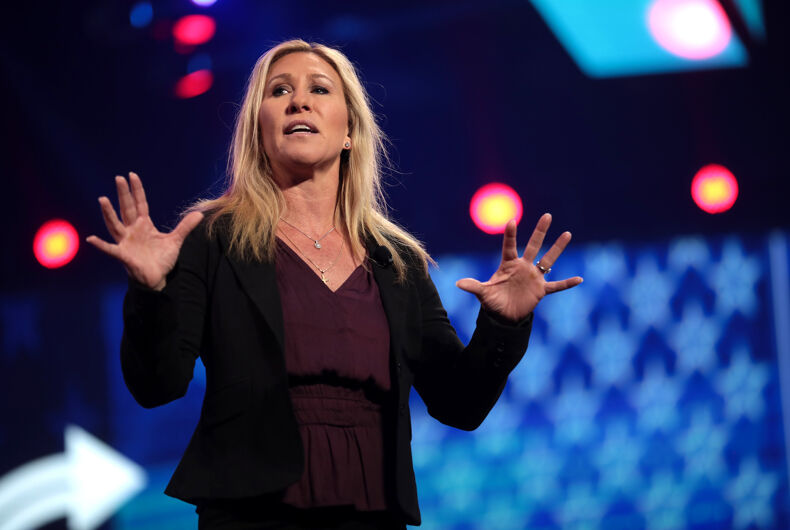 Rep. Marjorie Taylor Greene (R-GA) told supporters at a fundraising event that the path to ending marriage equality in the U.S. is through the Supreme Court because of “the balance on the Supreme Court as it stands right now.”

While speaking at an event on Wednesday, October 5 held by the America First Warehouse in Ronkonkoma, New York, Greene was asked about Obergefell v. Hodges, the 2015 Supreme Court decision that legalized marriage equality in all 50 states.

The questioner said he – and everyone he knows – was “elated” when the Supreme Court overturned the constitutional right to an abortion this past June in its Dobbs v. Jackson Women’s Health Organization decision.

“But just as toxic to the culture was the Obergefell decision that claimed marriage could be between someone other than one man and one woman,” he said as Greene nodded, apparently agreeing that two men or two women getting married is “toxic.”

“What are our chances of getting that overturned?”

“Now we know that the Bible tells us marriage is a covenant between a man and a woman. That’s what marriage is,” she said, getting loud applause from the crowd. “Do I see anything happening legislatively in Congress anytime soon on that issue, I don’t.”

Greene is correct in that the Supreme Court said that the fundamental right to get married applies to same-sex couples and is protected by the Due Process and Equal Protection clauses of the Fourteenth Amendment of the Constitution, so Congress can’t really do anything on its own to overturn that decision.

Still, Greene’s response shows both that Republicans like her want to overturn Obergefell and end marriage equality in the U.S. and that she believes that the Supreme Court – with its six-to-three conservative slant – could overturn it, despite many Republican lawmakers saying this summer that the Supreme Court isn’t going to overturn Obergefell any time soon as the midterm elections approach.

Greene has been one of the most vocally anti-LGBTQ members of Congress this past session. In addition to posting an anti-trans sign outside her office, trying to shut down Congress to prevent the pro-LGBTQ Equality Act from passing, and filing a bill to ban and de-fund gender-affirming care for transgender youth and many transgender adults, she was one of the few Republican members of Congress to explicitly say that she was voting against the Respect for Marriage Act this past summer because she’s against gay couples getting married.

“I believe that marriage is between a man and a woman and that’s how God created it,” Greene said as she voted against the measure.