TinyMart is sharing this content, the original was posted on lgbtqnation.com by ﻿ Alex Bollinger Tuesday, September 13, 2022, So please click here to go there
.

Lindsey Graham and the White House appear to agree: Voting for Republicans could put abortion rights in blue states at risk. 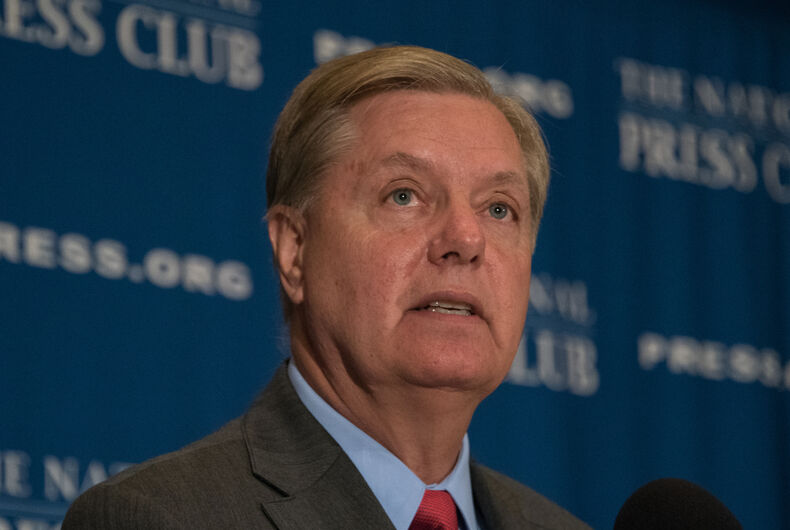 Sen. Lindsey Graham (R-SC) encouraged people to vote for Republicans in the midterm elections so that the Senate could vote on his bill to ban abortion after 15 weeks nationwide.

He was referring to a bill he introduced in the Senate yesterday that would ban abortions after the 15th week of pregnancy, despite having said earlier in the year that he believes abortion is a state issue.

In June, the Supreme Court overturned the federal right to an abortion in its Dobbs v. Jackson Women’s Health Organization decision, a decision that allowed states to enact bans on abortion before the fetus is viable. Many Republicans, including Graham, said that the decision was a victory for state’s rights.

But now Graham wants to stop blue states from allowing abortion after 15 weeks with a federal abortion ban.

“I think we should have a law at the federal level that would say that after 15 weeks, no abortion on demand,” he said yesterday.

CBS News reporter Grace Segers said that Graham was asked about Republicans saying that the issue should be left to the states and he responded: “That’s great. That’s their position. That’s a sound position. That’s not my position.”

The White House condemned Graham’s bill, saying that it “would strip away women’s rights in all 50 states.”

“This bill is wildly out of step with what Americans believe,” said White House Press Secretary Karine Jean-Pierre. “The President and Vice President are fighting for progress, while Republicans are fighting to take us back.”

Like Graham, she stressed that keeping Congress in Democratic control is key to stopping the proposed federal abortion ban.

“President Biden and Congressional Democrats are committed to restoring the protections of Roe v. Wade in the face of continued radical steps by elected Republicans to put personal health care decisions in the hands of politicians instead of women and their doctors, threatening women’s health and lives,” she said.