TinyMart is sharing this content, the original was posted on lgbtqnation.com by  Daniel Villarreal Tuesday, May 17, 2022 So please click here to go there
.

Her colleague said, "F**kin hot a** and a great bird," about her, but "unfortunately, she's a lesbian." He got fired. 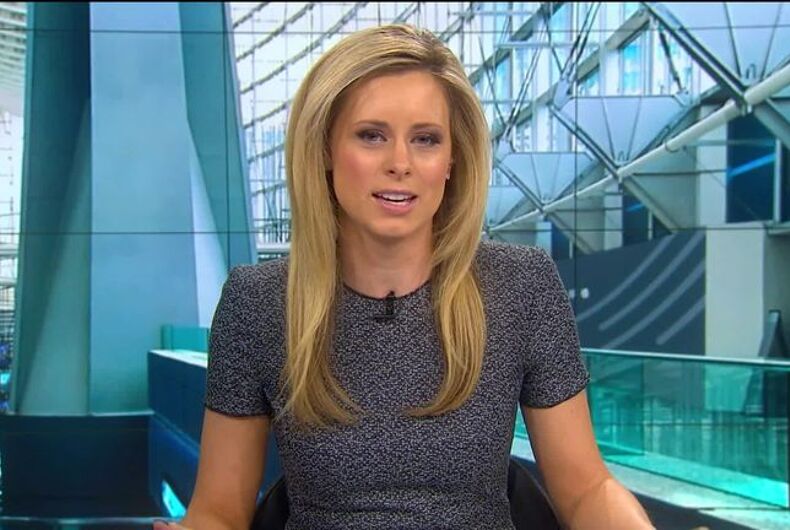 Australian Fox Sports broadcaster Megan Barnard has spoken about her experience being outed by a co-worker. She called it “dangerous” to out people and expressed thanks to those who shared their personal stories with her after she was outed.

In March, Barnard was outed as a lesbian by her colleague, Tom Morris, after audio leaked of Morris making crude comments about her. Fox Sports fired Morris, a fellow sports broadcaster, after investigating the leak, citing its “zero tolerance” policy against coworker harassment.

In the audio, Morris said of Barnard, “Unfortunately, she’s a lesbian, lads. F**kin hot a** and a great bird, like, good fun, good to talk to. Like, in my view, the hottest girl at Fox by a long way. But, unfortunately, yeah, she’s got a ‘lick-her’ license. She’s very, very good at it.”

The leaked audio quickly circulated on social media, effectively outing Barnard, a 37-year-old broadcaster who covers women’s cricket and other sports. Around the same time, a second recording also leaked in which he bitterly told people not to mistreat him just because he wasn’t a woman, a Black person, Asian, or gay.

When the outing first occurred, Barnard thanked her supporters on Instagramand added, “Fortunately, I am at a place in my life where I am comfortable with who I am and I can handle something deeply personal becoming public. But had this happened as recently as a few years ago, it would not have been the case.”

“Coming out is a process and should never be taken out of someone’s hands. Nor should anyone be spoken about in such a degrading manner,” she continued. “I hope my experience can be a catalyst for change in not just the sports industry, but in every industry.”

After being fired, Morris also issued a public apology on Twitter, stating, “I would like to unconditionally apologize to everyone for my disgusting and disgraceful comments, which became public yesterday. I am especially sorry to the person involved. No one should ever, in any place, or at any time, be spoken about in that way.”

In a more recent interview with Stellar Magazine, Barnard said, “I knew I was gay from the age of 12 … It was such a painful time during my teens, feeling what I was feeling and desperately wanting those thoughts to go away and to be like everyone else…. It took me more than a decade to come out, and I’m just grateful I hung in there and didn’t fall off the edge.”

“No one should ever be forced to come out before they’re ready; it can be dangerous,” she continued. “Some people might not think it’s a big deal in this day and age, but it still is; no one knows what you suffered when you were younger and talking about your sexuality is such a private, personal piece of you.”

After being outed, Barnard said that many people contacted her, sharing their struggles with life in the closet and their fears of being out.

“If [this interview] resonates with just one person and makes them realize it’s OK to be gay, that it’s not something to hide or run from, then sitting down for this article has been worth it,” she added.

Australia legalized same-sex marriage in 2017. While the country lacks a national LGBTQ hate crime law or bans on LGBTQ discrimination and conversion therapy, many of the country’s states and territories have individual laws addressing those issues.