TinyMart is sharing this content, the original was posted on lgbtqnation.com by  Alex Bollinger Tuesday, May 3, 2022  So please click here to go there
.

A leaked Supreme Court decision shows that the right to abortion will soon come to an end and that the decisions that legalized marriage equality and ended bans on homosexuality are on the table as well. 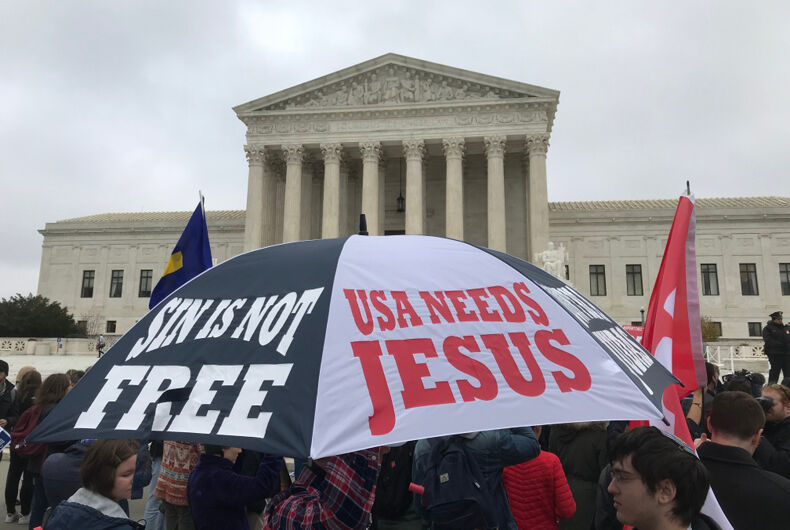 December 5, 2017-Umbrella with religious messages being displayed at the Supreme Court in support of Masterpiece CakeshopPhoto: Shutterstock

A draft of the Supreme Court decision in the abortion rights case Dobbs v. Jackson Women’s Health Organization has been leaked to the media and it shows that the Court will be overturning Roe v. Wade and that they believe their reasoning can be applied to ending marriage equality and bringing sodomy laws back, potentially overturning two of the biggest LGBTQ rights victories in U.S. history.

“Roe was egregiously wrong from the start,” Supreme Court Justice Samuel Alito wrote in the draft decision for Dobbs, referring to the 1972 Supreme Court decision that said that there is a constitutional right to an abortion while a fetus is non-viable.

The decision, leaked on Politico, shows that the Court has already voted to overturn the right to an abortion in the U.S. and the justices in the majority (it’s not known yet who is in the majority, other than Alito) are now just working on their reasoning for the decision, which could define its scope.

If Roe is overturned, each state will be able to decide whether to ban abortion or not, meaning that people who need abortions in many states will have to go to illegal providers to get them or leave their states.

Roe originally stated that the Due Process Clause of the Fourteenth Amendment provides a right to privacy that protects pregnant people’s personal decisions. That same right was later used in Lawrence v. Texas (the 2003 Supreme Court decision that ended sodomy laws, which were state laws that banned homosexuality) and Obergefell v. Hodges (the 2015 decision that legalized marriage equality in all 50 states).

Alito even mentions those specific cases on page 32 of the leaked draft, noting that the pro-choice side of the case brought them up as “attempts to justify abortion through appeals to a broader right to autonomy and to define one’s ‘concept of existence,'” and said that allowing the right to make personal decisions “could license fundamental rights to illicit drug use, prostitution, and the like.”

“None of these rights has any claim to being deeply rooted in history,” Alito wrote.

“If the reasoning of the draft becomes the majority opinion – and it is worth stressing that this is by no means assured, since it is a draft and may well be watered down by other justices – then it applies equally to Obergefell v. Hodges, which held that all marriages (including my same-sex one) are protected by the Constitution; to Lawrence v. Texas, which held that all intimate sexual activity (including same-sex) was too; and to Griswold v. Connecticut, which held that the right to access contraception is as well,” out attorney Jay Michaelson wrote for The Daily Beast.

“To be clear, Justice Alito didn’t leave this to speculation. He specifically mentioned Obergefell and Lawrence as examples of the same faulty reasoning behind Roe,” he continued. “So, in case folks weren’t listening when all those legal Cassandras warned that Roe was going to be overturned, please listen now: Gay marriage is too. Within a year or two. Unless another justice leaves the court, the constitutional right to marriage for all is going to be overturned. The only question is whether Republicans will have a veto-proof majority (or the presidency in 2024) to ban both abortion and gay marriage anywhere in the nation.”

“I’m not sure where that leaves my custody of my child, but I can tell you that I am certain that my family will not be protected by the Constitution two years from now.”

In 2020, Justices Alito and Clarence Thomas released an opinion saying that the right for same-sex couples to get married needs to come to an end because of its “ruinous consequences for religious liberty.” Those consequences were that religious people are sometimes called homophobes and therefore their “liberty interests explicitly protected in the First Amendment” were violated.

“Obergefell enables courts and governments to brand religious adherents who believe that marriage is between one man and one woman as bigots, making their religious liberty concerns that much easier to dismiss,” Thomas wrote.

So at least two Supreme Court justices have publicly stated that they want to overturn Obergefell. A majority could sign Alito’s opinion saying that there is no constitutional basis for the right to marry who one chooses.