TinyMart is sharing this content, the original was posted on lgbtqnation.com by  Daniel Villarreal Friday, June 24, 2022, So please click here to go there
.

"If you want to see an error in judgment, Clarence Thomas, look in the mirror," said the lead plaintiff in the case that legalized same-sex marriage nationwide. 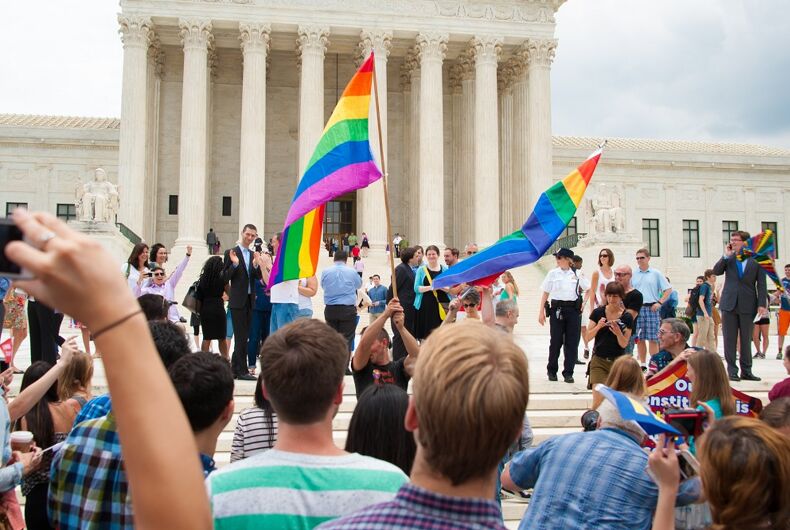 A crowd gathers at the U.S. Supreme opinion after its ruling legalizing same-sex marriage in all fifty states was delivered on June 26, 2015Photo: Shutterstock

Thomas wrote that, even though the Constitution doesn’t explicitly mention abortion rights, the Supreme Court “erroneously” decided in the 1973 Roe v. Wade decision to treat abortion as a fundamental right that should be free from government interference, something known in legal terms as “substantive due process.”

In response, Obergefell made a statement, saying, “Clarence Thomas is a Supreme Court justice appointed by humans, he is not the Supreme Deity. The millions of loving couples who have the right to marriage equality to form their own families do not need Clarence Thomas imposing his individual twisted morality upon them. If you want to see an error in judgment, Clarence Thomas, look in the mirror.”

Now that Roe v. Wade has been overturned, 17 states have “trigger laws” that could immediately outlaw abortion. Some of those states will do that by defining life as beginning at fertilization. This re-definition is likely to impact the ability of infertile and LGBTQ people to have children via in vitro fertilization (IVF), the fertility treatment that implants eggs with sperm for implantation in a gestational parent.

IVF usually involves fertilizing multiple eggs to increase the likelihood of the treatment being successful. Once the gestational parent becomes pregnant through IVF, medical professionals discard any extra fertilized eggs.

“Without the protections of Roe v Wade, it is possible that state lawmakers may feel empowered to create barriers for people to access medical procedures like IVF – which is deeply troubling for LGBTQ+ people and anyone who needs access to IVF to expand their family,” Shelbi Day, Chief Policy Officer at the nonprofit organization Family Equality, told LGBTQ Nation.