I’m a transgender journalist covering the war in Ukraine

TinyMart is sharing this content, the original was posted on LGBTQNATION by  Sarah Ashton-Cirillo Thursday, March 17, 2022, So please click here to go there
.

Here's how I ended up covering the Russian invasion of Ukraine from the frontlines for LGBTQ Nation. 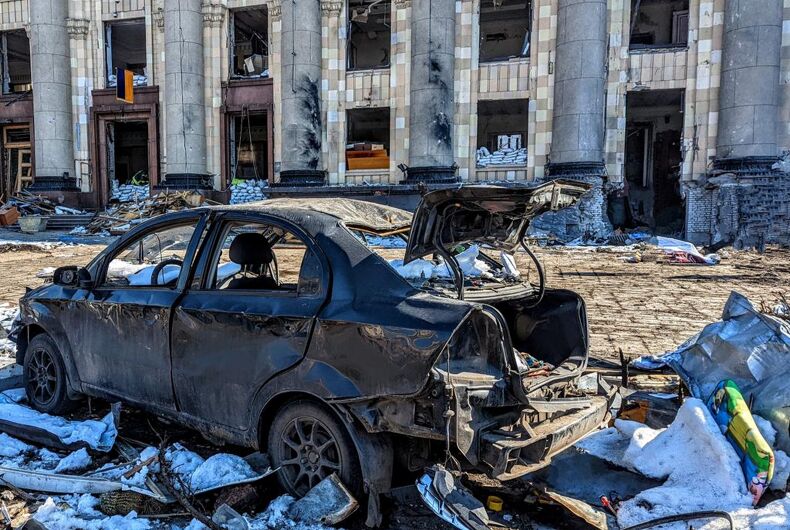 The regional council building in Kharkiv was bombarded in the early morning on March 17.Photo: Sarah Ashton-Cirillo

Waking up in a car parked on a muddy alleyway 30 minutes from the front lines of the Battle for Kharkiv was an inconceivable notion to me 3 days ago. Yet in the front seat of a beaten down Jeep Cherokee, I slept. Artillery blasts and other sounds of war created a cacophony of destruction throughout the night. However, in a world where a former US President is refusing to outright condemn the barbaric and terroristic actions unleashed by the tyrannical head of Russia against a steadfast ally, and an out transgender journalist is at the front lines of the major European land war in 2022, is anything truly inconceivable?

More than six years ago, pre-transition, I embarked on an attempt to cover the “Syrian Refugee Crisis.” Beginning in Turkey, and then heading into the Balkans, I crossed Europe, ending my voyage on the shores of the English Channel by spending several days in Calais, France inside the sprawling migrant encampment known as “The Jungle.”

In total, I went overland across 11 countries following the stories of these displaced peoples from Syria, Iraq, and Afghanistan, as well as several African nations, while also examining a European Union which was both unprepared and unwilling to fully integrate them into their societies. Ultimately, the book that came from it, Along the Tracks of Tears, was a woefully incomplete look into the lives of those whom I set out to report on, and this failure by me to dive fully into the deepest crevices of their torment is something that had haunted me ever since.

In 2015, I eagerly accepted the opportunity to go into Syria and speak directly with some of those fleeing from their home soil during the civil war there. Going so far as to cross the Bosphorus Strait and travel deep into the eastern part of Turkey, fear eventually swept over me. I caved to concerns of being kidnapped or killed and abruptly canceled my plans. Pangs of regret began to fill me from almost the moment of turning around, weighing heavily on my work.

Another aspect of that sojourn that gnawed at me was living as a male during my travels. At the time, pretending to be a guy wasn’t anything new. I’d lived as one for almost 40 years at that point, but guilt over the lie had begun to impede all of my undertakings, an impediment magnified by being given space among the majority Muslim male refugees who I presume would otherwise have shunned the true me. And so my publication, weighed down by those two burdens, fell far short of what it could have been.

In the time since, much has happened to me personally and professionally. I published a novel, finally transitioned, and eventually became heavily involved in Nevada politics, the last area leading to the launch of a politics and news portal focused on the state.

Then in 2022, Russia invaded Ukraine and with that arose an opportunity to create a follow-up to my 2015-2016 coverage of the previous European refugee crisis – and this time attempt to do it right.

Beginning in Poland and then crossing into Ukraine, before eventually traversing the Ukrainian countryside, I arrived at the front, intent on learning about every aspect of what the victims of the invasion are enduring through photography, interviews, and personal observation. Along the way, I also realized the stories I uncovered, and the intertwined narratives which wove them together, were both much deeper and broader than I’d initially comprehended.

That first night we took cover in the darkness, camouflaged against a sky offering a canopy of infinite blackness because it was simply too dangerous to traverse the city streets after curfew. As soon as the light of morning peaked, we headed into the ravaged city, checkpoint after checkpoint lining the streets. While in many areas of Ukraine the blockaded streets are manned by volunteers from the Territorial Defense Forces, those asking for documents in Kharkiv are members of the professional, full-time, Ukrainian Armed Forces. Though we were stopped at an innumerable number of checkpoints on the more than 1,000 km drive through the nation’s heartland, the last search, the last flash of my credentials upon entering the city’s center, was truly the most poignant. It separated me from reading about war, and having listened to it, to witnessing it.

After being waved through into the downtown corridor, destruction enveloped me. Burnt out vehicles, blown out windows, decimated apartment buildings, and deep craters all pocked the landscape. Death too was present.

And yet residents of Kharkiv moved deftly around these reminders of war crimes and terrorism, lining up to get medicine, buy food, and withdraw money from banks, as life continued through 24 hours a day of enemy bombardment and Ukrainian counter-offensives.

The apartment I procured while at the frontlines promised to offer an expansive visage of the city. It didn’t disappoint, but as I quickly learned life at war changes hourly, and so I’ve spent a total of three hours in the accommodations since I arrived here.

Around 6 pm on my second evening, the group I’m embedded with decided to take cover for the evening in a restaurant, and the same on our third. Chairs, some blankets, a pillow, and contagious amounts of patriotic courage from my hosts have helped me find sleep during the explosive nights.

Operating as a hub of activity for various security services, the restaurant is now the location where I work, eat, sleep, and digest the toll that the Russian invasion has taken on the population of Ukraine and the global community as a whole.

Two weeks have gone by since I’ve arrived in Europe and 10 days since I entered a nation during the throes of war. In that short span, a realization settled in.

I came to Ukraine to cover a refugee crisis, I’m now reporting on a war.

Is anything truly inconceivable?