TinyMart is sharing this content, the original was posted on lgbtqnation.com by  Greg Owen, Tuesday, July 19, 2022, So please click here to go there
.

"These children (of God) do not belong to our (religious) family." 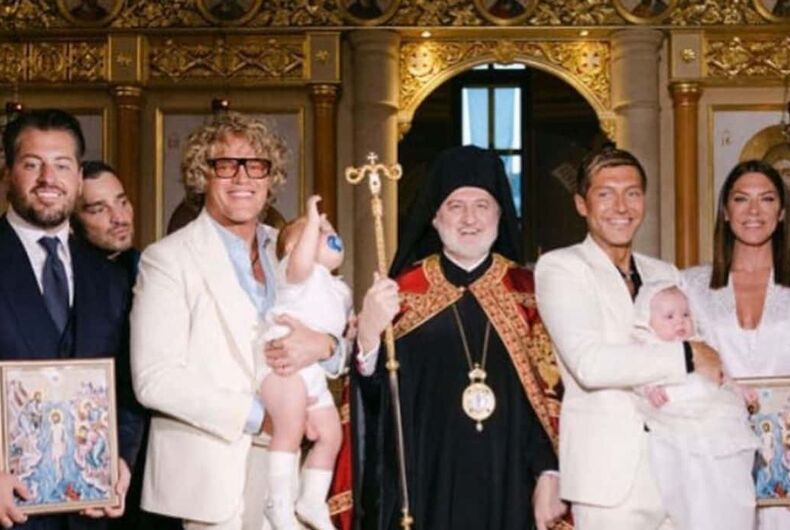 A baptism near Athens, Greece two weeks ago for the children of a same-sex couple has earned an official protest from the Greek Orthodox Church.

Fashion designer Peter Dundas and longtime partner Evanggelos Bousis witnessed the christening by Archbishop Elpidophoros of America, who was in Greece on a private visit. The couple have a son and a daughter via surrogacy. Bousis is of Greek descent.

The Holy Synod’s complaint was made following receipt of a letter to leadership from local Bishop Antonios of Glyfada, who wrote he granted permission for the baptism of Dundas and Bousis’ children but was unaware the ceremony involved a same-sex couple.

“His eminence the Archbishop of America acted unilaterally, on his own initiative and in an improper manner, in the full knowledge that these children (of God) do not belong to our (religious) family,” Antonios said.

A statement published on its website Tuesday said the governing Holy Synod of the Greek Orthodox Church would send letters of complaint to the U.S. church and to Ecumenical Patriarch Bartholomew, spiritual leader of the world’s Orthodox Christians, who presides from Istanbul, Turkey.

According to the Human Rights Campaign, “the Greek Orthodox Archdiocese lists homosexuality beside fornication, adultery, abortion, and abusive sexual behavior as ‘immoral and inappropriate forms of behavior in and of themselves.'”

The Church asserts these behaviors “attack the institution of marriage and the family.”

The baptism was greeted as sign of progress in the Church by the family before news of leadership’s protest broke.

“Yesterday was truly a special moment not only for my family and me but for our entire Greek Orthodox Church… Thank you to our great spiritual leader, his Eminence Archbishop Elpidophoros of America, for christening the babies and not turning away any child or member of our faith,” George Bousis wrote on Facebook.

Dundas is well known in the fashion world as a designer for Roberto Cavalli, Jean Paul Gaultier, and Emilio Pucci. He started his own label in 2017, when he dressed a pregnant Beyoncé  for the 2017 Grammy Awards. Bousis runs the business side of the company.

Hostility to baptizing children of same-sex couples has bubbled up at the same time acceptance of same-sex unions and marriages has grown.

In 2014, a Catholic bishop in Wisconsin took control of baptizing children of LGBTQ parents from local parishes because of “a plethora of difficulties, challenges, and considerations associated with these unnatural unions (including scandal) linked with the baptism of a child” of same-sex parents.

In 2005, Canadian Cardinal Marc Ouellet refused to baptize the children of gay and lesbian parents. “We cannot accept the signatures of two fathers or two mothers as parents of an infant,” he said.

In 1999, a United Methodist pastor in the small town of Wahpeton, North Dakota refused to baptize a baby raised by lesbian parents. There was no way, the pastor said, the child could get a proper Christian upbringing. The couple left the church.