TinyMart is sharing this content, the original was posted on lgbtqnation.com by ﻿ Daniel Villarreal Thursday, September 8, 2022, So please click here to go there
.

The Proud Boys, Gays Against Groomers, and Moms for Liberty were all in attendance. 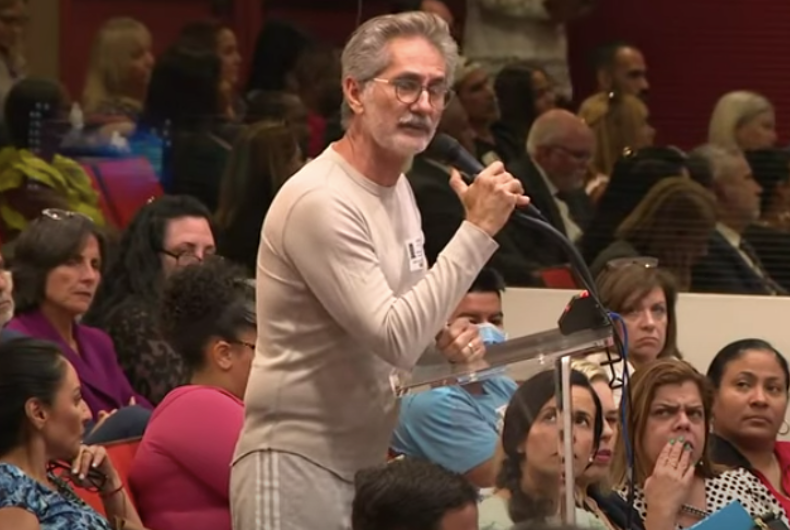 A speaker at the school board meetingPhoto: WPLG screenshot

The Miami-Dade School Board voted against recognizing October as “LGBTQ history month” over fears that it would violate the state’s infamous “Don’t Say Gay” law.

During the board’s six-hour Wednesday meeting, members of the Proud Boys extremist group stood outside of the meeting place, intimidating pro-LGBTQ allies. The anti-LGBTQ groups Gays Against Groomers and Moms for Liberty also made appearances at the meeting place, one local observer said.

The rejected resolution also would’ve encouraged the district superintendent to explore the feasibility of expanding 12th-grade history and civics lessons to include landmark Supreme Court decisions that furthered LGBTQ rights. Parents would’ve had the opportunity to opt their students out of the lessons.

The board voted to recognize LGBTQ history month last year as a way to make LGBTQ students feel more accepted and to educate all students about the contributions of queer Americans. But the “Don’t Say Gay” law’s March passage made board members uneasy this time around. After numerous speakers spoke against the measure, the board voted against it in a 8-1 vote.

Even though the “Don’t Say Gay” laws explicitly forbids educators from acknowledging LGBTQ issues in classes from kindergarten through third grade, the law also forbids LGBTQ content from being taught in higher grade levels “in a manner that is not age appropriate or developmentally appropriate.”

The law’s broad language has made educators worry that LGBTQ-themed lessons could land them in legal trouble, even if presented to older children, since the law allows parents to sue any school district that violates it.

“I do believe [recognizing LGBTQ History Month] is in direct violation of our parental rights bill,” board member Christi Fraga said before voting against the measure. “If not so directly, in spirit, it is. Because this is saying a full endorsement in the entire district of this month — that includes kindergarten through 12th grade.”

Board member Lucia Baez-Geller, who introduced the measure, said, “This item does not indoctrinate students, it does not force an agenda on students. And, as was stated incorrectly, this item does not take away parental choice.”

School board Vice President Steve Gallon said that he had an “obligation to follow the law” separate from his “personal predispositions, my love for all humanity, my commitment to inclusivity and access and representation,” Business Insider reported.

Michael Rajner, a meeting attendee who supported the measure said, “‘Don’t Say Gay’ is why this crowd is here to oppose this. They do not want us to exist. They want us to kill ourselves. They want us to continue to strip protections from us…. The marginalization of lesbian, gay, bisexual, transgender people that has been institutionalized to push us to the margins, to strip us of marriage equality — our struggle is real our struggle is history.”

Eulalia Maria Jimenez, an attendee who is also the head of the Miami chapter of the anti-LGBTQ group Moms for Liberty, said, “This [measure] is a direct slap across the governor’s face as well as to a large part of the community who do not support using the school system to sway the children in any which way regarding sexual identity.”

The local group Miami Against Facism posted a series of tweets noting that more than 10 Proud Boys and the group Gays Against Groomers both made appearances outside the board meeting.

In one video taken outside the meeting, a Proud Boy walks up to a person waving the transgender flag and says, “Get that gay sh** outta here … f****t” before flashing a white power hand gesture. Proud Boys across the nation have disrupted child-friendly drag events while accusing drag performers, LGBTQ people, and allies of being “groomers” seeking to sexually abuse children.

Gays Against Groomers put up a digital mobile billboard outside of the meeting which read, “Let kids be kids.” In the past, the group has compared gender-affirming medical care for transgender youth to Nazi-era medical experiments.