TinyMart is sharing this content, the original was posted on salon.com by ﻿

Same-sex marriage doesn't have "strong bipartisan support." Most Republicans in Congress reject it 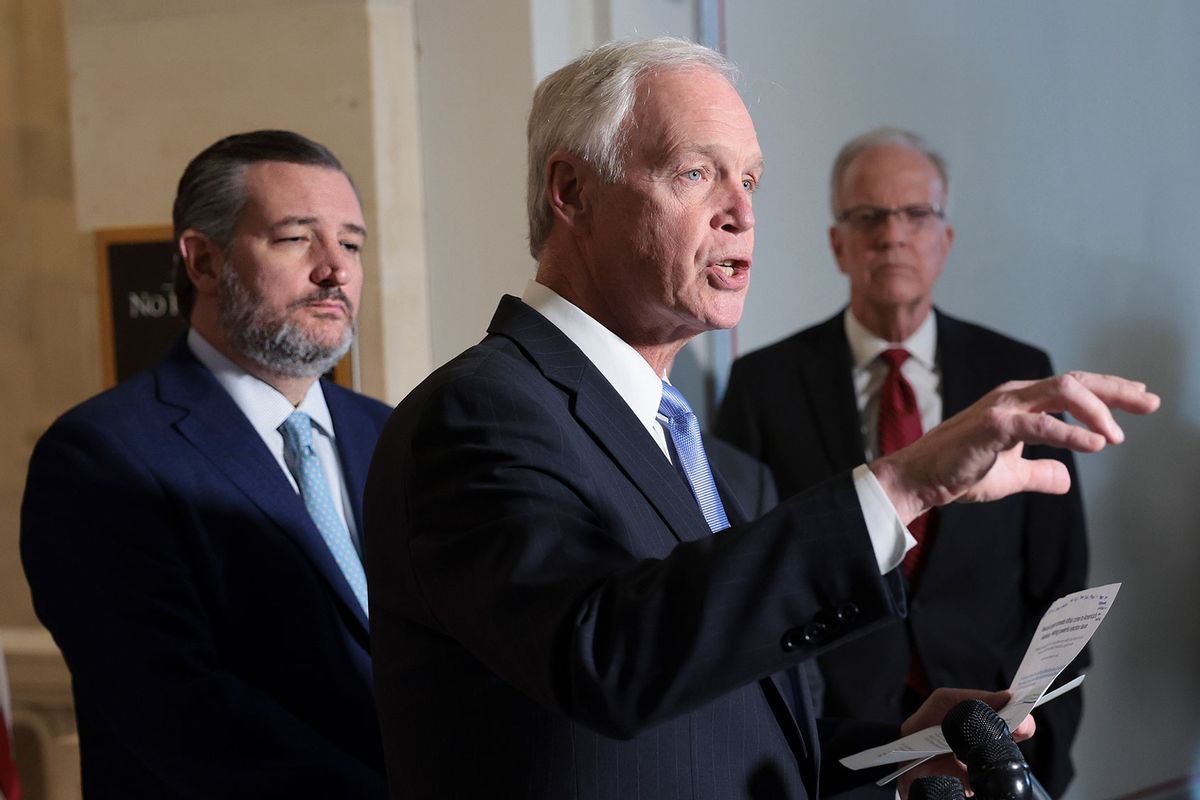 The Senate is back from recess, and legislators are facing down a daunting to-do list to complete before the November election, including passing appropriations bill and confirming more of President Joe Biden's judicial nominees. Additionally, there's now increasing pressure to make time for a vote on the Respect for Marriage Act, which would offer limited protection to bolster previous Supreme Court decisions legalizing interracial and same-sex marriage in the face of this summer's blockbuster decision from the court striking down Roe v. Wade's landmark legalization of abortion.

The bill was passed in the House earlier this summer in response to the court's unprecedented move of taking away a right once granted. Such a move on its own would have raised fears that the court would next overturn other decisions that granted rights like same-sex marriage and birth control, but Justice Clarence Thomas erased any lingering doubts that such things are next on the religious right's wish list by explicitly inviting lawsuits challenging those previous decisions.

Republicans are in an electoral double bind.

So Sens. Tammy Baldwin, D-Wis., and Susan Collins, R-Maine, called on their colleagues to pass new protections by arguing in a Washington Post op-ed on Tuesday that such legislation is "bipartisan." After arguing that "a majority of Democrats, Republicans and independents" support same-sex marriage rights, the two note that the legislation already passed through the Democratic-led House with "strong bipartisan support." The goal of these two senators isn't mysterious. Passing the bill through the Senate requires getting past the filibuster. That, in turn, means convincing 10 Republicans to join the slim 50-vote Democratic majority in the Senate to back the bill. Their op-ed was about persuading wary Republicans that it's safe and, in fact, savvy to back this politically popular view.

But to call the bipartisan support for same-sex marriage "strong" is, at best, political embroidery.

Same-sex marriage has strong Democratic support. In fact, it's unanimous, with all 220 House Democrats backing the bill and the expectation that all 50 Democrats in the Senate will. Only 22% of House Republicans, however, were willing to vote for same-sex marriage. Digging into the numbers, things look even worse on the GOP side. As an analysis from the Washington Post shows, a significant number of those Republicans who did support the bill "are retiring or represent districts in Democrats' sights in the midterms."

That doesn't make it impossible for the bill to pass through the Senate, to be clear. If 20% of Republican senators vote for the bill, that's enough to drag it across the finish line. It's still not clear if that will happen, however.

A few Republican senators have publicly indicated support, but many are being tight-lipped about where they stand. Baldwin told reporters that she expects a vote on the bill during the week of Sept. 19. But things took a dim turn this week, when Baldwin's fellow Wisconsin senator, Republican Ron Johnson, declared that he had no intention of voting for the bill, arguing that the Supreme Court was wrong to legalize same-sex marriage in the first place. Johnson was reportedly one of the senators who LGBTQ rights advocates had hoped to get on board. He is up for re-election in a swing state this year and had previously been coy about his position, leaving hope that he would attempt to appeal to moderates by backing the bill. This loss is a bad blow for those hoping to pass the bill.

The Republican opposition to abortion rights is hurting them in the polls already. Adding their opposition to same-sex marriage to the pile will only reinforce the Democrats' message: Republicans are right-wing radicals who are wildly out of step with the mainstream on social issues.

But even if LGBTQ advocates manage to cobble together 10 votes for this bill, that shouldn't be taken as serious evidence that Republicans have become more moderate on this issue. It's not just that the vast majority of Republican politicians oppose same-sex marriage. The attacks on LGBTQ rights have only been escalating in GOP circles in the past couple of years. Across the country, Republicans are passing laws to ban books and censor teachers for acknowledging the existence of LGBTQ people. Policies to bar gender non-conforming kids from playing sports and to punish families for supporting LGBTQ kids have also been enacted. In Texas, the Republican Party platform declared that homosexuality is an "abnormal lifestyle choice." Sen. Rick Scott of Florida, the head of the National Republican Senatorial Committee, released an 11-point blueprint for the GOP this year which stated that the "traditional familiy" is "God's design for humanity," and asserted that a Bible quote about the "male and female He created them" should be the guide for government policies. In response to the Respect for Marriage Act, specifically, the GOP's House Freedom Caucus put out a statement declaring that the "radical left" has "attacked the norms of masculinity and femininity, and now it wants to further erode the sacred institutions of marriage."

The "radical" left in this case represents over 70% of Americans who support same-sex marriage, a number which includes 55% of Republican voters. The disconnect between where voters stand and where the Republican political establishment stands is understandably puzzling. Why don't Republicans moderate their views to reflect where their voters are?

Because Republicans are in an electoral double bind.

On one hand, their most dedicated and enthusiastic voters — the ones who show up for primaries, donate money, and volunteer — disproportionately come from a Christian nationalist base with radical right-wing views. They're rigidly opposed not just to abortion, but contraception and reject the constitutional separation between church and state. And because Christian conservatives vote in large numbers in primaries, they've pushed the elected representatives far to the right. On the other hand, the general election voters Republicans need to win office tend to be more moderate, especially on "social" issues like LGBTQ rights and reproductive health care access.

Republicans generally try to square this circle by passing draconian laws to please their Christian right base while attempting to obscure their views from the larger public. This strategy is playing out dramatically this election cycle on the issue of abortion. After the Roe overturn, Republican state legislatures have been moving quickly to pass ever more punitive abortion bans, frequently rejecting moderating amendments allowing the procedure for rape victims or for patients who are in medical crisis. But often those same politicians turn around and misrepresent their views to the public, running ads and making statements meant to reassure voters they won't vote for the anti-choice policies they have and will almost certainly continue to vote for.

Senate Minority Leader Mitch McConnell, R-Ky., understands intimately that it's easier for Republicans to win elections if the voters are ignorant of how far-right the party's policy views actually are. He's been blocking efforts by Republicans to release a party platform, precisely because he knows it would contain language on reproductive rights, LGBTQ rights, and other issues where the GOP opposes the majority views. He was not happy with Rick Scott going behind his back to release the 11-point pseudo-platform for precisely this reason. It created multiple news cycles in which the actual views of Republicans, which most voters reject, were publicized.

This likely explains why so many Senate Republicans are playing peek-a-boo with their intentions on the Respect for Marriage Act. Senate Majority Leader Chuck Schumer, D-N.Y., may be reluctant to bring it to a floor vote without knowing if it's going to pass or not. As long as it's not brought up for a vote, Republicans can play both sides of the issue, letting their Christian right base's wishes prevail without alienating general election voters who are unaware of how anti-gay the mainstream GOP is. Once there's a vote, however, it forces them into a binary choice of alienating one group or the other.

This all shows why it's smart politics for Democrats to bring the Respect for Marriage Act up for a vote in the next few weeks, regardless of whether they know where the whip count stands. If they get 10 Republican votes, then they've passed a popular policy that also prevents some — though not all — potential legal fights over same-sex marriage rights in the future. If they don't get the 10 votes, however, it's still a political win, if not a policy win. The Republican opposition to abortion rights is hurting them in the polls already. Adding their opposition to same-sex marriage to the pile will only reinforce the Democrats' message: Republicans are right-wing radicals who are wildly out of step with the mainstream on social issues.