TinyMart is sharing this content, the original was posted on lgbtqnation.com by  Bil Browning Friday, July 22, 2022, So please click here to go there
.

Ron Johnson is the fifth GOP senator to break with party orthodoxy in a sign that the bill could pass with bipartisan support. 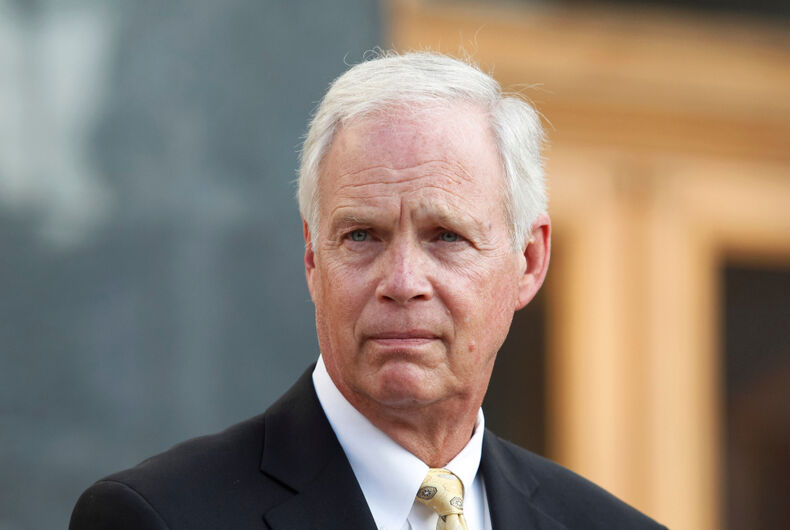 Sen. Ron Johnson (R-WI) has announced that he will “not oppose” the passage of the Respect for Marriage Act. Johnson is the fifth Republican to break ranks with party orthodoxy on same-sex marriage. The bill would codify marriage rights for same-sex and interracial couples.

Johnson is not a dependable LGBTQ ally. He supports giving corporations a legal right to discriminate against LGBTQ people, for example. Earlier this year, he told an anti-vaccine activist in an interview that it “may be true” that the COVID-19 vaccines are giving people AIDS.

Johnson has gotten a score of “0” for the last several years on HRC’s Congressional Scorecard, showing strong opposition to LGBTQ equality.

This isn’t the first time that Johnson has bucked the party’s anti-LGBTQ stancesthough. He vocally opposed former President Donald Trump’s ban on transgender military members, saying, “I think any law-abiding American who wants to serve the nation should be able to.”

So far, only eight GOP senators have announced they would vote against the measure. Senate rules require 60 out of 100 senators to vote to end the debate on a bill, and there are only 50 Democrats in the Senate.

If passed, the bill would officially repeal the Defense of Marriage Act (DOMA), the 1996 law that forbade the federal government from legally recognizing same-sex marriages. In its place, the act would require the federal and state governments to recognize same-sex marriages as long as they occurred in states that offer them. If any state refuses to recognize such marriages, the act says, the spouses can sue.

The House of Representatives voted on the Respect for Marriage Act earlier this week. Proponents of the bill argue that it’s necessary now that the Supreme Court overturned Roe v. Wade, ended the federal right to an abortion, attacked the idea of substantive due process rights, and suggested that marriage equality could be next.

All Democrats in the House voted for the bill along with 47 Republicans. 157 Republicans voted against it.