TinyMart is sharing this content, the original was posted on lgbtqnation.com by  Alex Bollinger, Tuesday, July 26, 2022, So please click here to go there
.

Rep. Glenn Thompson is "thrilled" to have a new son-in-law but has voted against LGBTQ rights every chance he's had. 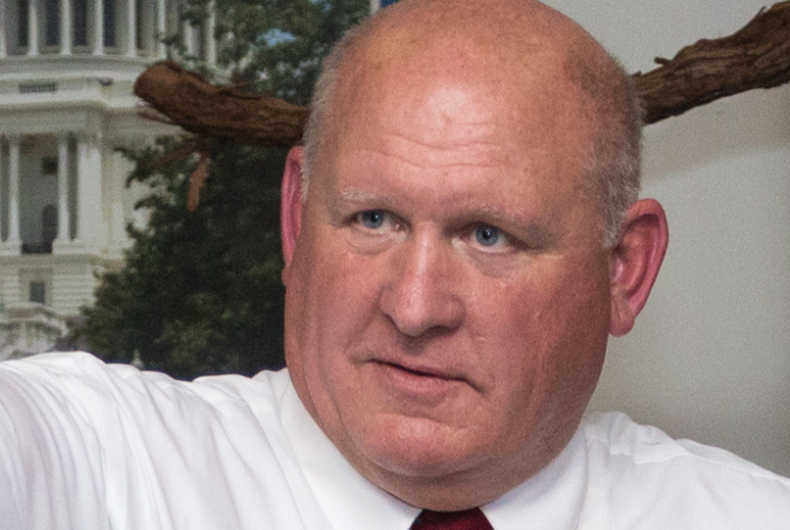 A Republican Congressmember is facing public scrutiny for attending his own son’s wedding with another man just days after he voted against same-sex marriage rights.

Rep. Glenn Thompson (R-PA) voted against the Respect for Marriage Act (RMA) last Tuesday. If passed, the bill would require states and the federal government to recognize same-sex and interracial marriages performed by other states should the Supreme Court take away those rights in the future.

Three days later, on Friday, he attended his son’s wedding to another man.

This past Monday, Thompson’s son told NBC News that he “married the love of [his] life” on Friday, and Thompson’s press secretary Maddison Stone confirmed that the Congressmember attended.

“Congressman and Mrs. Thompson were thrilled to attend and celebrate their son’s marriage on Friday night as he began this new chapter in his life,” she said in an email. She also wrote that the Thompsons were “very happy” to welcome their son-in-law “into their family.”

Before his son’s wedding, Thompson explained that he was one of the 157 House Republicans to vote against the RMA because he thought it would be a win for Democrats in an election year.

“This bill was nothing more than an election-year messaging stunt for Democrats in Congress who have failed to address historic inflation and out of control prices at gas pumps and grocery stores,” he told the Centre Daily.

Proponents of the RMA say that it’s necessary now that the Supreme Court has shown a willingness to overturn rights based on the notions of privacy and substantive due process in overturning Roe v. Wade. LGBTQ legal victories like Obergefell v. Hodges (which legalized same-sex marriage) and Lawrence v. Texas (which ended state bans on homosexuality) were cited by Supreme Court Justice Clarence Thomas in his concurring opinion as decisions the Court should “reconsider” in light of the end of the federal right to an abortion in the U.S.

Out Democrats have been critical of Republicans who say it’s a waste of time to protect marriage rights for same-sex and interracial couples.

“If it’s not necessary, then vote for it. If you’re right that we’re worried and we shouldn’t be, reaffirm it,” out Rep. David Cicilline (D-RI) said in his floor speech. “But don’t hide behind that to justify your refusal to vote for marriage equality in this country.”

“If they don’t want to spend a lot of time on this, they can vote ‘yes,’ and move on, and that would be really reassuring for a lot of families around America, including mine,” out Secretary of Transportation Pete Buttigieg said on CNN this weekend.

While Thompson attributed his vote against the RMA to the election year, he has a long track record of opposing LGBTQ equality. He has gotten a score of zero on HRC’s Congressional Scorecard for the past three sessions of Congress, showing his solid opposition to LGBTQ people’s rights.

He voted against the Equality Act, which would have added sexual orientation and gender identity to federal civil rights legislation, in 2021, which wasn’t an election year.