TinyMart is sharing this content, the original was posted on lgbtqnation.com by  Bil Browning, Thursday, July 21, 2022, So please click here to go there
.

Glenn Greenwald, who had lost most of his liberal cred other than gay rights (he's not good on trans issues either), has now squandered the little bit he had remaining. 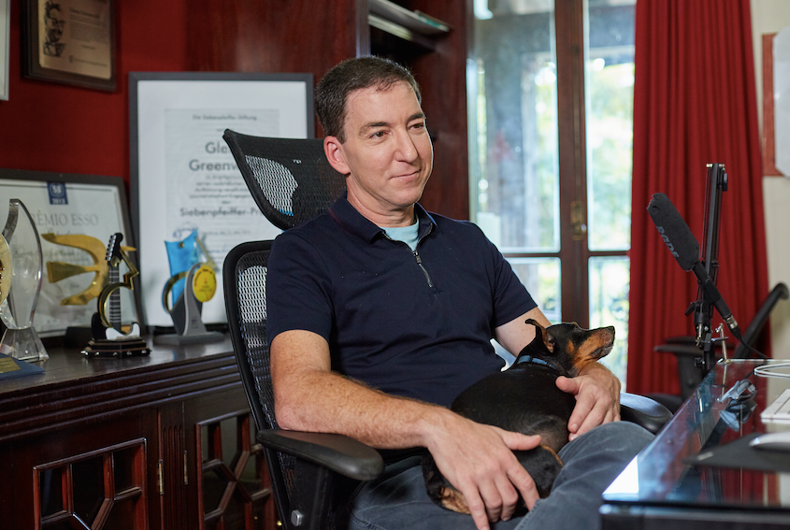 Journalist Glenn Greenwald was once a liberal who fought against bigots, the corrupt, and for LGBTQ rights. But in recent years, as Greenwald has taken a hard turn to the right, he’s found himself in some unusual company.

This time, Greenwald, who lives in Brazil with his husband, is defending far-right Rep. Matt Gaetz’s (R-FL) vote against a bill that would codify same-sex and interracial marriages into law. Gaetz is currently under investigation by federal authorities for sex trafficking an underage girl.

The bill sailed through Congress with bipartisan support, but the vast majority of Republicans voted against it. It currently awaits passage in the Senate; some Republicans have already announced their support for the bill.

But Greenwald, who had lost most of his liberal cred other than gay rights (he’s not good on trans issues either), has now squandered the little bit he had remaining. He chose to take the moment to praise Gaetz as an LGBTQ ally.

“In 2015, Florida banned adoptions by same-sex couples. The bill in the lower house to rescind that ban was sponsored by then-State Rep. Matt Gaetz,” Greenwald tweeted. “It passed the Senate only because he convinced his father, a powerful GOP Senator, that the ban was wrong.”

“Yesterday, Gaetz was one of the House Republicans to vote against codification of Obergefell (same-sex marriages). That NO vote wasn’t due to opposition to marriage equality but to his view that individual states have always regulated marriage, not the federal government.”

“This is all false,” one Twitter user pointed out. “The ban was ruled unconstitutional 5 years earlier and wasn’t being enforced. Gaetz did not sponsor the bill. There is no evidence Don Gaetz was convinced by his son to support overruling the ban, as he had been in favor of gay adoption for years.”

Another person got even more specific debunking Greenwald’s defense of someone who voted against his right to be married to his partner.

“It wasn’t co-sponsored by matt gaetz,” they responded in a multi-tweet thread. “gaetz added an amendment to allow homeschooling of adopted children, which was banned after it was found that considerable amounts of home-schooled foster children were being mistreated and malnourished. The original bill sponsored by gaetz… had no specific text about homosexuals being allowed to adopt. It was added to get support from democrats in the florida house to pass other measures that gaetz wanted in the bill. If the florida house democrats didnt exist then the text wouldnt have been added.”

“Also, the ban on homosexual adoption was ruled unconstitutional in 2010 by a court in miami. Why did gaetz wait 5 years to add it as an amendment in a bill that was unrelated to the actual case at hand? Your application of credit is misguided.”

They followed up with links to the actual legislation and its history through the legislature.

Greenwald won a Pulitzer for his role in publishing sensitive military security documents that were leaked to him by Edward Snowden. The former contractor with the National Security Agency is now living in sanctuary in Russia under the protection of Vladimir Putin to avoid facing espionage charges in the United States.

Greenwald has also been a passionate defender of Chelsea Manning, who was sentenced to 35 years in prison for providing sensitive information to WikiLeaks. President Barack Obama commuted the sentence to the seven years Manning had already served as he left office. The site would go on to assist President Donald Trump in 2016 by leaking emails potentially damaging to the Democratic Party and Hillary Clinton.

Manning has said that she is “terrified” of Greenwald. She has publicly described him as “greedy” and “unprincipled,” adding that she was “embarrassed for ever considering you a friend.”

And so Greenwald, who has made it a priority to defend bigots and corrupt far-right politicians in recent years, made it clear that gay rights – and his own marriage – was no longer an issue that he held dear either.