Gay U.S. ambassador to Hungary is a “power of example”

TinyMart is sharing this content, the original was posted on lgbtqnation.com by ﻿ Greg Owen, Monday, November 21, 2022, So please click here to go there
.

David Pressman arrived in Budapest two months ago with his husband and their two children and made a point of sharing the event on social. 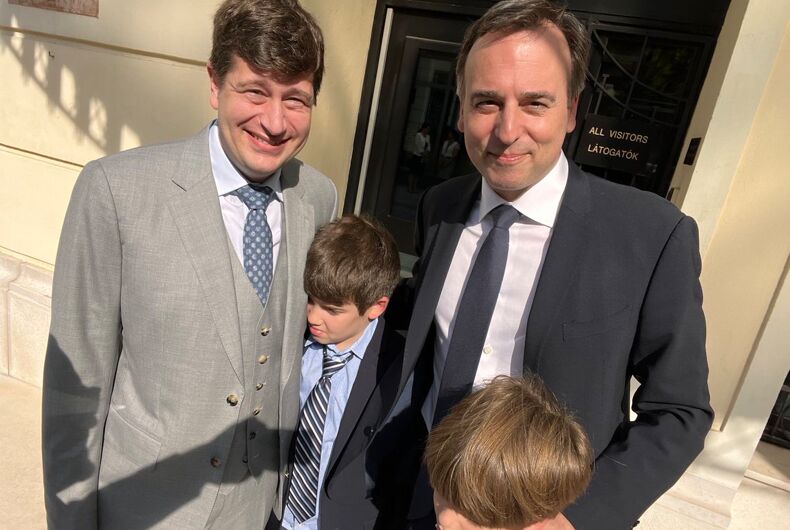 The traditional role of ambassador to a foreign nation is to observe, report, and relay their government’s sentiments to the host nation. In the case the Biden administration’s appointment of David Pressman to Hungary, it’s more like dropping a wasp into a hornet’s nest.

Pressman, 45, is all of those things, but the setting is the EU’s authoritarian problem child, Hungary, and the time is now, when the country’s right-wing prime minister, Viktor Orbán, is leading a culture war at home and threatening Europe’s unity against Russia’s war on Ukraine abroad.

The new U.S. Ambassador to Hungary arrived in Budapest two months ago with his husband and their two children and made a point of sharing the event on social.

“I think it speaks for itself,” Pressman tells Politico in an interview. “Sometimes the power of example is the most powerful way we can communicate about shared values and concerns.”

Orbán’s ruling party, Fidesz, recently banned portrayals of LGBTQ content to minors. Last May, transgender individuals were prohibited from altering gender markers on government IDs, and in December, the country amended its constitution to ban adoption by same-sex couples.

“The United States will always engage on behalf of communities that are vulnerable or marginalized, and that are under pressure — and here in Hungary, there are a few of those,” the ambassador says.

Orbán’s culture war and authoritarian tendencies have made him a darling of MAGA Republicans, even earning the prime minister a speech at CPAC over the summer in Dallas, where he received roaring approval denouncing immigration, gay marriage, and “mixed race” societies.

Biden’s appointment of Pressman, and his Senate confirmation the very same week as Orbán’s CPAC appearance, were an indication the U.S. would not be addressing the relationship with Hungary in a traditional fashion.

“The Foreign Minister made it clear that when Hungary sends ambassadors to a foreign nation, they are not sent there with the aim of becoming provincial governors who are expected to interfere in the internal political processes of their hosts,” wrote English-language daily Hungary Today in August. “To the contrary, they are expressly forbidden to do so.”

Since then, Pressman has become a state-media whipping boy, a representative of Fidesz-loathed American Democrats and the embodiment of immoral liberal democracy.

“Our work is not about liberal policies. It’s not about conservative policies,” Pressman says. “But it’s fundamentally about shared core values that are premised upon small ‘d’ democracy, and ensuring that we are able to collaborate together.”

Social media has been one of Pressman’s most eye-catching weapons in a nontraditional diplomatic arsenal.

When Orbán joined Twitter in October and asked where his “good friend” Donald Trump was, Pressman punched up: “Welcome to Twitter, @PM_ViktorOrban! While you look around for your friend, perhaps another friend to follow: the President of the United States, @POTUS… but as the Hungarian media might say: no pressure.”

Another exchange with the prime minister was prompted by a personal note from Trump, and Orbán’s fanboy response: “Always great to hear from our good friend @realDonaldTrump. Let’s make US-HU relations great again!”

Pressman responded: “With Hungary facing economic challenges and Vladimir Putin’s war on its doorstep, the time for a great US-HU relationship? Right now.”

One Fidesz-aligned media outlet, among the many obsessed with Pressman, called the ambassador’s efforts at transparency “clown diplomacy.”

Pressman is undeterred. There’s a “need to be both respectful and more candid about what we’re seeing,” he says. “I’m concerned when I see missiles flying from Moscow into children’s playgrounds in Kyiv — and see the foreign minister of Hungary flying into Moscow to do Facebook Live conferences from Gazprom headquarters.”

Speaking up about injustice and leading by example are part of a broader U.S. strategy to lay bare the effects of anti-democratic values.

“All of that is with the intent to pull us closer together — not to push us apart.”

While Pressman doesn’t take the attacks on him personally, he does add: “I’m the representative of the United States of America. It’s unusual to find yourself in an environment quite like this.”