TinyMart is sharing this content, the original was posted on lgbtqnation.com by  Alex Bollinger Friday, August 5, 2022, So please click here to go there
.

"The days of radical activist politicians sexualizing our kids are over," the "humorless" Tudor Dixon said about a lesbian politician joking about drag queens. 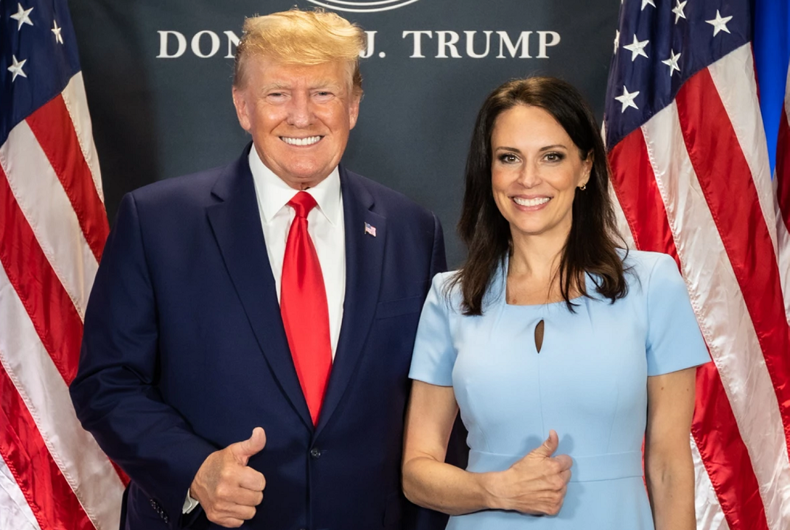 Tudor Dixon, who was an intern on The Rosie O’Donnell Show after graduating from college but before she started her acting career, just won the Republican primary gubernatorial election in Michigan on an anti-LGBTQ campaign, getting a plurality of the vote in 80 of the state’s 83 counties.

The Trump-endorsed candidate made opposition to LGBTQ rights a central theme of her campaign. Her campaign website promises she’ll “ban school personnel from talking to Kindergarten-3rd grade children about sex and gender theory secretly behind their parents’ backs,” language that harkens to Florida’s Don’t Say Gay bill.

In a separate section, her campaign website says she’ll “protect young girls” – not by taking sexual abuse seriously or fighting sexist discrimination in schools, but by banning transgender kids from participating in school sports as their gender.

In June, Dixon got into an argument on Twitter with the state’s out attorney general Dana Nessel, who joked that there should be “a drag queen for every school.”

“Attorney General Dana Nessel ‘proudly’ announced she is coming for our kids,” Dixon wrote, not actually quoting Nessel. “The days of radical activist politicians sexualizing our kids are over.”

“This is the most humorless take imaginable on a comment made in jest,” Nessel responded. “I expect more from the star of Buddy BeBop vs the Living Dead,” she added, referring to Dixon’s role in the 2009 horror/comedy film.

“Your benefactor, [Secretary of Education during the Trump administration] Betsy DeVos, has been a greater threat to school children in Michigan than drag queens have ever been.”

“Dana,” Dixon responded, “I’m calling out your party’s current efforts to normalize the sexualization of children. And you have nothing meaningful to say.”

“As the top law enforcement officer in Michigan, will you join me to criminalize involving children in sexualized drag shows?”

Which is why it’s surprising that Dixon worked on The Rosie O’Donnell Show, which ran from 1996 to 2002 and was hosted by Rosie O’Donnell, who came out at the end of the show’s run. O’Donnell famously fought back against Donald Trump as he bullied her publicly for years.

Dixon later worked as a production assistant on Oprah Winfrey’s Oxygen Network and had roles in several films, including as a teen “bopper” in Buddy BeBop vs the Living Dead and a vampire in the show Transitions.

She has defended her work even though she attacks drag performers.

“They’re bringing up movies that were made — obviously — for adults,” she said. “These are not movies that are pornographic in any way.”

While Dixon’s poll numbers were weak earlier in her campaign – she got fourth place with five percent support as recently as June in one poll – she publicly supported Trump’s lie that he actually won the 2020 presidential election and earned his endorsement. With backing from the mega-wealthy family of anti-LGBTQ DeVos, she was able to increase her name recognition and sweep the state earlier this week in the primary election.

That turned out to be true, at least for some voters.

“I didn’t know Tudor until Trump mentioned her,” Grand Rapids resident Mark Orsinger told PBS. “She seems like an OK person. I only know her from 20 seconds of a commercial.”